Art Moody practices what he preaches.

His sermon often reiterates the common sports mantra of taking things one game at a time. So as he was about to finish off win No. 200 as girls soccer coach at Flint Powers Catholic last week, he saw it as it was, a regular-season victory against Flint Carman-Ainsworth.

“I didn’t have any idea,” said Moody, who earned that 200th win May 17. “I didn’t think I would (get to 200) this year. I kind of have a motto and we’ve been going by it for quite a while with the girls, and that’s to make sure they take it one game at a time, and I think that’s kind of how I went, too. We make sure to look at one game, and when the next games comes, if we learn from the game we just had, we can bring it to the next game and we’re going to be successful.”

Success has been a common theme during Moody’s 11-year run at Powers, as he’s compiled a 201-41-20 record in his 11 seasons, which includes a 16-1-3 mark this season for the reigning MHSAA Division 3 champions. The Chargers have won a pair of state titles under Moody (2011 and 2017) and have advanced to five Division 3 Finals.

“When we looked at this year coming up, the question everyone had on their mind was, ‘Can you repeat?’” Moody said. “We had the same thing happen when we won the state championship in 2011 and we came back in 2012 ranked No. 1. It’s kind of funny, because at that time, I got my 100th win, so it’s kind of ironic and history is almost repeating itself with my 200th win following a state championship year. We have little goals, and getting an amount of wins isn’t something I look at as a personal goal. It’s more of a team goal. So it was a surprise, but a good surprise.”

Moody is a New Jersey native who played collegiately at West Chester University in Pennsylvania. He coached at Lapeer West High School before taking over the Saginaw Valley State University men’s program in 2006. He’s also coached the Powers boys, and at the club level.

“Definitely my highlight is with my girls at Powers,” he said.

Powers has averaged 18 wins per season since Moody took over in 2008, reaching 20 or more wins on five occasions. Never in Moody’s 11 seasons have the Chargers had a losing record.

The Chargers have won 10 District titles, eight conference titles and seven Regional titles. A run at an 11th District title begins Tuesday at home against Corunna.

Moody took over a successful program that had reached the Finals three times between 2000 and 2007, including the year prior to Moody coming on board. But he’s taken the Chargers to new heights, as the 2011 title was their first. 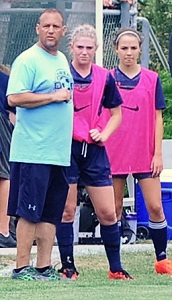 “(Former coach Tom Anagnost) had those girls getting very competitive, and he had that program kind of getting up there,” Moody said. “Tom definitely introduced Powers soccer into a successful program, so when I got it it was good timing, and I’ve continued his legacy.”

Assistant coach Jeff Tippett, who has been on Moody’s staff all 11 years, said Powers has played mostly attacking soccer under Moody, but that his formations and strategies can change based on personnel, which has made him so successful.

“It’s just Art’s coaching style; he’s got a great coaching style,” Tippett said. “He relies a lot on his assistants. Between myself and Mike Korhonen, he’s very inclusive of us in his gameplan and his coaching philosophy, and I think that helps a lot. Art’s just a good strategist, he can see the game really well, he can read the players really well, and he can put together a lot of things out of what he has to work with.”

Moody also has had plenty of talent to work with, as any successful high school coach would need. One former player, Ally Haran, went to Wake Forest University and was drafted by the Seattle Reign of the National Women’s Soccer League this past January. She’s currently playing professionally in Iceland.

“Once in a while, we do get a couple very, very talented soccer players that can play at the next level, and it’s great to have them come out,” Moody said. “But we also get that other type, we get that great athlete who plays three sports, who plays basketball and then decides to play soccer. They’re not going to play college soccer, but we’re getting them to play at a high level and love the game. That’s more of a delight to me.”

Record-wise, this year’s team is one of Moody’s best, and while he wouldn’t flat out say it’s a team capable of repeating as Division 3 champion, he did say it’s capable of competing at a high level. The Chargers’ lone loss this season came against Grand Blanc, the No. 5 team in Division 1.

He said the team is playing with a target on its back, which is typical for Flint Powers teams in most every sport as the school’s history of athletic success is well known throughout the state. But for Moody’s soccer program, it’s become a little more pronounced, and he’s fine with that.

“They come in the first day of tryouts and that’s the first conversation we have is about expectations and how much heart and determination you have to have to get to that level,” Moody said. “Teams want us pretty bad, and they know if they can beat us, sometimes that’s a successful season for them. It’s something we’ve learned how to deal with. It’s definitely a challenge, and the girls have accepted it. It’s a double-edged sword, because that pressure is definitely something they do have to deal with. But it’s a good problem to have.”