WILLIAMSTON – The Flint Powers Catholic girls soccer team hadn’t experienced a figurative bolt of lightning like this during its MHSAA Tournament run.

Holding on to a one-goal lead and just over 20 minutes from clinching another title – and having not allowed a goal in the playoffs to that point – Powers saw Freeland make a play Saturday and not only score on Powers, but tie the game and make it a brand new contest for the Division 3 championship.

However, Powers’ outage was only temporary.

“At first, we were like ‘Oh, they got us,’” Powers junior Rachel Rasins said. “But we have great energy and great attitude. We all picked it up right away, and we got it back.”

Powers certainly did get it back, as Rasins scored her second goal of the game with 15:43 remaining to give the Chargers a 2-1 victory and their second straight championship.

Powers also beat Freeland in last year’s Final, but it was a different game in the rematch.

Freeland was making its first appearance in a girls soccer championship game last year, and nerves at the start seemed to play a role in Powers jumping out to a 3-0 lead by halftime en route to a 4-0 victory.

With 8:52 remaining in the first half, Rasins got loose in the left corner of the box and fired a shot that snuck between the goalkeeper and a defender along the near side of the post to give Powers a 1-0 lead. 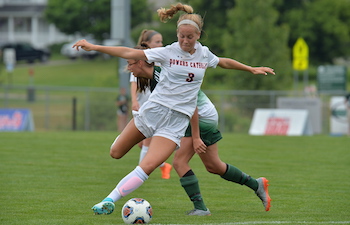 Freeland started to generate chances in the second half and came close hitting the crossbar with just under 30 minutes remaining.

The Falcons got the board with 21:12 to go. Freshman forward Molly Hemgesberg took a pass from senior Mackenzie Strobel with space in the box and rifled a shot into the net to tie the game at 1-1.

But Rasins rose up again just as it appeared overtime was around the corner.

With 15:43 remaining, Rasins took the ball off of a short corner kick and found space once again in the left side of the box, taking advantage by ripping a hard shot past the keeper and into the net to give Powers a 2-1 lead.

“I was thinking to serve, but (the defender) left that whole gap,” Rasins said. “It was right there.”

Powers finished a season that carried the weight of expectations from the beginning, given the quality and quantity it returned from last year’s title-winning team.

The Chargers finished 23-1-3, with their only loss to Division 1 runner-up Grand Blanc.

“We had that target on our back being state champs last year and being ranked No. 1 all year,” Powers coach Art Moody said. “The girls recognized that target on their back. Freeland wasn’t scared of us at all, which was great for them.”

Freeland outshot Powers in the second half by a 9-4 margin and had six corner kicks in the half after being outplayed statistically in the first.

The Falcons finished 22-5 and mounted another impressive run to the Final despite being ranked only No. 18 entering the postseason.

“It was a really good game,” Freeland coach Lauren Kemerer said. “It was fast-paced. It was back-and-forth. In the second half, I thought we were the better team. We just couldn’t finish.”

VIDEO: Rachel Raisins scored both goals for Flint Powers Catholic; here's the game-winner coming off a restart with 16:43 to play.