For the second year in a row, Calvin Christian wiped out a one-goal deficit against Clarkston Everest/Waterford Our Lady of the Lakes and then held off a barrage of shots late in the second half to win the title with a 2-1 victory.

It was the third consecutive year that Calvin Christian defeated the Lakers in the Division 4 championship game.

“It was so similar to last year,” said Calvin Christian coach Tim TerHaar, whose team finished 24-1. “They hit the crossbar late last year, and our keeper came up big.

“I said it last year, and I’ll say it again this year: The margin between winning and losing between two great teams is so small.”

This one was no different. After a scoreless first half, Calvin Christian held a 4-1 lead in shots on goal. The first shot on goal was not taken until the 16th minute.

The scoreless tie was broken in the 50th minute when Clarkston Everest/Waterford Our Lady defenseman Claire Lasceski got the ball in front of the net and beat the Calvin Christian goalkeeper to the left for a goal.

It did little to dampen the confidence of the Squires, and it wasn’t solely because of the same situation from last year’s title game. Calvin Christian trailed in its Semifinal against Muskegon West Michigan Christian on Thursday before rallying for a 3-1 victory.

“We were down in the Semifinal in the pouring rain, and we spoke of our confidence at halftime, knowing that we were still OK,” TerHaar said. “I think that experience on Wednesday night meant a lot to us.

“We haven’t had a lot of close games – the game on Wednesday night was the first time we had to come from behind – and I’ll be honest, I think that helped us at least believe. You preach that you believe when you get down, but until you do it, you don’t know how your team is going to react.” 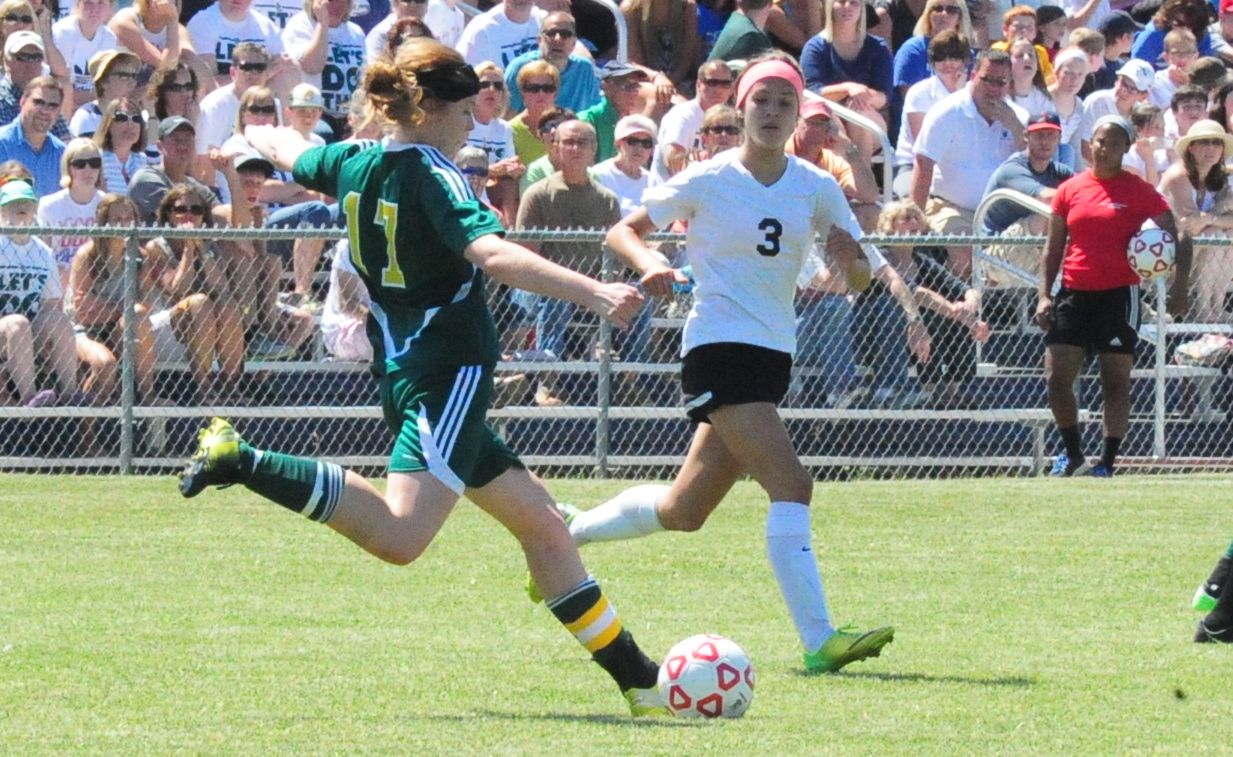 Ten minutes after Lasceski’s goal, Calvin Christian tied it when sophomore forward Whitney Koets scored on an unusual shot. Lakers goalkeeper Megan Luttinen was drawn out of the net to challenge Koets, who was unable to get off a solid shot. Instead, it trickled past Luttinen and made it to the net.

“I still don’t believe it; it was pretty surreal,” said Koets, whose goal was her 25th of the season. “Hilary Curry did a head past me right into space, and all I thought was to just get something on it, so I did what I did.

“It seemed like it took a long time to get to the net. I thought someone was going to come up and take it out of there.”

The game-tying goal added momentum to Calvin Christian, and just three minutes later, junior midfielder Emily VanVliet scored the go-ahead goal as she shot to the left side of the net from the right side of the box.

“Every coach teaches you to shoot toward the back post, so that is what I did; I shot to the back post looking for that open net,” VanVliet said of her 17th goal of the season.

From there, the remainder of the game was frantic, especially for Squires goalkeeper Allison Keizer, who had the majority of her eight saves in the final 10 minutes.

Clarkston Everest/Waterford Our Lady was relentless in its attack, forcing Keizer to come up with a handful of huge saves, including some off corner kicks, down the stretch.

“It was stressful,” Keizer said. “They were pressing hard, and we were really going at it. We stepped up our game, and we really stuck with them and battled.”

Keizer pointed to one save in particular that she felt was huge.

“I think the one where I had to deflect it out of the end was pretty scary because I made a mistake and started coming out for the ball when I shouldn’t have,” she said. “I ended up backing up trying to fix it, and I ended up being able to fix it.

“It’s scary for me because my heart starts pumping.”

The player who threatened to score the most for the Lakers was senior forward Anna Robb, who came into the game with a team-high 19 goals.

“I wish we had taken more shots earlier in the game, but their keeper did a really good job,” Robb said.

Keizer’s heroics late in the game did not go unnoticed by either coach.

“Allison came up huge to snag a few balls late that could have been goals,” TerHaar said.

First-year Lakers coach Courtney Shegos was pleased with the way her team finished but was disappointed with a few defensive lapses.

“I told the girls to push up, push up, and we got hungry, and their keeper kept them in the game,” Shegos said. “She made a couple of prime saves, so really that was all we could do – to try to put some pressure on them and try to find the net. It could have gone either way.

“We made two mistakes in our coverage, and they capitalized on them. It’s as simple as that.”

The Lakers finished 17-2-1 and will wait until next spring to continue their pursuit of a first MHSAA championship since 2010.

“I wanted it for them, and I wish we could have done it, but I couldn’t have been prouder of the way they played.” Shegos said.

TerHaar praised the play of the Lakers.

“It’s a cruel game, really,” he said. “I don’t think they deserved to lose, based on the game that they played. I’m super-proud of our ability to come back from being down, but boy, they played a great game.”

TerHaar had a more difficult time explaining how it feels to coach in three consecutive championship games.

“It’s hard to put into words, to be honest,” he said. “We’ve been a good program for a long time, but it took us a while to fight through the South Christians and Unity Christians of the world in our Districts.

“I’m proud of our players. At the end of the day, it’s about having a team that, as a coach, you enjoy coaching, and that starts with girls who just enjoy playing and enjoy playing for each other. This team defines that.”