Playing in her final high school game Saturday, Jamieson scored what turned out to be not only the last goal of her career, but also the entire season in Division 4.

Her tuck inside the near post was the decider as Lansing Christian claimed its second consecutive MHSAA title with a 1-0 win over Kalamazoo Christian at Williamston High School.

“You can’t get much better than that,” Jamieson said. “It’s fun to end the year with a final goal. My final goal was in the state championship, and it was the final thing I’ll do at LCS. It’s pretty exciting.”

With 14:46 remaining the first half, Jamieson took a long pass from junior teammate Rilyn Ross in the left corner of the penalty box, beat a defender one-on-one and put a shot past the keeper to make it 1-0 Pilgrims.

It turned out to be the only goal of the game as the Pilgrims and Comets met in the Division 4 Final for the second consecutive season.

In 2017, Lansing Christian scored the first goal in overtime and thought it was on its way to the title before Kalamazoo Christian scored off of a corner kick with four minutes left in the second overtime period to force a shootout.

A year later, the Pilgrims won title No. 2 by holding on to the early lead through relentless pressure up front, winning balls in the midfield and playing stout defense on the backline. 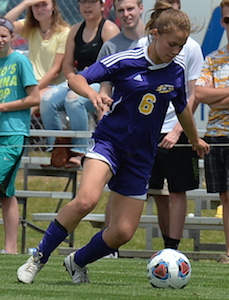 “That’s how they scored on us last year,” Vande Kopple said. “My stomach was up in my throat. But (goalie Lynn Cullens) and our defense were amazing. We didn’t give up a goal the whole tournament run.”

Lansing Christian indeed held on and now will say farewell to a senior class that will be hard to top in the future.

“It was a great way to send them off,” Vande Kopple said.

“We battled to the end,” Kalamazoo Christian head coach Jay Allen said. “We made a few mistakes in the back there. In a game like that, you make one mistake and you lose.”

While disappointed over losing in the Final for the second straight year, one look at the roster offers a smile for Kalamazoo Christian.

The Comets graduate just two seniors off their squad, Carmen Katie and Madelyn Batts, and will return 10 sophomores and three freshmen.

“It’s a loaded roster, but what you have to understand is that those two seniors kept that roster together,” Allen said. “They brought the team together, led the team and got us to where we are. It was their leadership.”

VIDEO: Lansing Christian's Kasey Jamieson scores the lone goal of the Division 4 Girls Soccer Final with under 15 minutes to play.