Boyne City is a force to be reckoned with on the girls soccer pitch.

Katie Harmeling still remembers when that wasn’t the case.

“Our first two years we were struggling a lot,” said the Ramblers’ senior defender. “We got mercied a lot of the time. Just had a lot of trouble as a team.”

The Ramblers won just six games during an inauspicious first two years of Harmeling’s career, but my how things have changed.

Boyne City went undefeated through the regular season last year while winning its first Lake Michigan Conference title and started off this year with an unbeaten streak of seven games. The only game the Ramblers have failed to come out of victorious was a 1-1 draw with league rival Harbor Springs. Otherwise, they have been dominant, winning games by an average of six goals and posting five shutouts along the way.

“We’re continuing to improve each game we play,” said senior keeper Cora Hauger. “Now that we’re getting into the thicker part of our season, we’re starting to figure out what needs to be done and we’re starting to connect more as a team and work together in that sense. We keep improving each game.”

Boyne City received a big boost, and began to see its fortunes turn around, when a large and talented class of freshmen joined the program last season after years of honing their skills at the youth level and on the club circuit. Seven started in their first year, and right from the beginning they showed they were ready to lift the Ramblers to new heights in spite of their youth.

“I knew (we) were going to be getting a good influx of players coming in,” said head coach Ed Fantozzi, who is in his fourth year leading the varsity. “The youth program is excellent. It feeds a lot of kids. It’s building, even on the boys side. It’s a great feeder program.”

Because Boyne City had never experienced success in girls soccer, the common belief was that the Ramblers were catching teams by surprise last year. That’s not the case now, however, as Boyne’s reputation has changed quickly. The Ramblers suddenly have a bulls-eye on their backs.

“Last year we came out of the gate and nobody knew who we were,” said Hauger. “This year we’re battling back from everybody knowing who we are. We kind of have to overcome that in the sense that nothing we do is surprising. Everybody knows about the big throw-ins. Everybody knows who our shooters are. Everybody knows we have a strong midfield. We just have to play our game.”

The light is now shining brightly on the Ramblers, and they are proving capable of handling the added attention they’ve brought upon themselves.

“People are focusing on us more than they might have in the past,” said Fantozzi. “It brings a different dynamic to the season. Winning is awesome, but it’s also one of those things where you have to learn how to deal with it. We have a young team and they’re handling it well. They’re a very mature group.” 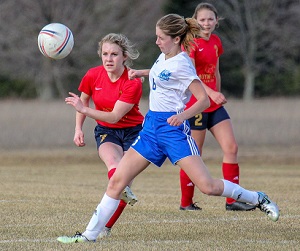 Boyne City has a well-rounded squad overall. The Ramblers possess dynamic goal-scoring ability and are backed by a stout defense.

“We don’t look at it like one person is the reason why we are winning. It’s a team effort,” said Fantozzi. “The twins (Jordan and Taylor Noble) are phenomenal forwards, but without the rest of them they’re not going to be phenomenal by themselves. It is all of us who are doing this — from me, to the two assistant coaches that are helping out, to all the girls — we are a team. We work together. We win as a team, we lose as a team and we tie as a team.”

Knowing it could now win games and championships, Boyne City wanted to take the next step and bolstered its schedule this season. The Ramblers already have played, and beaten, much larger schools such as Traverse City Central and Alpena. They also have a match next month against Freeland, the Division 3 runner-up last year.

“That was one of our first steps this season was to get some highly-competitive games that pushed the envelope, that shook things up a little bit,” said Fantozzi. “We can pick up nonconference games and say, ‘Oh, we want to pad our record,’ but we’re really trying to pick up as many games that push us past our limits, put us out of our box of comfort.”

It’s all in an effort to perhaps add more championships to the board on the gymnasium wall; the program finally was able to attain a board detailing the school’s girls soccer titles when it won a league crown. The Ramblers are looking to repeat in the Lake Michigan Conference as well as win postseason hardware. Last year Boyne City saw its season end in heartbreaking fashion with a 2-1 overtime setback to Harbor Springs in the District Final. That loss came after it had beaten the Rams twice during the regular season.

“To be cut short on our season was very hard,” said Harmeling. “We were all very upset. It was really hard all around. That loss has given us something to work toward this year.”

The Ramblers don’t just want to stop at a District title, either. They feel they have what it takes to make noise even longer than that.

It’s quite a contrast from just a few years ago, but it’s also made some of the older members of the team appreciate the prosperity they are now enjoying.

“It’s a phenomenal feeling to go from being on that team where we didn’t play very well and we didn’t have very much talent on our team — we worked hard but we didn’t have much talent — to progressing to being a senior and a leader on this team where we have the potential to go very far,” said Hauger. “It’s just a really cool feeling to see the evolution of the Boyne City soccer program.”


PHOTOS: (Top) Boyne City's Jaelyn Jarema (4) works to maintain possession against Grayling this spring. (Middle) Inanna Hauger (7) finds an opening to move the ball ahead against Kalkaska. (Photos by Sports in Motion.)