Three decades ago, girls soccer was just getting started in Michigan. But growth came quickly: In 1987, after four seasons awarding one "open class" champion, Salem and Saginaw Eisenhower became the first multiple winners to emerge from an expanded two-class tournament. 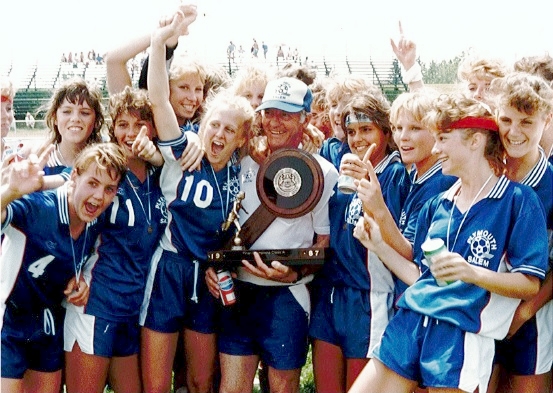 Salem, which since has finished runner-up in 1995, won the Class A championship 2-1 over Livonia Churchill. Churchill had won the last "open class" championship the year before and also fell 2-1, in overtime, in 1988 to Canton.

Eisenhower, which had finished runner-up in the first MHSAA Final in 1983, beat Plainwell 3-2 in the first Class B championship game. The title was among final crowning achievements for Eisenhower, which closed after the 1987-88 school year and joined with the also-closing Saginaw MacArthur to form Saginaw Heritage the following fall.

Plainwell also would fall in the 1988 Class B Final, 4-1 to Madison Heights Bishop Foley, but won the Division 2 title in 2011 and finished runner-up in 2012. Heritage won the Division 1 championship in 2002.

The MHSAA split girls soccer from two classes into three divisions in 1998 and then moved to the current four-division format in 2000.

PHOTOS: (Top) Saginaw Eisenhower players celebrate after their 3-2 win over Plainwell in the 1987 Class B Final. (Middle) Salem players surround coach Ken Johnson and their newly-earned Class A title trophy after winning 2-1 over Livonia Churchill.