WILLIAMSTON – Grand Rapids Forest Hills Central girls soccer coach Jeremy Stacy technically had an MHSAA championship on his coaching resume before Saturday, but he wasn’t there that day to experience it.

In his first year leading the Rangers’ program back in 2008, Stacy got married on the same day they won the Division 2 title.

On Saturday though, no wedding vows or cake cutting prevented him from experiencing what it was like to win the ultimate prize.

Adding to the title for Stacy was that the victory came on his wife’s birthday, three days after his wedding anniversary and a day before he planned on celebrating Father’s Day with his four children.

“It feels really good,” Stacy said. “It was cool to see the atmosphere here. Regardless of the result, it is fun to be in a state final. But it is much cooler to be on the winning end, that’s for sure.”

The championship also capped off a season where Forest Hills Central had to carry the target of being the state’s No. 1-ranked team for a majority of it.

“It was kind of a struggle sometimes,” Stacy said. “We had so much pressure that we weren’t having as much fun as we needed to have to get better. We had a little talk about that midseason. We had more fun and got better in the process.”

After a first half that featured few scoring chances, Forest Hills Central opened the scoring 10 minutes into the second on a goal by Korhorn, who has signed to continue her career at University of Cincinnati. 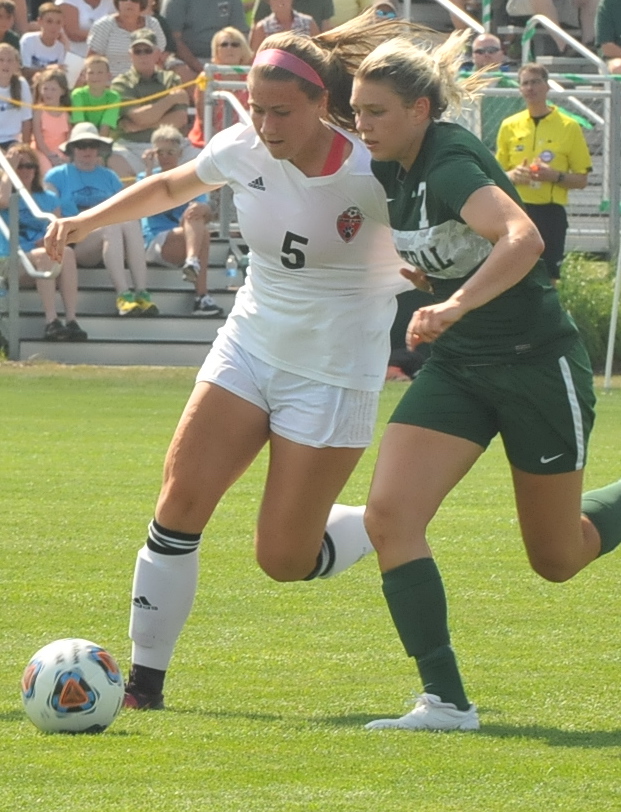 Korhorn got the ball at the top of the box, turned and fired a laser into the left corner of the net to make it 1-0 Rangers.

“I took a touch and shot it top-left,” Korhorn said. “As soon as I saw it hit the back of the net, it was unreal. It was the best feeling of my life.

“What a great four years I’ve had here at Central. I’ll miss it so much.”

Forest Hills Central (21-0-4) then added an insurance goal with 5:48 remaining when Ward headed in a chance in front of the goal after a prior opportunity hit the crossbar.

“It was a great game and great opponent,” Grand Blanc coach Greg Kehler said. “They finished their chances, and we didn’t. It’s not like we didn’t have good opportunities. Hats off to them.”

Grand Blanc was attempting to win its first MHSAA title following losses in the 2015 and 2004 title games, and saw its season end with a 22-3-4 record.

“I’m the Bud Grant and Marv Levy of high school soccer,” Kehler joked, referring to former NFL coaches who lost a combined eight Super Bowls. “They lost four and I’ve lost (three). But it’s a battle to get here, and we’ll keep battling to get back. It will turn over one day.”