By Dan Stickradt
Second Half editor

The Hornets put together one of the most impressive seasons in Class A/Division 1 history, cultivated by a 4-0 blanking of Grand Blanc in the Division 1 Final on Saturday at Michigan State University’s DeMartin Stadium.

Saline finished this spring with a brilliant 0.16 goals-against-average over 25 games with 22 shutouts, the most in Class A/Division 1 history and third-most overall on the MHSAA record list. Hudsonville Unity Christian’s 24 shutouts in 27 games during 2011 is the all-time best.

“Our chemistry is amazing,” said Saline senior goalkeeper Sophia Sweier, a second-team all-state keeper last season and one of Michigan’s top net minders this season. “A lot of us have been playing together for years with (club and high school) and that makes a difference. We are so close.”

The championship was Saline’s first in girls soccer.

“I think it was really at the end of last season when we thought that this could be a special season for us,” said Saline coach Dana Restrick, whose team broke several team and individual school records this spring. “Last year we lost to a nearly-unbeatable team in Northville (in the Regional Final). We played really well in that loss. We had a lot of players coming back this season, and I think that we really got a taste of what it takes to get to that next level.

“A lot of my seniors have played together since they were 7 or something,” continued Restrick. “The chemistry is definitely there. We coach them very specifically on what to do at all times. These girls are so coachable. They take everything that we say and do what we coach them to do in different scenarios. This is something that we have been building for the last couple of years. That we came together and played as a team is what helped us achieve the goal of being state champions.” 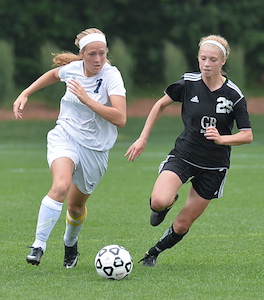 Unbeaten Saline, which finished the campaign 22-0-3 and entered the postseason ranked sixth, opened the scoring with 32:41 left in the first half. Senior Danielle Rathfon’s shot rang off the crossbar and goal post and senior Molly O’Sullivan was there to pounce on the rebound from close range.

The Hornets, making their first-ever appearance in an MHSAA Final, pushed the advantage to 2-0 with 30:18 still left in the opening half when junior Allison Luurtsema’s long shot from near the touch line sailed above traffic and deflected off the fingertips of Grand Blanc goalkeeper Amy Puidokas and into the far corner of the goal.

Saline, which outshot Grand Blanc 8-5 over the first 40 minutes, cashed in again with 23:22 remaining in the first half when senior Taylor Mulder redirected a cross from senior Amanda Zylsra and tucked the ball home from three yards out.

Grand Blanc put plenty of pressure on Saline’s bend-but-don’t-break defense in the second half, posting a 6-4 shots edge. But to no avail.

Saline capped the scoring late in the contest when Mulder scored her 43rd goal of the season, a single-season school record, with 1:28 remaining in the contest.

Saline closed its run with nine straight shutouts, including seven during the postseason. The last team to score on the Hornets was Ann Arbor Skyline (in a 5-1 win) in the third-to-last game of the regular season. Saline also gave up a goal to Skyline in mid-April and two goals to Brighton in early April.

“To go down 2-0 was tough. I think the third goal was what really broke our back,” conceded veteran Grand Blanc coach Greg Kehler. “That team gave up only four goals all season, so that was a tough wall to climb. I thought we could put pressure on them and possibly score. But they are a great defensive team. Dana Restrick’s team is great — they are as good as advertised. They are very good in the back, very organized, they possess well and they have a lot of players who can finish.

“Saline defines the principals of defending,” noted Kehler. “They got it all. If they weren’t pressuring the ball, they had someone nearby, a cover defender back there to balance the field for them. That’s an experienced team, very well coached. They are very good. No shame losing to that team.”

The Hornets outscored the opposition 104-4 this season, and the four goals against is tied for third fewest allowed in a single season in MHSAA history. Record-holder Livonia Stevenson gave up one goal during the 1997 campaign en route to the Class A championship.

Saline outshot Grand Blanc 12-10 and was opportunistic by finishing four of the six shots on target.

“Annie Walker is an amazing player, and we knew we had to keep someone near her at all times,” Restrick said. “She’s extremely dangerous. And I think that goes back to our defense, always covering for one another. We always make sure that we don’t give the opposing team much space. And it’s not like we outshot them by much. We were fortunate enough to be able to finish (our chances). We have a lot of girls that can score.”