MHSAA champion swimmer Evelyn VanDeMark of Alma is back to training normally in the swimming pool after surgery and treatment for a rare form of cancer found in the joints of the arm, neck or leg called synovial sarcoma that was discovered in February.

“It’s really exciting to be able to do what I love to do,” said VanDeMark, now a senior, who won the Lower Peninsula Division 3 Finals 500-yard freestyle and also earned all-state with a seventh-place finish in the 100 butterfly last November.

“This has been a crazy year. It’s been polar opposites. Both great and awful things have happened to me.”

VanDeMark says she has learned a lot.

“The biggest thing I have learned is how amazing people are,” she said. “When you go through something like this, it gives you a good faith that people will be there for you.”

That’s what VanDeMark felt when Alma High School students wrote letters to her in April when she was starting chemotherapy treatments at University of Michigan Hospital in Ann Arbor.

“Not gonna lie, I totally cried when I got all of the letters everyone sent,” she tweeted on April 25. “I can’t describe how thankful I am for the support. Y’all rock.”

“It was really amazing,” she said. “You never know how much people care about you until something like this happens.

“I had other people reaching out to me that I hadn’t talked to in six years. They just wanted to say I really miss you, and I’m really sorry this happened to you. It was really cool to feel that support when I needed it.”

VanDeMark had been one of the softball team’s top players as a sophomore the year before and attended a few softball games last spring, but she missed out on the Panthers’ District and Regional championships and competing in a Quarterfinal game at U-M.

“Obviously I was excited for them, but it was hard to be watching and not playing – especially for such a big year,” she said. “They did so well, and I wish I could have been a part of it. But overall I’m really excited they did so well, and I’m excited to play with them next year because I think we can be a lot better.”

The first round of chemotherapy, VanDeMark said, she “didn’t do very well.”

“But they switched up the anti-nausea medication, and I actually did a lot better after that,” she added. “I was still pretty worn out, and I needed to take naps every once in a while. But I wasn’t as bedridden.”

She was able to attend a May 21 benefit event held to raise money for her treatment.

“That was cool that I was actually able to go for a little while on that Saturday after the treatment ended that Thursday,” she said.

VanDeMark began doing some swimming in the spring.

“I had to miss a week of school every three weeks,” she said. “So I had a lot of homework to catch up on. But whenever I was not doing that, I was in practice.”

After each chemotherapy treatment, she had to take a couple of days to recuperate.

“But normally by the following Monday, I was back in the pool even if it wasn’t for full practices,” she said. “I started with one set, and added a set every day. Now I’m swimming two-a-day practices in my normal lane.”

“The plan at first was to do 4-6, but they stopped me at five because everything looked pretty good at that point,” she said. “My doctor said it would be OK to move on to radiation.” 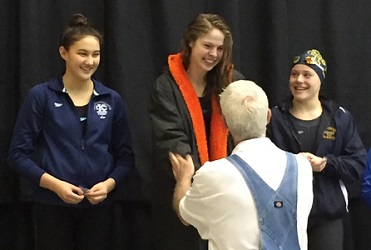 She tweeted July 18 that she was “so excited to wake up and go to swim tomorrow instead of chemo.”

“I tweeted that because that would have been the day I went back for round six of chemo,” said VanDeMark, who then started radiation July 25. “Compared to chemo, it’s a piece of cake.”

She has radiation sessions five times per week for five weeks through the end of August at St. Mary’s of Michigan Medical Center in Saginaw.

Meanwhile, her strength is returning in the pool.

“It has definitely gotten better,” she said. “I’m still a little bit slower than the boys at this point, but I’m catching up. I’m doing the same workouts I would have been doing if nothing had ever happened, and it feels really good.

“It’s exciting to be able to do something you were able to do before. It makes me feel like I overcame something.”

Yet VanDeMark feels she is “kind of out of shape.”

“I feel like I would have felt starting in May normally,” she said. “It is a little bit weird feeling like this in August when the season is about to start. I really think I can get back to where I was, although just swimming at all is going to be pretty awesome because I wasn’t sure at the beginning of all this what I was going to be able to do or how long treatment would last.”

“I think I’ll go back to states for sure,” she said. “I don’t know if I will score as high although I certainly hope so. I want to get better, and be better than I was last year. After all, if you’re not working to improve, what are you working for? But I don’t have whole lot of expectations at this point.”

She asked Alma’s swimming coach since 1980, Jeff Huxley, for advice on how to get back to where she was last season.

“He looked at me and said, ‘Well you know, I guess we’re in uncharted territory right now, aren’t we?’” she said. “Our plan is just to do what I think I can do, and he told me to let him know what I think because he has no idea what I feel like at this point, and how could he? But we’ll figure something out.”

“She’s kind of the reason I started swimming,” Evelyn said. “I was the little sister who followed her around and did what she was doing. We swam together for a long time. It helps, because she was really good.

“She’s on the record board for multiple events. Sometimes it’s really helpful to look up at the record board, see the ‘L. VanDeMark’ and think I want to be as good as she was. It’s good motivation for sure.”

Lillian and Evelyn’s 25-year-old sister, Grace, has been helpful during her illness this year.

“We’re all really close,” Evelyn said. “Sometimes it’s not even what they do. It’s just having them be there talking to me. They’re both very strong people. I look up to them, and it’s helpful to have strong people around you when you’re going through something like this.”

Evelyn has adjusted to not having hair.

“It was tough at first,” she said. “When it was falling out, I got a little bit emotional. When we went to shave it off, it was scary. But once I did it, I looked healthier without hair than I did with patchy short hair. That didn’t look good, and it was just easier to get rid of it.

“People still stare at me. That doesn’t really bother me. I’m pretty used to it.”

An experience in Saginaw on July 27 was memorable.

“I was at radiation, I walked in the door, and there was this old lady smiling at me,” Evelyn said. “She said, ‘Can I give you a hug?’ I said, ‘Of course you can.’

“Her husband said that she was worried about losing her hair, because she had just finished radiation and was going to chemo. It was kind of cool, because I got to tell her to not worry about it. She looked at me and said, ‘Yeah, you look so cute.’ I said thank you.

“It was just an amazing feeling, because I knew I never would have gotten that hug if I had hair. That to me is worth so much more than having hair.”

Evelyn expects her hair to start growing back soon.

“But since I’m in the pool, it breaks off a little bit,” she said. “So I think it will take longer than they expect it to.”

She’s excited to see if new hair will come in darker or curly, as has been the case with some who have battled cancer.

Meanwhile, she needs no bathing cap and is more aerodynamic as she swims in the water.

“I talked to my coach and said, ‘You know, I might just shave it again because that would be so intimidating at state to see a bald girl walk up,’” Evelyn said. “They would probably think, ‘She shaved her head! She’s serious about this!’”

VanDeMark tweeted, “It’s an amazing feeling when your someday becomes your today” after earning the MHSAA title at Eastern Michigan University’s pool in Ypsilanti last Nov. 21.

She has since found out that she swam that day with the cancer already progressing.

“It had been an ongoing thing,” Huxley said. “We assumed it was just a bruise or some kind of trauma from playing softball. It might have been around for a long time.

“She’s a trooper,” Huxley added. “She’s been anxious to get back in the water. I don’t know how things are going to play out, but I’m happy she’s healthy. She’s doing the absolute best that I think a human can handle under the circumstances. She’s a battler.”