MARQUETTE – Sometimes just one event can make the difference between a happy experience and a devastating one.

And that’s what happened at the girls Upper Peninsula Swimming & Diving Finals on Saturday.

Heading into the final event, Houghton led Marquette by just one point, and a tension-filled atmosphere filled the pool deck at Marquette Senior High School. Gremlins head coach Erik Johnson had an intense look on his face as he wondered if his team would grasp its first championship since 2014.

In the end, Johnson ended up pumping his fist in excitement and hugging his assistants as the Gremlins won the 400-yard freestyle relay and the team title, finishing ahead of the Redettes.

“We knew we had to do well in that last race to finish in front of Marquette and the girls took care of business,” Johnson said. “That relay has been a point of emphasis for us all year and to finish it off is something special.”

“There were a lot of emotions coming out and I don’t have much of a voice left, but this is a great feeling.”

Marquette head coach Nathan McFarren said it came down to depth, and that Houghton just had a little more of it this year.

“We had some pretty outstanding swims today,” he said. “I told the girls that we aren’t going to get second place every year, and that we’ll continue to grow. I think we knocked it out of the park today on both the boys and girls side, but I have to give credit to Erik though. They just gave us more than we could handle.” 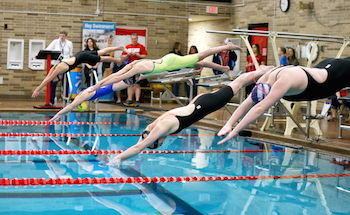 The Redettes won the other two relays, the 200 medley and the 200 free. They also had two individual champions as Taryn Aho won both the 200 individual medley and the 500 free, while Jayme Winn took first in the 100 freestyle.

Gladstone, who won the meet last year, took third this year with 224 points, while Rudyard took fourth with 146. The Braves won one event as Sydney Herioux finished first in the 100 breaststroke, while Rudyard won two. Trista MacDowell took first in both the 50 free and 100 backstroke.

Braves head coach Tom Desy said his team lacked the depth of last year’s championship squad, but he was pleased with how his team performed.

“I thought the girls did pretty well,” he said. “We had some sickness come through our team the last couple of weeks, but the ones who were able to show up have done a great job. They had some self-doubt coming in, but they did well and I’m proud of them. We were just a little shorthanded.”

Westwood ended up in ninth place, but the Patriots did have one individual champion as Bethany Laasko won the 1-meter diving competition Friday night.