Dexter junior Annette Schultz sees it the other way.

“I like to think being happy leads to success,” said Schultz, the reigning MHSAA Lower Peninsula Division 2 Finals champion in two events heading into this weekend's meet at Eastern Michigan University. “Success isn't what leads to being happy; you have to be happy in order to get there.”

It can be assumed that Schultz has led a very happy life during her 16 years. As a sophomore, Schultz led Dexter to the Division 2 team championship by winning the 100 and 200-yard freestyle races and swimming a leg on the 200 medley relay, but it seems her success does not define her.

Schultz has an outgoing personality. She has not let success go to her head, and she reaches out to others despite her status as an elite swimmer.

“She's always talking with someone new before a race, or talking with the officials or the timers,” said Dave Gendernalik, who has coached her since she was 6 on the Dexter Community Aquatics Club (DCAC) and assists coaching the Dreadnaughts. “That is something I learned as a coach. I stress to be focused and be ready, but that is how she gets herself ready for a race and takes the stress out of it.


Getting in the swim

Two years later, with that hurdle cleared, Schultz had a different attitude about the sport.

“When I started setting some records, I was like, 'Oh, I'm not too bad at this. I should keep going,'” she said.

At that point, Dexter High School coach Cory Bergen knew he had a budding star in the school.

“I saw her grow up in the age-group program and couldn't wait to get her in the high school program, obviously,” he said. “She started breaking the age-group records of some of our top All-American high school kids when she was in 8 and under, so I kept an eye on her for sure.”

Schultz made an immediate impact as a freshman. She swam on the 200 medley relay team that included her older sister Gretchen and finished third at the MHSAA Final. She also was third in the 200 freestyle and fourth in the 100 freestyle in that meet as a freshman.

“I wasn't expecting to drop as much time in the finals, so that was really cool to see on the boards,” Schultz said of her effort in the 200. “My body just hurt so badly, and it's a great feeling to know that I put everything into a race.”

The 200 freestyle was the second event of the meet. The 200 medley relay was the first, so in a matter of 10 to 15 minutes, Schultz had to swim in both events. A challenge? Sure. But again, Schultz had a little different – and more positive - spin.

The 200 medley relay again featured her sister Gretchen, who was a senior a year ago and gave the siblings a chance to share an event title.

“She has been such a huge influence on me,” Annette Schultz said. “She went on to swim at MSU (Michigan State), so it’s cool to see her swim in college at a Division I school.”


When it comes time to practice, Schultz sets a perfect example.

“Most of what we do is practice swimming,” Bergen said. “We practice an awful lot, and she is the top kid in the pool driving the practice. 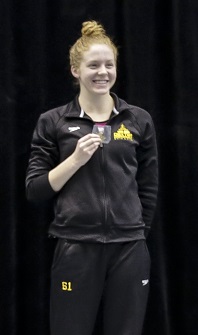 “When you have somebody that dedicated but yet having so much fun and is so team-orientated – she loves her teammates and includes them in everything – it sets an example for everyone else. It can be an individual sport thinking about yourself, but she is very driven in what she wants to succeed and includes everybody.”

It is part of why she has been so successful. After being happy, of course.

“She's a technician,” Bergen said. “I've had her swim backstroke in the medley relay the last few years, and she broke the school record.

“She also is very strong. She has done 18 pull-ups, and that's strong. We had six girls do double digits, and she was far and away tops in that.”

What Bergen has noticed in high school, Gendernalik has seen on the age-group team.

“She is a great teammate and a great listener, and I use her as an example for the other kids,” he said. “We take attendance for the club team, and she's always at the top of the list.

“We sometimes do meets with kids on the younger team, and they love her and look up to her. That's the great thing about her. She will do what you ask her to do, and that is a great example for the other kids.”

Schultz recognizes her strengths and weaknesses, and faces the weaknesses with a realistic approach.

“My biggest thing I'm working on right now is my turns because they're not as fast as they could be,” she said. “But I'm very determined to get to the wall. I do a lot of pulling and kicking.”

Gendernalik said he has spent more time working with her on the psychological side than the technical side.

“She has the physical tools, so  knowing that you're good and then going to bigger meets, that can weigh on your mind when you are swimming against college kids and you are 16 years old,” he said. “So I've worked more with her on the psychological part. We've done a lot of work with that in the last year.”

At her age, Schultz is the complete package.

“She's very driven and very passionate about the sport,” Bergen said  “She has a joy about it. She loves it. She loves the hard work. I keep throwing more and more at her, and she takes it with a smile, which, as a coach, is a dream.”


Obviously, colleges have taken notice, but as a junior, Schultz has so much left before taking the next step. However, with the DCAC, she competes against some college swimmers and has not been overmatched.

“This summer, she swam against some of the better kids from Ohio State and Michigan, and she placed in the top eight in some of the events swimming against college kids,” Gendernalik said.

Those top-eights have come in the backstroke, something she swims only on a medley relay in high school. She said her favorite races are the 100 and 200 backstrokes, 50, 100 and 200 freestyles and the butterfly.

“I love the 100 backstroke; it is one of my favorite strokes,” she said. “My 200 free has a better time than my 100 free. The 100 is like a different feeling, it's such a short event you have to turn the jets on the second you hit the water, but the 200 free I do a little bit more pacing in that one.

“It's just a different feeling.”

At the MHSAA Final last year, Schultz's potential shined the brightest in the 200 freestyle, where her time nearly matched the pool-record time of 1.47.54 set by future Olympian Allison Schmitt in 2006.

“She should be able to make the qualifying times when she is in college, and the next time around, I expect her to be at the Olympic Trials,” Gendernalik said. 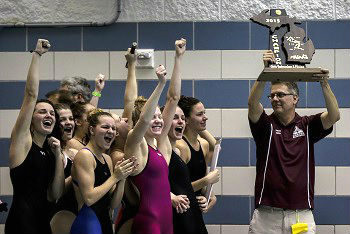 While Schultz isn't looking that far ahead, she conceded it is something she has thought about.

“It is a dream of mine to go to the Olympics, of course, but right now I'm just focusing on what I can do now and get some of my cut times for USA swimming, which do transfer into Olympic Trial times,” she said, “and I'm hoping to get those soon.”

Schultz said she does as many different strokes as she can during practice, although she is not fond of tackling the breaststroke.

“I definitely practice as many strokes as I can, even the breaststroke, but I don't like that one,” Schultz said. “It's definitely harder, and I've never had a connected stroke for breaststroke and I've always struggled with it, so I never developed a love for it.”


Obstacles in the pool


The road to success has not been without obstacles. Schultz has been diagnosed with scoliosis, and it became bothersome in her freshman year.

“I knew I had it, but they found out to which degree, and that was playing a role as I was having problems with my shoulder,” she said. “I have to strengthen certain parts of my body, and that helped out with swimming because they found out I was using certain muscles in replacement for other ones.

“I try to swim a lot of backstroke at practice because of it. The backstroke helps stretch out my shoulder for freestyle, and that definitely helped out a lot. I do some PT (physical therapy) exercises at the beginning of swim season to be sure those muscles are strengthened around my spine and shoulders so that I won't get injured.”

For now, Schultz is focused on this weekend's meet, and then the age-group team before she embarks on her senior season next year. Despite all of her success, she is far from satisfied.

“This year, I would like to break some state records,” she said. “That's on my plate of things to do. Other than that, I just want to keep improving.”

And, of course, be happy, because if she's happy, she believes she will be successful.

“It's like a balance. It's nice. I definitely love what I'm doing.”

PHOTOS: (Top) Dexter’s Annette Schultz stretches her lead in the 200 freestyle at last year’s Division 2 Finals. (Middle) Schultz holds up her medal while standing surrounded by other placers on top of the awards podium. (Below) Schultz, third swimmer from right, cheers as Dexter coach Cory Bergen hoists the team trophy last season. (Click to see more from HighSchoolSportsScene.com.)