Claire Newman described her younger self as “a complete amphibian,” and not much has changed as she goes through her teenage years.

“I’ve just always felt at home in the water,” the Midland Dow junior said. “It helps me work out my school day and any emotional problems. Being in swim also kind of reminds me of my abilities and, personally, I feel more spiritually sound when I swim.”

Newman is a four-time Division 2 Finals runner-up, having placed second in the 50 and 100-yard freestyles both of the past two seasons. She has won state titles in club competition, and is already drawing interest from college swim programs at all levels.

So it’s no surprise she feels comfortable in the water. It’s an offseason spent mostly on dry land, however, that could be the catalyst for Newman’s strongest season yet.

“I spent two to three months doing physical therapy on my shoulder,” Newman said. “I feel much better now that my shoulder is all healed up. I know better how to prevent another injury. I’m already starting to see the results of it. I’m much more conscious of which muscles I’m using for every part of my stroke, but especially my shoulders.”

The shoulder injury surfaced during Newman’s sophomore season, and she said it was the result of overuse. While still in season, she trained by simply kicking in the pool for two weeks.

Newman managed to perform well when it mattered at the Division 2 meet, also helping Dow touch third in the 400-yard freestyle relay in addition to her runner-up individual finishes. But she said the entire process was tough emotionally.

She would go on to compete in Junior Nationals in Tennessee following the prep season, but eventually focused on getting healthy.

“She was working very hard on the dry-land aspect, then she started swimming again full-time in May and swam through the summer,” Dow coach Chilly Smith said. “She did very little swimming in January through April. It’s going to help her, hopefully, stay healthy. By doing all the dry land, she stabilized (her shoulder). That was probably the first time she’s ever had really four months out of the pool since she was younger -- a lot younger. I think it was good for her, and that’s why we brought her back fairly slow.”

Now healthy, Newman is ready to meet the goals she’s set for herself. While they’re lofty, they look to be well within her reach. 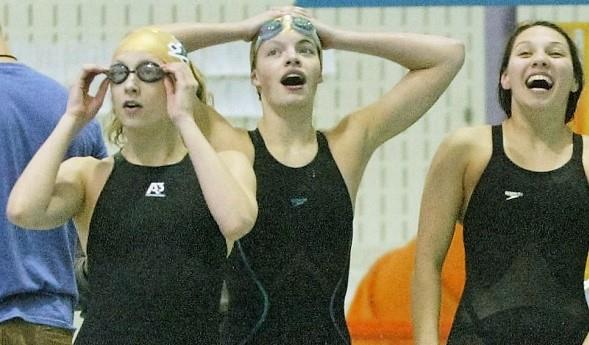 “I think winning an event at state is probably one of my goals,” she said. “Breaking 23 (seconds) officially in the 50 -- I’ve sort of, kind of done it unofficially. I want personal improvement in my other strokes, specifically the breaststroke and the butterfly, and I also want to get more college exposure.”

Based on last year’s results, Newman appears to be the favorite to complete her first goal – something she was on track to do a year ago.

In 2016, Newman finished second to Birmingham Seaholm’s Haley Doan in the 50 and Dexter’s Annette Schultz in the 100. She passed both of them in 2017, but East Grand Rapids’ move to Division 2 (from Division 3) brought into her races Ileah Doctor, who went on to set meet records in both events in finishing ahead of Newman. Doctor graduated this spring and will be swimming at Indiana University, but Newman’s motivation remains the same.

“I was aware of how incredibly fast she was,” Newman said. “I didn’t really focus on her as competition, though. I usually use myself as competition, trying to beat my own times and focus more on improving myself.

Winning an MHSAA Finals title, and breaking 23 seconds, would go a long way toward achieving Newman’s final goal of attracting more college attention. So would improving her other strokes and proving she can win at longer distances, as Newman is well aware.

“A lot of colleges really like to see a 200 (yard) swimmer,” Newman said. “That signals that you’re pretty flexible in your events, same with the two (individual medley events). I think it’s also really great for aerobic training.”

Smith said he’ll be working the longer events, as well as the butterfly, into Newman’s competitive schedule this season to help her and the team.

“A swimmer has to be able to swim different events, because that’s one way you can keep a swimmer from becoming stale or bored with their swimming,” he said. “We’re really trying to work the 200, because if we can get a better 200 out of her, that’s just going to help her 100 freestyle.”

Newman has taken a visit to Michigan State University and said that Notre Dame (which she has visited on her own) and Indiana also interest her significantly, as does Division III Kenyon College in Ohio. While she admits she wants to swim against Division I competition, the most important factor for Newman is finding the right academic fit, as well as an athletic one. She plans to study something in liberal arts that allows her to tap into her creative side.

No matter where she goes, as long as she’s in the water, she’ll be right at home.