YPSILANTI – The look on the faces of Farmington Hills Mercy’s 200-yard medley relay team pretty much said it all.

And what was not said with facial expressions was very clearly communicated by the Marlins’ coaches as the opening race ended.

The reigning Division 1 champions needed to pick it up.

Unlike years past, this version wasn’t top heavy with individual event favorites. But it was extremely deep.

And on Saturday, the Marlins used that depth to best the field, rallying past Brighton on the last leg of the 400 freestyle relay to break a tie with the Bulldogs and capture their second consecutive Lower Peninsula Division 1 championship at the Jones Natatorium on the campus of Eastern Michigan University.

“These are the kinds of moments you live for,” said Mercy coach Michael Venos, whose team shared first place with Brighton entering the final event of the meet. “Every little kid, in their backyard, is trying to make that last-second shot. And every swimmer grows up wanting to anchor that relay, or have the meet come down to the last relay. And these girls got to live that out today.”

Mercy was seeded fourth entering the race, with Brighton coming in as the seventh seed. But the Bulldogs got off to a good start thanks to a 51.26 opening leg by senior Chloe Reed. The Marlins kept their poise, and cut into that lead with strong second and third legs by senior Courtney Connolly and junior Julia Coffman. That set the stage for a little “backyard” magic by sophomore anchor Greta Gidley, who swam a 50.26 – the third-fastest leg of any competitor in the race – to help her team to a third-place finish and enough points to beat the Bulldogs, 211 to 209.

“I was trying to focus on my own race, stay in my own lane,” said Gidley, who rallied from more than two seconds back to help her team top Brighton. “I couldn’t see Brighton, so I had no idea where they were, but I could see the girl next to me from Saline, and I was catching up to her, so I just put my head down and finished as strong as I could.”

Everyone outside of the pool knew exactly what was happening, and the entire contingent from Mercy erupted in celebration when the times shot up on the big scoreboard.

The Marlins had struggled out of the gate, but slowly but surely crept closer and closer to the leaders. They scored 34 points in the 500 freestyle, as senior Annette Domkowski (13 points), junior Kylie Goit (12) and junior Lindsey Case (9) all finished top-nine to vault their team past Rockford with just four events left.

“We talk all the time that it’s never about winning,” said Venos, whose team did not finish top-3 in any individual event, let alone take an event victory. “It’s about being the best, and if they come here and they focus on what they need to do to go fast, they’re going to walk out successful.”

Brighton didn’t win an event either, with its highest finish a second in the 200 freestyle relay. Seniors Maddie Mince, Julianne Libler and Reed, along with freshman Drue Thielking, finished second to Harrison-Farmington. Bulldogs coach Jason Black said though it was a little disappointing to finish a close second at the Finals, he couldn’t be happier with his team’s performance.

“They fought, all day,” Black said. “All three relays earned all-state honors. Looks like we have a couple all-American consideration times. I’m happy, I really am.” 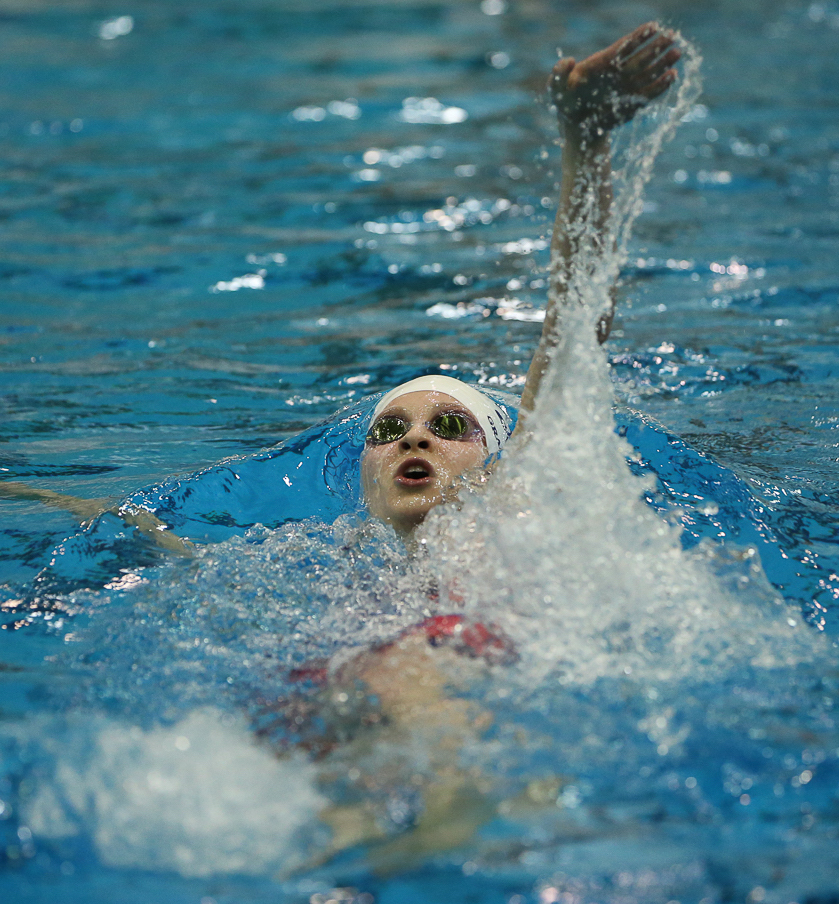 Another program making a little history – or at least matching it – was Harrison-Farmington. The Thunderbirds finished third overall with 199 points. They finished third a year ago, but a distant third. Coach Kyle Kinyon’s team won both the 200- and 400-yard freestyle relays, and senior Ashley Turak capped off a stellar career winning both the 50- and 100-yard freestyle events, both in record-setting fashion. She won the 50-yard race in a time of 22.20, breaking her own meet record, set in Friday’s preliminary round. Her time of 48.72 in the 100-yard final smashed her own meet record as well, also set Friday at 49.18.

She teamed up with junior Lia Munson, senior Emma Inch and sophomore Madeline Greaves to win the 200-yard freestyle relay in a time of 1:33.34 – also a Division 1 meet record. The same foursome set an all-class/division Finals record in the 400 freestyle relay. Needless to say, Turak was more than pleased with how the day unfolded.

“Last year we went into the state meet and didn’t have high expectations,” said Turak, who earned the meet’s “swimmer of the year” honor for the second straight from the state coaches association. “This year I was going into this meet with a different mindset. I was going for a 21 (in the 50 freestyle), so after that race I wasn’t all that happy. But after each swim I raced, I got happier and happier. That 48 in the 100 free, that was one of my goals.”

“I put in a lot of work this year, so I came in wanting to defend my (200 IM) title and be somewhere around my state record time,” Ackerman said. “That’s what I did today, so I’m real happy about it.”

Grand Ledge junior Lola Mull repeated in the 500-yard freestyle, falling just short of her own meet record time in the process. She swam 4:44.93, less than a half-second slower than she did at last year’s Finals. She was less than two tenths of a second off the pool record.

“My goal was to swim under 4:40,” Mull said. “I had my splits on my wall, looking at them every night. I was ready to break it. But I didn’t have a full taper heading into this meet. So I thought I would save it for junior nationals, but if I could do it today, I was going to go for it.”

Mull finished second in the 200 freestyle to Saline’s Maddie Luther, who won in a time of 1:49.14. The Hornets finished fifth as a team, with 186 points.

Rockford, which won the 200 medley relay behind the efforts of sophomore Sara Kraus, junior Masy Folcik, Morgan Kraus and freshman Ashley Lund, was fourth with 191 points.