In the end, the winner was decided by less than a point.

“I’m getting too old for this,” Mercy coach Mike Venos joked. “But I’m never going to complain about a state championship and these girls held it together mentally, which is something we’ve been working on with this senior group for four years. Just learning to control the things in their control, and that’s coming in here swimming fast and diving well.

“Pioneer swam fantastic today, and if it would’ve been a tie for both of us that would’ve been great because honestly, they deserve it as much as we do.”

Top-ranked Pioneer was seeking its first team championship since a string of nine in a row ended in 2008. 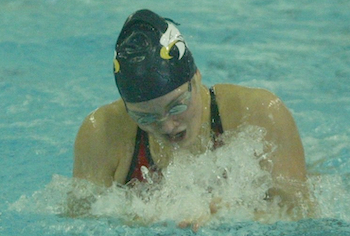 Mercy junior Greta Gidley won the team’s lone individual championship. She raced to victory in the 100 free in a time of 50.53 seconds and bested Ann Arbor Pioneer’s Lucy Mehraban (50.86) by the slimmest of margins.

“I woke up this morning at 6 a.m. because I couldn’t go back to sleep, and all I could think about was this is a dream team and I will never be on a team as great as this one,” Gidley said. “The whole time, there was never a doubt in my mind that we could not do it, that we couldn’t win it again.

“This team is closer than it’s ever been before, and I think that has helped. We’re all best friends, and we train together and dive together. That just makes it that much better.”

The Marlins won last year’s Final by 11 points over Harrison-Farmington.

“I thought last year was close, and this was even closer now,” senior Julia Coffman said. “I couldn’t imagine doing this with any other people, and it’s like a dream. This is the most incredible group I’ve ever been around, and I’m savoring this moment.

“We train with Pioneer, and we are close with them and they put their hearts into it. They are a great team, but today we were just a little better.”

Hudsonville senior Claire Tuttle pulled off the three-peat in the 100 breaststroke and nearly set a new meet record in the race. Tuttle clocked a time of 1:00.79, nearly besting Miranda Tucker, who swam a 1:00.56 in 2014.

“My expectations were to just do the best I could and support my team,” Tuttle said. “I really wanted to go for Miranda Tucker’s state record, but she’s also insanely fast and it’s an honor to be that close to her.

“I didn’t expect to do as well as I did in the 50 free, but that was insane, and I just feel beyond blessed that I’ve been able to be a part of such a supportive team and to make these friendships that have lasted throughout high school and have gotten me through so much. It’s sad to see it all go, but I’m excited for the new beginning (at the University of Michigan ).”

Grand Haven senior Kathryn Ackerman ended her high school career in style by capturing a pair of individual titles to finish with five at the Finals. 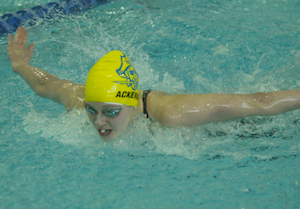 She also helped her team finish runner-up in the 400 free relay.

“I was pretty happy with all my swims,” Ackerman said. “It was a little bittersweet to go into my last meet, so there were a lot of emotions. I was just hoping to go out there and have fun and get close to my best times, and I was. It was fun to have that comeback at the end and have that be my last swim as a Buccaneer.”

Ann Arbor Huron junior diver Annie Costello avenged her runner-up finish at last year’s Final and put forth a dominating effort with a winning score of 424.40.

PHOTOS: (Top) Farmington Hills Mercy cheers on its 400 freestyle relay, which finished third to give the team a ½-point overall championship win. (Middle) Hudsonville’s Claire Tuttle swims to her third-straight 100 breaststroke championship. (Below) Grand Haven’s Kathryn Ackerman swims to her third-straight title in the 200 IM. (Click for more from HighSchoolSportsScene.com.)