The Fenton High School swimming pool isn’t named after Gracie Olsen. The program’s record board only makes it look that way.

Olsen, a junior, owns seven of the eight individual school records at Fenton, and she has her eyes on the eighth -- the 100-yard backstroke, which was set at 57 seconds by Haley Shaw in 2012.

“That one is frustrating, just 0.24 (seconds away from breaking it),” Olsen said with a laugh. “I would say I probably swim that event the least. I didn’t really start to get into it until a couple years ago.

Olsen will likely claim that record eventually – she's already beaten the time outside of high school competition – but even without it, she’s left an indelible mark on the Fenton program in 2½ years, and that goes beyond the number of times they’ve had to print her name on the board.

A three-time MHSAA Finals champion and Indiana University commit, Olsen is among the state’s best swimmers, and a sterling example for her teammates to follow.

“Her attention to detail and her dedication has put her above most swimmers,” Fenton coach Brad Jones said. “She’s absolutely one of the most coachable athletes I’ve ever had, and this is my 32nd year coaching.”

It was cold feet – or a dislike for them – that put Olsen on a path to swimming glory. She said she was an ice skater with an eye on playing hockey, like her father, when she was young. But her feet getting cold turned her off to the idea. While she experimented with several other activities, it was her mother’s sport, swimming, that stuck. 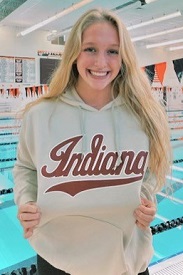 Gracie took up the sport competitively at 7. By the time she was swimming in the 10-and-under state finals, coaches could see great things ahead.

“We had this coach, his name was (Dave) Seagraves, and he always told me when I was younger, ‘I just know there is something about you – you're going to be so special,” Olsen said. “He passed away a couple years ago (in 2017). When I was 8, he was that factor that always made me stick to it. When he passed, I kind of started swimming for him.”

Seagraves’ influence on Olsen can still be seen – and not just in the pool. When she was young, he told her to tap the starting block 10 times prior to a race to help her focus. While it’s not an every-race occurrence, she said she does it often, and it frequently results in her best swims.

“I’d stand behind the blocks and tap it with my left and right hand 10 times, kind of like playing the piano,” she said. “I don’t usually forget.”

In the pool, Olsen’s greatest influence is likely her mother, Stephanie, who herself was a standout swimmer before a shoulder injury derailed a possible collegiate career. Stephanie coached the Fenton Area Swim Team with Seagraves, and is an assistant on the varsity team. She is also the one that pushed her daughter to be an all-around swimmer, rather than focusing on one stroke or a single distance.

That’s resulted in personal best times that would have been good enough to finish all-state in all eight individual events at the 2019 Finals. She can’t swim all eight, of course, so she swam in two – the 200-yard freestyle and 100-yard butterfly – and won both. She was also part of Fenton’s 400 freestyle and 200 medley relay teams, which placed third and fifth, respectively.

“We highly anticipate that she will repeat as a double winner in whatever events we put her in,” Jones said. “One of the things that makes Gracie so special is that she’s good at all the events. She doesn’t have a weak stroke. … In coaching, you don’t have athletes like Gracie very often. It’s fun to have people call you and say, ‘Where is Gracie going to be, because we don’t want our kids there.’ When the state Finals come around, we start getting calls. That’s a lot of fun.”

Jones joked that the only thing Olsen isn’t elite at is diving – although she hasn’t tried it.

Both Jones and Olsen expect she will start to specialize a bit more when she goes to Indiana, and that butterfly will be her main stroke, along with freestyle. Her versatility gives the Hoosiers plenty of options, though.

For now, she’s focused on improving each stroke every day, and her motivation to do so goes well beyond chasing records.

“Just thinking about where I am now tends to be a huge motivation for me,” she said. “I’m very thankful, personally, for what I have. It just makes me so happy that I get to be with a team like this and have the coaches that I do. I could not be more fortunate.”