Seaman already will graduate next spring as one of the top swimmers in Brighton history. As a sophomore two seasons ago, she became just the second from her school to win an MHSAA championship in the sport, finishing first in the 100-yard freestyle at the Lower Peninsula Division 1 Final. Last week she helped the Bulldogs make more history, as they beat reigning LP Division 2 champ Dexter for the first time in 22 years, 98-88. Seaman won the 100 freestyle (51.62) and swam on winning 200 medley (1:51.97) and 200 freestyle (1:40.46) relays to earn the Michigan National Guard “Performance of the Week.”

A top-25 student academically in a class of more than 500, Seaman carries a 4.06 grade-point average and has taken college visits to Brown and Cornell and today began a visit at Ohio State. She’s interested in studying psychology while continuing her swim career at the next level. But first she’ll be a likely favorite in at least one race at this season’s Finals, Nov. 18-19 at Oakland University, with an opportunity to add to the accolades that have led Brighton to hang a poster of her alongside one of Zebley in their pool.

Coach Jason Black said: “Taylor is the type of athlete that not only brings her ‘A’ game to the swim meets but also to each practice. She attacks each set with an intensity knowing that the workout is going to make her faster at the end of the season. Taylor has helped transform Brighton swimming from a regional player to a state player as we have been a top-10 program the last two years with our eyes on a third year in a row with Taylor leading the way. She recently broke her own school record in the 50 freestyle with a time of 23.68 and is swimming faster in the middle of the season than she ever has. Her work ethic and her drive help lead the team to ever bigger goals. It is going to be hard without Taylor next year, but her swimming has inspired the younger swimmers to be better – and I believe our team will still be reaching for higher goals after she graduates because of how Taylor has led by example.”

Performance Point: “Every year since I was a freshman, and obviously many years before that, it’s been really disappointing to lose to (Dexter),” Seaman said. “We always try our best, but it never seemed to work out, obviously. It would just ruin our week. Last week was just awesome. Jason (Black) told us we had a chance to beat them for the first time in 22 years. We were really motivated to do that. We knew they had lost a couple of good swimmers, and we knew we still had most of our state team from last year and had a few good girls come in as freshmen. I kinda cried when the score was announced at the end."

Pushing ahead: “I feel pretty good about my season at the moment. I, along with other people on the team, we’ve all been going faster right now than what we were doing last year at this time. I would obviously like to go for my best times, and if I could win (at the MHSAA Finals) again, that would be absolutely amazing. I know it will be tough competition; last year it was Katie Portz, but she graduated. I’m actually pretty good friends with her; we used to swim together in the offseason. Having great competition is good because they can push me, and especially when they are friends.” 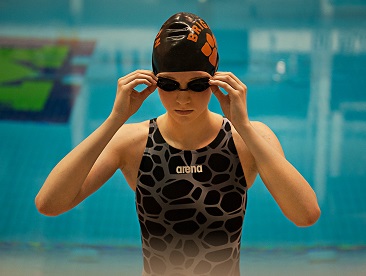 Leaving a legacy: “I just remember when I was 8, swimming for Brighton Eels, I would see the Morgan Zebley picture on the wall being like, I want to be like her. Now, seeing my poster on the wall, people ask me all the time, ‘Is that you?’ It’s cool that poster will be up there for the next many years. … It’s interesting to see every day at practice. We’ve adjusted to it being there. At first (my teammates) would be like, ‘It’s you, watching yourself swim every day.’”

Going for gold: “I really look up to all of the Olympic swimmers, and how dedicated they are. Missy Franklin, I just love her positive attitude. She didn’t do great at the Olympics this year, but she still had an amazing attitude about it. Allison Schmitt (from Canton) used to swim for my same club team, and I actually broke one of her records – so obviously I want to be like her. She’s amazing.”

Mind on the future: “I would like to do something with psychology. I’m leaning toward the sociological aspects of psychology. I find that very fascinating. I love finding out why we as people do what we do, why we act certain ways in certain situations. Why, when there are multiple doors available, we all funnel into one door. I want to learn why we do that.”

PHOTOS: (Top) Brighton's Taylor Seaman launches from the starting blocks. (Middle) Seaman will be competing this season to add to her 2014 MHSAA title. (Photos courtesy of the Seaman family.)