The Buccaneers’ standout will graduate next spring as one of the most accomplished athletes in Grand Haven history and one of the top high school swimmers in Michigan all-time. She won her fourth and fifth individual MHSAA Finals championships at Saturday’s Lower Peninsula Division 1 Finals at the Holland Aquatic Center to earn the MHSAA “Performance of the Week” – and ranks among the nation’s fastest high school swimmers in both of her events this fall.

Ackerman earned her third straight championship in the 200-yard individual medley (1:57.61) and won the backstroke (54.70) for the second-straight year. She also teamed with senior Alonna Clark and juniors Ocean Veldhouse and Mary Violet Springer on the runner-up 400 freestyle relay (3:27.92) and with Springer, Veldhouse and junior Georgia Basil on the ninth-place 200 medley relay (1:47.58). Her IM time was the second-fastest in MHSAA Finals history, from all divisions/classes, behind her record-setting time from 2018. The superiority in the IM is evidence of her impressive versatility – she holds Grand Haven records in that race but also the 200 and 500 freestyles, butterfly, backstroke and breaststroke, and has been part of all three school-record relays. Grand Haven as a team finished seventh at Saturday’s Finals, up from 10th a year ago, 12th her sophomore year and 15th when she was a freshman in 2016.

Next up for Ackerman will be another club season as she prepares to swim at next summer’s Olympic Trials and then join University of Michigan’s program, which finished third at last season’s NCAA Championships. She expects to swim the 200 and 400 IM races, freestyle and backstroke moving forward, with an eye on also competing at the 2024 Olympic Trials. Her IM time from Saturday is the fastest by a high school swimmer in the nation this fall according to swimcloud.com, and her backstroke time ranks 12th nationally. Ackerman, who also played high school tennis as a freshman, carries a 4.11 grade-point average that places her among the top 15 academically in her graduating class at Grand Haven. Math and science always have been her strengths – and she’s planning to study engineering at U-M.

Coach Doug Thorne said: “Kathryn is by far one of the most passionate, but humble student-athletes I've ever coached. Her love for the sport is like no other.”

Performance Point: “I think the biggest thing was just having the chance to spend my last high school state meet with the girls that I started swimming with – I’ve been swimming with some of the same girls since I was 8 years old, so it was bittersweet,” Ackerman said. “But it was a lot of fun to finish off the meet with the 400 freestyle relay where we were runner-up, and to swim to those two championships was a lot of fun too. To finish off on that note was good.”

Go Bucs: “High school sports have been incredible. Going into high school swimming, I wasn't expecting to accomplish this much just because I've been so familiar with club sports my entire life. To go through these four championship meets and set records, and experience all of these accomplishments that I have, it's been incredible and I wouldn't ask for anything more from high school sports. … (I’ll miss most) the team and the team atmosphere. The girls are so supportive and encouraging at every meet. They're behind the lane, cheering you on, and always wished me good luck before races. So I'll definitely miss the team and obviously the coaches and everyone that surrounds that sport too.” 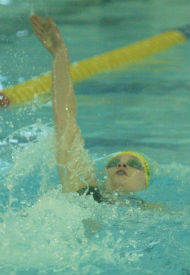 Go State to Go Blue: “Actually, my entire family, they’re pretty big Michigan State fans. So it’s kinda hard to make the switch (to U-M), but just recognizing that Michigan has such an excellent swim program and school made it easier to make the switch. My family is supportive of anything I do.”

Plan to succeed: “Growing up, I always just focused a lot on my stroke technique. It wasn’t always about swimming the most yards, or high-intensity workouts. It was about doing drills and starting that foundation so I could go faster in high school. It definitely paid off in these four years … and the times that I have right now are looking really good going into Michigan. So I’m looking forward to the next chapter, but I definitely have to thank all of my coaches for all of the work that they’ve done for me. I appreciate all of them and the support they’ve shown me throughout this process too.”

Learning to lead: “There have been some girls that I've swam with on my club team in Holland, and they have always been so encouraging and supportive of their teammates.  I not only look up to them for their characteristics of being supportive and encouraging, but they're also super hard-working, and they're fast, so I've always had them as role models. … It's helpful to have someone who has been that kind and supportive to me. They've exemplified so well what a good leader is. It was helpful to have that foundation as I went through high school and was the leader of the younger girls. (Also) my older sister Anna was on the high school team through her four years too, and she was elected as a captain her junior and senior year. S I also learned a lot from my sister on how to be a supportive and encouraging teammate. A lot (of credit) goes out to my sister as well.”

PHOTOS: (Top) Grand Haven's Kathryn Ackerman swims to the championship in the 200 IM during Saturday's MHSAA Finals at Holland Aquatic Center. (Middle) Ackerman also repeated as champion in the backstroke. (Click for more from HighSchoolSportsScene.com.)