This season’s Lower Peninsula Girls Swimming & Diving Finals all have fascinating storylines – and all three are vastly different entering the weekend. 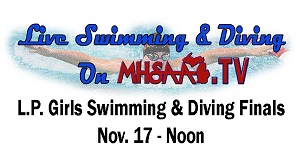 In Division 3, we have some of both. A handful of reigning title winners return – plus powerful East Grand Rapids, back in Division 3 after winning Division 2 a year ago.

The Division 1 Finals will be competed at Eastern Michigan University, with Division 2 at Oakland University and Division 3 at the Holland Aquatic Center. Preliminaries are Friday and Finals are Saturday, with action beginning at noon for both. All three Finals will be streamed live and can be watched with subscription on MHSAA.TV. Click for lineups and seed times for all three meets.

Mercy has won three Division 1 championships this decade and also finished runner-up three times. The Marlins don’t have highly-seeded individual favorites but will bring all three relays, six individual event top-16 seeds and a diver to EMU. Farmington/Harrison finished third a year ago and brings more star power with three top seeds among nine individuals and two relays seeded to score. Brighton is looking to move up from sixth last season with 14 individuals and two relays seeded to score.

Casey Chung, Ann Arbor Skyline junior: After winning last season’s backstroke championship and coming in sixth in the 50 freestyle, Chung is seeded first in the backstroke (55.14) and just behind Ackerman in the IM (2:04.32).

Michaela Briggs, Byron Center senior: Last season’s backstroke runner-up is seeded first this time (56.84) and also seventh in the IM (2:09.83) after finishing third in that race a year ago.

Claire Newman, Midland Dow junior: Just missing her first two seasons, Newman will go for her first championships as the top seed in the 50 (23.31) and 100 (50.29) freestyles. She finished runner-up in both races as both a freshman and sophomore.

Gracie Olsen, Fenton freshman: The Tigers’ standout will enter her first Finals with the top seed in the IM (2:04.04) by more than four seconds and the third seed in the butterfly (57.70).

Ellie Chalifoux, Birmingham Groves junior – After missing the semifinal cut a year ago, Chalifoux enters this weekend coming off a qualifying meet win where she posted the highest score in all of Division 2 at 418.60.

Lacey & Lexi Mirandette, Grand Rapids Northview seniors – Twins, the Mirandettes posted the second and third-highest qualifying scores in all of Division 2 (414.75 and 412.75, respectively) to take the top two spots at their qualifying meet. Lacey took fourth and Lexi fifth at the Finals a year ago.

Byron Center 200 freestyle relay: The group of senior Sydney Randall and juniors Maria Poll, Corrina Beecher and Emily Poll enter with a seed time of 1:32.30 – 1.1 seconds faster than the meet record swam by East Grand Rapids last season and 47 hundredths of a second faster than the all-Division Finals record by Ann Arbor Pioneer in 2002.

Rhianna Hensler, Pontiac Notre Dame Prep junior: Hensler has won two butterfly championships plus the 50 freestyle title last season, and she’s seeded first in both races at 54.96 for the butterfly (which would break her meet record of 55.67 swam last season) and 23.74 in the sprint.

Sophie Housey, Grosse Pointe Woods University Liggett junior: Seeded first in the 200 freestyle (1:48.60) and second in the 100 (53.06), Housey could claim her first high school titles after competing at the Winter Junior Nationals East a year ago.

Sydney Higgins, East Grand Rapids senior: Higgins helped the Pioneers to the Division 2 team title last year with a third in the backstroke and 12th in the IM. Back in Division 3 – where she won the backstroke in 2016 – she’s seeded sixth in that race (59.34) and 10th in the IM and expected to swim on two top-four relays.

Alysa Wager, Battle Creek Harper Creek junior: Wager took seventh in the butterfly and 15th in the IM last season, but in the breaststroke this weekend she’s seeded first (1:06.63) and also second in the butterfly (57.13).

Mackenzie Crawford, Milan senior: The two-time reigning Division 3 diving champion scored 52 points more than anyone else in her division during the qualifying meets with a 465.45.