The rigors of competing in a competitive Ottawa-Kent Conference Red have their benefits.

West Ottawa recently claimed an outright O-K Red title with a victory at the final conference meet. The Panthers ousted a trio of top-10 Division 1 teams, including runner-up Rockford, en route to the victory.

The Panthers will enter this weekend’s Lower Peninsula Division 1 Finals at Eastern Michigan University tied for the No. 10 spot in the final rankings with league rivals Hudsonville and Grand Haven, and just behind the No. 8 Rams.

“We’re very blessed to swim in a very talented conference,” said West Ottawa coach Steve Bowyer, who has guided the program since 2006.

“Rockford, Hudsonville and Grand Haven are all ranked in the top 10, and to win the O-K Red you need an incredible amount of depth. That’s one thing our team had this year.”

It was the second straight O-K Red championship for the program. The Panthers also swept the league dual meets.

“That was a great time, and it was kind of a surprise,” Afrik said. “We knew some of the teams were pretty evenly matched, but after prelims we felt pretty secure – and to win it twice in a row out of my four years was really great.”

The Panthers hope to carry the momentum from their conference success into this weekend’s Finals. They will send 11 athletes – 10 swimmers and a diver – and have aspirations of finishing among the top 10.

West Ottawa finished eighth in 2017, but just a point out of seventh and 29 out of fifth. 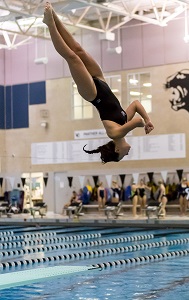 “Coming into the meet, our goal as a program each year is to try and be in the top 10,” Bowyer said. “We feel like if we can consistently be a top-10 team at the Division 1 meet, then we’re doing some good things and we’re moving in the right direction.

“We know that we have our work cut out for us because there are a lot of great teams this year and a lot of fast relays. The key to finishing in the top 10 is to score three relays, and that’s our goal.”

West Ottawa won the LP Division 1 title in 2012 and has placed among the top 10 consistently over the past decade.

Bowyer attributes the team’s ability to maintain consistency at the Finals to a dedicated group.

“We have a lot of kids who are very committed to the sport, and we’ve been fortunate to have a number of kids come through the program who have been committed to swimming in-season and out of season,” Bowyer said. “And you get a few of those coming through, and then they pull a few kids along with them and it’s been really cool to see the program grow the last 10 years.”

Afrik will be the catalyst this weekend and has the potential to finish among the top 10 in the 50 and 100-yard freestyles. She finished eighth in the 50 and 14th in the 100, and helped two relays to fifth-place finishes last season.

“Hopefully we can get some individual PRs (personal records) and get top eight in two of our relays,” Afrik said. “I would like to get the school record individually, and that would be nice to have. I just want to have a great last meet with my team.”

Junior Ryann Harper will attempt to help her team in the diving portion of the meet after also competing at the Finals as a sophomore.