Westwood, which gained at least a share of title for also the 10th time in 11 years, posted 22 points and was followed by West Iron County with 15 and Iron Mountain with 11.

“This is an exciting day for the girls,” said Westwood coach Sarah Massie. “One of our goals was definitely to win the M-PCs (Mid-Peninsula Conference). After a big win over Negaunee, we were ready to go. We didn’t have a dual meet with West Iron because it got rained out. We didn’t play them until today. The girls just had to play their game, and it worked out for them.”

The Patriots won 6-of-8 flights, including all four singles on this cloudy, chilly and windy day.

Senior Madelyn Koski became a two-time Finals champion by taking a 6-1, 6-0 decision from Iron Mountain’s Macy McCormick at No. 1 singles. She previously was part of a No. 3 doubles winner in 2016 and was runner-up at No. 1 singles in 2018.

“I’m pretty happy,” said Koski. “Every team I’ve been on worked pretty hard. It has really been fun to be on these teams. I’m pretty sad to see it end.

“This is probably the best I played in the U.P. Finals. I just learned as I went on. It was definitely a little windy, and I had to adjust my game – although, I’m used to the wind.”

Classmate Tessa Leece won for the fourth consecutive Finals, topping Iron Mountain’s Claire Mongrain 6-3, 6-2 at No. 2 singles. Leece teamed with Koski in 2016, won No. 4 singles as a sophomore and No. 2 also as a junior.

“I just focused on hitting good shots and tried to be patient,” said Leece, who also runs on the school’s cross country team. “I knew what to expect, which comes with experience.

“This feels so good. We worked so hard for it. We wanted to end on a good note.”

“I was excited to get to the finals,” said Morel. “She was very consistent, and her groundstrokes were working pretty well. She hit the ball right to me, and I had to play it on the run.” 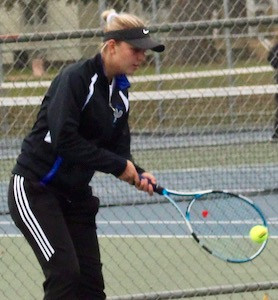 “It feels like it was a reset,” said Mariuzzo, who helped the Patriots’ duo regain control with three quick overhand taps in the third set. “I think those shots set the tone. Those definitely gave us a lot of momentum. We just had to refocus.”

Nelson also had some success with overhand taps.

“Once we hit the reset button, we didn’t want to lose again,” she said. “We work real well together. We had been competing with Negaunee and Marquette all year, which prepared us well.”

“Natalie finishes every play at the net,” said Gilles, who became a two-time champion. “Communication is key. We made sure we switched when the ball went to the other side of the court. We felt we had everything pretty much under control. I definitely wanted to win again. There was a lot of pressure coming in.”

“We hit the angles pretty good,” said Bociek. “Our overhand shots were working pretty good. This is the third U.P. title for both of us. We just tried to play this like any other match. I think this will be a pretty big motivator for next year.”

“We took third place today, and that’s about where I expected we would be,” she said. “Macy, Claire and Arianna made to the finals in singles and played well. Our doubles teams improved upon their results from earlier in the year, and I was happy with their performance. It was a fun and enjoyable season, one which the girls should be proud of.”

PHOTOS: (Top) Westwood's Madelyn Koski returns a volley during her championship match at No. 1 singles Wednesday. (Middle) West Iron's Livea Mazurek returns a shot during a match also at No. 1 singles. (Photos by Matt McCarthy.)