KALAMAZOO – There were cheers and congrats after the final match at Saturday’s Division 3 Finals at Kalamazoo College.

On the other side of the net, Detroit Country Day’s tennis players mostly were speechless as senior Sasha Hartje pulled aside a teammate to tell her it was OK.

The Yellowjackets had fallen in the final match of the day. But they’d won the first 39 of the weekend. So for the veteran Hartje, surrounded by mostly younger teammates, it was an understandable but still weird scene – one point shy of perfect was still perfect enough for the repeat champions.

“We’ve never done this well, collectively, as a team. And we’ve never been as bonded as we are as a team this year, so it was unbelievable my senior year to be this close with all my teammates and to win this – and I got to win with my sister, which was super exciting for me.”

Country Day cleared the field by 16 points after last season winning the Lower Peninsula Division 3 title by only one.

On the doubles side, Hartje and her sophomore sister Elle gave up only two games on the way to their win. Junior Heather Zimmerman and sophomore Tara Rahmani at No. 2 and juniors Jenna Lee and Maya Nassif at No. 4 also made it through their brackets without giving up a set.

That left the No. 3 doubles final as the last match of the tournament. The crowd gathered anticipating that another Country Day win would give the team the first perfect score in MHSAA Tennis Finals history.

But after winning the first set on a tie-breaker and then dropping the second 6-2, Bloomfield Hills Cranbrook Kingswood seniors Francis Dube and Ava Harb put the finishing touches on a second straight flight championship by claiming the third set 6-2. Dube and Harb had won the No. 4 doubles title in 2016.

Still, Country Day’s 39 team points tied Cranbrook Kingswood’s 2013 team for the most at a Girls Tennis Final in at least a decade.

“Obviously we want everyone to win just because they feel better when they win. But we’re proud of everyone, and 3 doubles, they played a really tough match and fought all the way through,” Country Day coach Jessica Stencel said. “It’s hard being the only team that doesn’t come out on top, but they still got second. I think that’s pretty great too. And 39 out of 40, I think that’s a pretty solid year.”

It had an interesting start. Hartje, last season’s champion at No. 1 singles and the runner-up in 2015, suffered multiple ankle sprains playing an early game for the soccer team and had to miss six weeks for recovery.

By the time she returned, she said, it didn’t make sense to challenge for her former spot atop the singles lineup – so instead she joined her sister at No. 1 doubles and helped Elle earn a second straight championship at that flight. 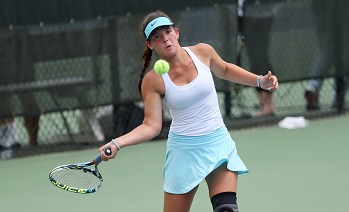 “We’re really lucky that Monique (Karoub, who won No. 2 singles in 2016) is equally as talented. She finished barely losing any games in this entire tournament,” Stencel said. “Sasha is so talented and really helped us out at No. 1 doubles, and the whole way from top to bottom they did really well this year.”

So did Grand Rapids Christian, the runner-up for the second straight season – but this time in a self-admitted surprise. The Eagles graduated seven from the team that just missed winning a year ago, and had only two senior starters and three freshmen in the doubles lineup.

“You just try to go with a good core. We had a great set of leaders at the top, Leah (Newhof) and McKenzie as number one and two singles players, and when you have that luxury of great players at the top, you really look to make sure your depth is good,” Grand Rapids Christian coach Tim Morey said. “That’s where we kinda made our money. … We really looked to build with some youth. We have three freshmen and a few juniors, and we have a really nice mix that allowed us to have the depth we needed to be successful when we got to the state finals.”

Adding to the historic nature of this tournament was Imlay City senior Grace Whitney. She advanced to the championship match at No. 1 singles before falling to Karoub 6-0, 6-1, to end a mighty rise among the state’s elite.

As a freshman, Whitney was the first player from her school – girls or boys – to qualify for the MHSAA Tennis Finals. Last spring as a junior, she advanced to the No. 1 singles semifinals as the fifth seed. She entered this weekend seeded second.

“I’m from a small town and there’s not a lot of people who go do great big things, so it really means a lot,” said Whitney, who will play next season at Wright State University in Ohio. “And all the people in my town all support me.”