PORTAGE — With her bubbly personality and bright smile, Abby Carpenter looks like any other tennis player trying to win points for her team.

But the Portage Central sophomore's path to return to play for one of the state's top teams has been anything but typical.

Carpenter has suffered eight concussions and fought her way onto the team through physical therapy, medication and sheer determination.

“The first (concussion) was a mild one in fifth grade,” she said. “It was playing badminton in gym class.

The one in tennis sidelined her all last season, so she is doubly excited now that the Mustangs have qualified for the MHSAA Lower Peninsula Division 2 Finals at Holland.

“I was at the net and someone was serving and served it into the back of my head in warm ups, actually, so I didn’t get to play a single match last year,” she said.

Her love of sports has kept her fighting to play, and her perseverance has kept her on the court, although it has not been easy.

“I don’t normally have a stutter but I actually have something called concussion conversion syndrome, meaning no matter how often my head’s hit, my brain tries to shut itself down and it goes into shock and tries to protect itself, causing concussion-like symptoms,” she said.

She also has vision issues.

In spite of all that, she played her way to the No. 4 singles spot for coach Peter Militzer’s Mustangs.

“I’ve always been over-competitive and I don’t like the thought of letting other people down because of my individual struggle,” she said. “I’m hardest on myself more than anyone, so I don’t want to let myself down. 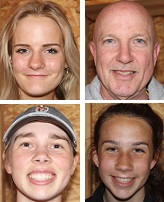 “Tennis is the only sport I’m cleared to play by my neurologist.”

Carpenter gets treated at The CORE Institute in Brighton and “I’m under intense concussion treatment and take daily medication and physical therapies,” she said.

“At one point, I had to relearn to talk and walk because I got such a bad concussion. It’s been a long road.”

Portage Central qualified for the MHSAA tournament May 31-June 1 by finishing second to Mattawan at last weekend’s Regional.

Militzer was not sure how the team would fare since he has just one senior, Riley Burns, who teams with junior Lea Stephen at No. 3 doubles.

‘We are really strong at No. 1 singles (junior Casey Smith) and No. 1 doubles (juniors Ashnu Mehra and Kimberly Kovacik, who won the Regional title) but I think we have good depth at both singles and doubles,” Militzer said.

“Any time you have one senior, you don’t think you’re going to do really well. But we have a good nucleus of juniors and some really good freshmen and a couple new players.”

One of those surprising freshmen is Sydney Sonday.

“She’s a swimmer but her mom and dad are avid tennis players,” Militzer said. “She picked it up quick and is doing quite well.”

“Going into the season, we’re looking at our lineup and we knew (freshman) Diya (Singh at No. 2 singles) and (freshman) Carly (Smith, No. 2 doubles with junior Alyson Miller) coming in would be good and would contribute at a high spot, but we weren’t sure where we were going to be in singles.

“Sydney settled in at 3 singles, and Abby has done well at 4 singles.”

Casey Smith has played at the top spot all three years.

“It was kind of nerve-wracking at first, especially freshman year, because I had never really done a team sport since elementary school. So to be put into that atmosphere was definitely a learning moment for me,” said Smith, who also competes in USTA tournaments.

“It taught me a lot about myself. I feel like I learned to deal with pressure in nervous matches. We all know that in every single one of our positions, we’re all worth the same. We just have to do our jobs.”

Portage Central improved from 11th at the LPD2 Finals in 2017 to eighth a year ago, and moved up to No. 8 in this week’s coaches association rankings with another Finals opportunity coming up. 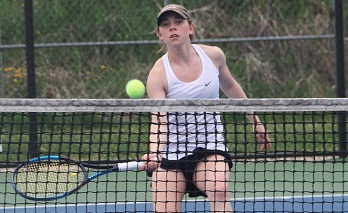 “It’s so exciting for all of us because it means we get to keep hitting and get to keep practicing with each other for another couple of weeks,” Smith said.

“We never want it to end at Regionals when we know we can go farther. Just to play a lot more competition and to play teams we don’t normally play is really exciting.”

After finishing runner-up to Mattawan’s Kate Novak at Regionals, Smith hopes to be seeded at states for the first time.

“I’m tired of playing seeds in the second round,” she said. “I’ve had to play first round, and I’ve lost my second round both years.

“Both have been good matches, but I really want to start second round this year. That’s a goal.”

“She can run down things, and players who go out on the court against her will have to hit two or three winners before the point ends,” he said. “That can wear on a person during a match.

“She’s always had a few weapons, and her weapons are getting stronger and more consistent as she’s matures.”

With her sister Carly playing doubles, Casey Smith said she tries to keep an eye on her sister’s match when they are both on the court.

“I feel like I’m only watching when it’s not a distraction,” Casey Smith said. “I feel like I’m pretty good at pulling myself back into my match. But I do watch over there on changeovers.”

Although she is the younger sister, Carly Smith is definitely not the “little” sister.

At 5-foot-9, she also plays volleyball and is very happy playing doubles during the spring. She and Miller were No. 2 doubles champs at Regionals.

“I like when you have someone to pump you up and cheer you up when you’re down,” she said. “Singles is not my thing.”

Sophomores Molly Rohs and Jana Schnur round out the roster at No. 4 doubles.