By Alan Babbitt
Special to Second Half

Cranbrook-Kingswood won seven of eight flights for 39 points — one point from perfection. The Cranes finished comfortably ahead of runner-up Allegan (23).

It was a satisfying conclusion to a season that started slowly, Najarian said.

“We took a Florida trip at the beginning of the year for spring break, and we were down there for a week. We all were really frustrated with our play at the beginning because we were working so hard. We felt like nothing was coming together,” Najarian said. “Today it finally came together. This is a really happy moment.”

Cranbrook-Kingswood earned a three-peat of team titles with its fifth consecutive top-two finish.

“We came in favored, but all year our girls worked really hard,” said Cranbrook-Kingswood coach Jeff Etterbeek, a Holland native. “They came out here in some tough, windy conditions and kept their composure. They played one point at a time and did a great job. I’m really proud of all of them. They really came through.”

Najarian contributed by taking first at No. 1 singles.

In Saturday’s final, she defeated a familiar foe — second-seeded Sydney Liggins of Grand Rapids Catholic Central — 6-1, 6-4. It was a rematch of the 2012 title match.

“She’s been my biggest competitor the past few years. She’s played so well,” Najarian said. “She came out a little nervous. Usually it’s the opposite. I got a better head start. Last year, I went down 0-4 and had to fight back. This year it was the opposite. She put up a great fight. It means a lot I could pull through again.” 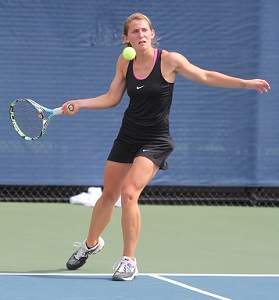 It was the first MHSAA doubles title together for Drozd and Harness, who went unbeaten. Drozd earned one title as a freshman at No. 2 doubles before finishing Finals runner-up the past two seasons at No. 1, including 2012 with Harness.

Harness moved from No. 3 singles after her sophomore season to play with Drozd.

“When her partner graduated, I wanted to jump in. We’ve been such good friends,” Harness said. “I think the fact we lost (in the finals) last year made us want that much more this year. We were motivated and worked hard all season.”

At No. 3 singles, top-seeded Allison Motea of Cranbrook-Kingswood beat second-seeded Haley Mullins of Detroit Country Day 6-2, 6-2 in the final.

At No. 4 singles, Cranbrook-Kingswood’s Sarah Lipworth held her No. 1 seed, scoring a 6-0, 4-6, 7-6 (5) win in the title match against third-seeded Sarah Carroll of Detroit Country Day.

In doubles play, Cranbrook-Kingswood’s second-seeded No. 2 pairing of Kendra Sweet and Christina Roualet won by knocking off top-seed Blake Day and Emmarie Gorby of Allegan 6-4, 7-5 in the finals.

At No. 3 doubles, Cranbrook-Kingswood’s No. 1-seeded duo of Briana Latica and Holly Meers defeated sixth-seeded Taylor Orr and Carlie VanKlompenberg 6-0, 6-1 for the championship.

At No. 4 doubles, Cranbrook-Kingswood’s top-seeded pair of Lauren Lanzon and Emily Harvey beat second-seeded Anna Bosgraaf and Lisa Busscher in the final 6-2, 6-1.

Najarian now has her sights set on a rare four-peat of MHSAA Finals flight championships.

“I hope so,” she said. “I worked a lot over the summer. Staying healthy and not getting injured is important. (Liggins) won’t be back, but there’s still some good competition to get used to. I got used to her.”

Etterbeek is confident Najarian will be in the hunt again next spring.

“She has a lot of variety in her game. She can beat you in so many different ways” Etterbeek said. “She’s just a smart experienced player. She is such a great competitor. She’s going to figure a way to beat you when she’s not playing her best.

“That’s certainly proven so far because she’s never lost a match. It doesn’t always go perfect. She’s had some close matches this year, and she came through every one of them. She’s a great leader on our team. We’re so happy to have her, obviously.”

PHOTOS: (Top) Cranbrook-Kingswood's Alexandria Najarian sends a shot during a No. 1 singles match; she won the flight for the third straight season. (Middle) Allegan's Christin Drozd, together with partner Kaycee Harness, won the No. 1 doubles championship. (Click to see more at HighSchoolsSportsScene.com.)