MIDLAND – Ann Arbor Pioneer coach Tom Pullen has watched his participation numbers decline for girls tennis, but he knew he had a great player coming this year in freshman Kari Miller.

The 15-year-old comes from great bloodlines, and as the top seed proved she was up to the challenge by capturing the Lower Peninsula Division 1 No. 1 singles title at the Midland Tennis Center with a 6-1, 6-0 victory over sophomore Tia Mukherjee of Bloomfield Hills on Saturday.

Her aunt, Annie Miller, played on the pro circuit and at one point reached the top 40. She gave 14-year-old Serena Williams one of her first losses as a professional. Annie Miller’s picture is displayed at the Midland Tennis Center, where she spent years honing her game.

Father David Miller starred at Midland Dow, and they still talk about his loss to a Pioneer player back in 1991 tournament.

“He said that was a crazy match,’’ said Kari.

Now his daughter is the star at Pioneer.

“The expectation was to win, and I thought I could win,’’ said Miller. “I played Tia before in USTA, and that helped. I felt good for the most part. There were a few games where my backhand wasn’t its best, but I was able to fix it. I felt good the whole match.’’ 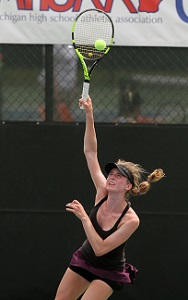 Miller broke Mukherjee in the fourth game to go up 3-1 and cruised to the victory.

“She has it all,’’ said Pullen of Miller. “She has the heart and the brains. She has all four things you need; she has the length, the strokes, the brains and the heart. I just put her out there and say go get ‘em.’’

Miller breezed through the season and with reigning No. 1 singles champion Anika Yarlagadda of West Bloomfield deciding not to play high school tennis, the battle for the top spot came down to Miller, Maja Pietrowicz of Sterling Heights Stevenson,  Mukherjee and Ava Thielman of Utica Eisenhower. Thielman lost to Mukherjee in the semifinal.

“I really like my team; it’s really fun,’’ said Miller. “It’s a team, and I like it because kids from my school start to know that I’m good at it and I like that.’’

Her teammates started laughing behind her.

“Playing (USTA) tournaments is not like being in school, so only my closet friends know about what I do.’’

Miller rose as high as sixth in the nation at 14-and-under on the United States Tennis Association tour and now plays 16- and 18-under.

And that ended up a significant win for an additional reason. The battle for the team title came down to 2016 runner-up Northville and reigning champion Midland Dow. Both finished with 30 points to share the championship.

“The key is no cell phones at practice and no sweets during the season,’’ said Northville Coach Linda Jones. “We were playing in a quad and a mother brought chocolate chip cookies. I said, ‘Are those sugar free?’ And she said no and walked away.’’

Renee Torres clinched the tie with Northville, rebounding from a 1-6 loss in the first set to win the last two 6-1, 6-3 over Dow’s Hadley Camp at No. 3 singles.

“I knew she had played three sets in the semifinal, and I could sense she was getting tired,’’ said Torres. “I felt the match changed in the second set.

“Getting a tie for the team title is great. We’ll take it.’’

Dow’s Sarah Ismail, the reigning No. 3 singles champ, won the title at No. 2 singles over top-seed Laurel Sullivan of Grosse Pointe South, 6-2, 6-4.

“I played her earlier this season, and I actually lost,’’ said Ismail. “It’s good to come back. I was just more confident. I was making more shots and following through more. This year I had a lot more competition at states. Last year I only had the final, really. I lost to Northville twice this year, so it was really good to come back and beat them when it mattered.’’

Trying to repeat, Ismail said they felt the heat.

“It’s a lot of pressure when you’ve already won,’’ she said. “People are gunning for you the whole season. We just have a really big rivalry with Northville. We’re head-to-head all the time. I think the momentum from Friday carried over. Everyone was just confident in themselves. We all have nerves, but we all came in and we were playing really well.” 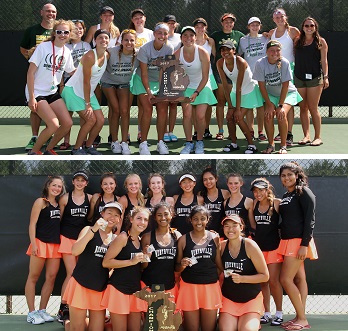 She won No. 2 singles a year ago, but suffered a right shoulder injury and had to have surgery, which threatened to end her season before she started.

“I started practicing here (left-handed) with the little kids,’’ said Szabo. “The joint was too loose and they had to surgically tighten it. As the season went on I could hit it pretty well, but I wasn’t in the lineup. When I was cleared by my doctor I asked Mr. (Garrett) Turner, ‘Do you think this is an option?’’’

The coach said OK, and she played her first match in March, left-handed, against rival Midland at No. 3 doubles with partner Christina Vanerkelen.

“I was terrified,’’ Szabo said. “I went to serve and said this is really happening. Christina played great all year, and she really carried me.’’

Szabo will go back to playing right-handed at Michigan State.

The duo beat Connie Gao and Andrea Nam of Northville 6-3, 3-3 when Northville had to retire, ironically, because of a shoulder injury.

Although they didn’t play together much of the year, Dow’s No. 4 doubles team of Maggie Schaller and Reema Patel defeated top-seed Lauren Ruby and Kaela Bernard of Bloomfield Hills, 6-4, 7-6.

“We interchange the lineup to see who plays the best together,’’ said Patel. “We played Bloomfield Hills before and lost to them in a tie-break. We knew how to prepare for the match. We know every point is important if we want to win the state championship.’’