KALAMAZOO — They swept the doubles championships.

But it was freshman Tate Lehmann – the top seed at No. 4 singles – who clinched the MHSAA Lower Peninsula Division 4 team title for Bloomfield Hills Academy of the Sacred Heart on Saturday at Kalamazoo College’s Stowe Stadium.

Going neck-and-neck with Grosse Ile, and with their final two matches still on the court, Sacred Heart co-coach Jim Slaughter said he knew his team needed one more point to clinch the title.

”We were hoping of the two we had out there, one would pull out a win,” the ecstatic coach said. “It is a lot of pressure. When (Lehmann) walked off, I told her it was the clinching match, and she lit up; she was surprised.”

Slaughter said the top-seeded No. 4 doubles team of senior Elia Wilson and freshman Gretchen Lemon hoped they wouldn’t be the deciding match: “Too much pressure,” he said.

The coach said he figured it would come down to Sacred Heart and Grosse Ile.

“Grosse Ile was right on our tail,” Slaughter said. “They were tied going into the last two matches. They’re a solid team. I think we knew it would probably come down to the two of us, just the way the seeds had fallen and by the regular season.”

Lehmann was getting her first taste of an MHSAA Finals tournament.

Sacred Heart finished with 29 points and Grosse Ile with 26. St. Francis was third with 17 points.

Ashby, headed to Western Michigan University in the fall, won the No. 2 singles title as a freshman and No. 1 as a sophomore. Last year, she lost to Ann Arbor Greenhills’ Kasey Gardiner in the No. 1 final, one of just two matches she’s lost in her four-year career. The other was this year to University of Michigan-bound Sara Remynse, a Richland Gull Lake senior who lost in the Division 2 final Saturday.

“This was a tough match,” Ashby said of Saturday’s final. “Colleen is a great player. She’s a tough player. I went out there with the mindset that it was going to be a tough match, and it was.” 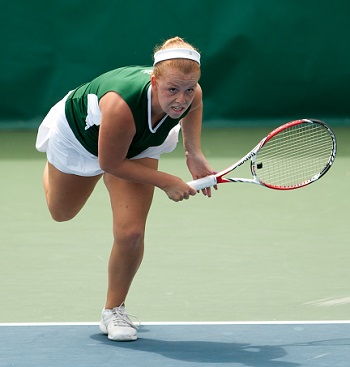 After dropping just one game in the tournament, Ashby lost on O’Brien’s first two services before finding her groove.

“I started out trying to play my normal game,” Ashby said. “I like to be an aggressive baseliner, but I had to take a lot of pace off the ball and change it up, trying to move her around the court.”

“”The girls definitely hit harder,” she said. “They want it more and they know how to compete, for sure. It’s definitely tougher.

Said Gabriel Richard coach Jim Sayed: “Colleen ran up against a better player today. It was a nice match all around. (Ashby) has incredible ground strokes, and there’s not many people who hit the ball like she does. It’s really tough to keep up with the pace of her ground strokes.”

Ashby’s game isn’t the only thing that caught the attention of WMU women’s coach Betsy Kuhle, who was in the stands watching her recruit on Saturday.

“Mostly it’s Meika’s attitude and work ethic that make her what she is,” Kuhle said. “She plays every point very bright. She has a game plan and she knows how to execute it.”

“She has a well-rounded game, big ground strokes,” he said. “Even more so, I’m really proud of Meika for the sportsmanship that she shows on the court.”

After a grueling, three-hour, three-set semifinal win, Grosse Ile sophomore Brianna Riley, the second seed, defeated Gabriel Richard senior Anjali Sood, the top seed, 6-1, 6-0 at No. 2 singles. Theirs was the final match on the courts.

“They gave me a break (after the semis),” Riley said. “I was so thankful for it. I never expected this was gonna happen. I rested, I ate a little bit, I drank a lot of water and sought some shade.”

She said playing a senior in the final was a bit intimidating.

“They have all the experience, all the years, all the matches, all the sets,” Riley said. “I didn’t have that. It was a pleasant surprise. I was just mentally trying to stay focused, making each shot. Staying consistent was the most important thing for me today.”

In spite of the loss, Sood said, “It’s been an amazing senior year. I’m glad how far I made it.

“(Riley) is a very consistent player. I tried, but she was very good. (Between the semi and final), you try to mentally prepare for the match, get up and get your feet moving and stay calm and focused.”

For the first time, Grosse Ile was playing in Division 4.

“We heard that (Sacred Heart’s) doubles were good, and they certainly were. We didn’t get a chance to play during the season. There were some good matches. We were just a little bit behind.”

Gabriel Richard tied for fourth with Kalamazoo Christian, each with 16 points.

“This was an outstanding effort from everybody on the team,” Gabriel Richard’s Sayed said. “We’re really happy with the results we’ve had. It was a fantastic effort all around.”

Kalamazoo Christian’s top seed, freshman Audrey Bouma at No. 3 singles, matched her sister, Jessica Bouma, who also won the No. 3 singles title two years ago as a freshman.

“(Jessica) just told me to stay confident and play as hard as I can; go out there and do my best,” said Bouma, who rolled to a 4-1 first-set lead, then pulled out a 6-3, 4-6, 6-0 three-setter against third seed Julia Formentin, a sophomore from Grosse Ile.

“In the third set, I just had to get my focus back in, especially from the second set,” Bouma said. “I just worked for every point and played as hard as I could.”

Kalamazoo Christian coach Allison VanderMeer said she was proud of the way the freshman bounced back.

“She could have very well folded in that third set and been done with it, but she’s a fierce competitor, and Audrey just stepped up her game like she did in the first set and followed through,” said VanderMeer, who gave the freshman a pep talk after the second set. “She needed to fire up. She just kinda lost steam. She took her foot off the gas pedal in the second set, and (Formentin) definitely took off from there.

“Audrey let off a little and she stepped up and the second set went by way too fast. The third set, I said step up your game a little bit, hit the ball like you know you can, don’t think too much about those shots. She definitely had the ability.”

Formentin said nerves kicked in during the final set.

“I was really nervous and going for too much,” she said. “I should have pulled through, but second place is good. She’s a very good player. It’s a big accomplishment, and I’m glad to be here.”

PHOTOS: (Top) The Bloomfield Hills Academy of the Sacred Heart girls tennis team poses with its championship trophy. (Middle) Kalamazoo Hackett's Meika Ashby finishes a serve during a match at No. 1 singles. (Click to see more at HighSchoolsSportsScene.com.)