MIDLAND – Runner-up to Detroit Country Day in 2021, 2019 and 2018, Bloomfield Hills Cranbrook Kingswood finally broke through with a cast of veterans and youngsters Saturday to capture the MHSAA Lower Peninsula Division 3 girls tennis championship at the Midland Tennis Center.

Cranbrook swept singles and scored 37 points, while Chelsea held off East Grand Rapids by one point, 21-20, to finish second.

Cranbrook previously had captured the team title from 2011 to 2015 before Country Day took over and won the following five championships in LPD3.

The Cranes' lineup featured one senior, two juniors, and nine freshmen and sophomores.

“This was very exciting,’’ Park said. “I knew a lot of people expected me to win and there’s some pressure with that, but I just wanted to go out and play my game. When warming up, I try to look at my opponent and see what their weak areas are. If it’s the back-hand, I’ll hit to the back hand. I was comfortable.

“When I play USTA I play to get better. Here it’s about winning the championship. We lost by one point to Country Day last year, so it was good to finally break through.’’ 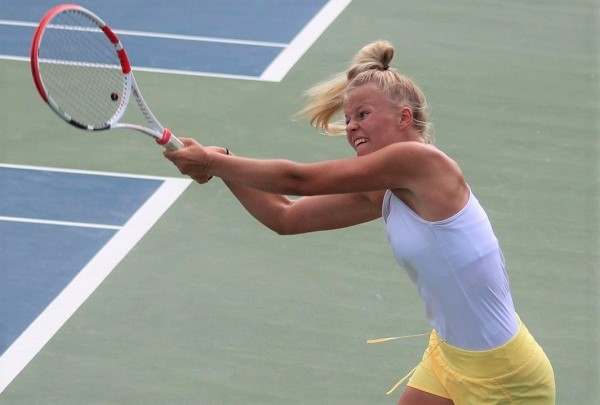 Aldrich entered the championship match coming off a semifinal with Bloomfield Hills Marian’s second-seeded Gaby Gryzenia that lasted nearly three hours. Aldrich previously had reached the No. 1 semifinals as a freshman and entered this weekend as the sixth seed.

Cranbrook senior Charlotte Brown, last season’s No. 2 singles champion, retained her crown and was the tournament’s first champ of the day with a 6-0, 6-1 victory over Chelsea sophomore Anne-Marie Begola. Brown was the top seed in the bracket, while Begola was unseeded but defeated the third, sixth and second-seeded players to reach the finale.

“I just decided to keep my head in the game and disregard anything about the lineup,’’ said Brown. “I just play my game. We’ve seen so much success this season. We had a lot of freshmen that came in this year and helped our team. Our No. 1 singles (Park) is a freshman, and she just beat everybody.

“I’m thankful for the way we played. Going back-to-back (at No. 2) is definitely a great feeling, but I’m more excited about the fact we were able to win the team title.’’

Top-seeded sophomore Sienna Ilitch gave Cranbrook another flight championship at No. 3 singles with a 6-3, 6-2 win over freshman Josie Arbanas of Stevensville Lakeshore, who also entered the tournament unseeded but defeated the second and third seeds to advance.

“I had a three-set match in the semis, which I did last year,’’ said Ilitch. “I got to the finals and said this is my second chance where I can get redemption. I locked in. I hit my targets. I played confident. I played wanting to win, knowing my team was relying on me. Even though our team was doing well overall, for me personally I wanted to be a state champion in my flight. Last year I lost in the final. Even though we were up, it mattered to me.’’ 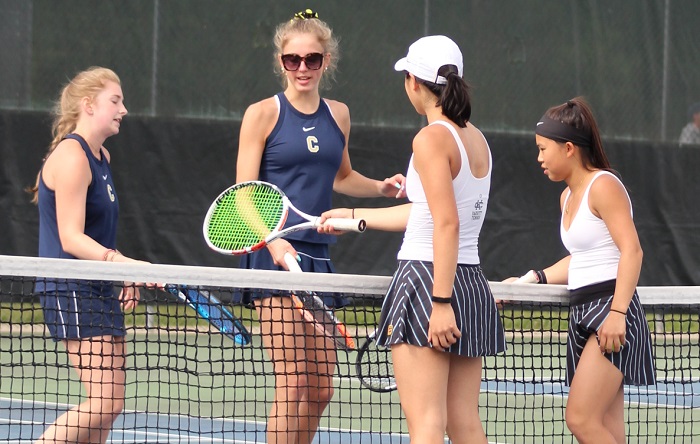 Upstart Chelsea’s runner-up team finish was its highest at a Girls Tennis Finals.

“One of the advantages we have is we have a middle school program, and we have a little kids’ program,’’ Chelsea coach Rahn Rosentreter said. “We really don’t have a lot of clubs. Most of our work is done during the summer. We’ve been lucky. We have a lot of parental support, and the school supports us. We have a community that puts a lot behind their boys and girls tennis.’’

After EGR, Bloomfield Hills Marian was fourth and Country Day fifth in the team standings.

PHOTOS (Top) Cranbrook Kingswood's Yenna Park prepares to return a volley during her No. 1 singles championship match Saturday. (Middle) Otsego's Aly Aldrich sends a shot back to Park during that title decider. (Below) Chelsea's Kendall Spink and Izzy Barkey and Cranbrook's Ava Clogg and Grace Zhang greet each other at the net during their No. 3 doubles match at Midland Tennis Center. (Click for more from High School Sports Scene.)