MIDLAND – The cancellation of last season due to COVID-19 didn’t affect Abby Siminski in the same way it affected her classmates in the Grand Rapids Forest Hills Northern girls tennis program, because she hadn’t planned on playing high school tennis in 2020.

But that hardly means it was lost on her and her current Huskies teammates that they were back playing for a championship Saturday at Midland Tennis Center.

Forest Hills Northern had a participant in every championship match and ran away with the team title, scoring 39 points by winning seven of eight flights. Bloomfield Hills Marian finished second with 25 points, one more than Birmingham Groves.

“It was sad for all of them (2020 seniors) because everything got cut short,’’ said Siminski. “Especially for the captains. I felt really bad for them. It’s a huge deal for us to be out here today and have someone in every flight. We’re just happy to be playing.’’

“It was tough not being able to play last season,” said longtime Huskies coach Dave Sukup. “We had three seniors on last year’s team that couldn’t finish their careers. We have four seniors on this year’s team. This is an experienced, talented group. This is one of the most talented groups we’ve had. It’s never over until the finals, but we got everyone through.’’

Northern’s first champ was crowned at No. 3 doubles, as Tanishka Shenoy and Maya Echtinaw won when their opponents retired due to injury. 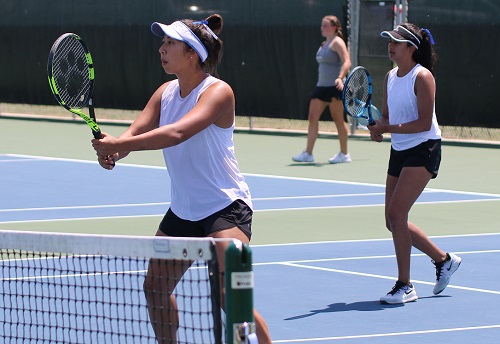 “It was tough not playing last season, but it may have been a blessing in disguise for me because I broke my foot. Winning this year was equally as exciting as it was in 2019.’’

Pena won No. 3 singles with a 7-5, 7-5 victory over Anna Dinsmore of Portage Central. Siminski defeated Groves’ Sullivan Patel 6-0, 6-2, to claim the championship at No. 1 singles; Siminski had finished runner-up at No. 1 in 2019.

Northern’s seventh flight championship came from Sophie Richards and Rhea Marwaha at No. 1 doubles. They defeated Makenna Crandell and Taylor Humphrey of Byron Center, 6-3, 6-2, in that final.

PHOTOS: (Top) Forest Hills Northern’s Abby Siminski returns a shot during Friday’s No. 1 singles play in Division 2. (Middle) Marian’s Gaby Gryzenia returns a volley during a No. 1 singles match. (Below) The Huskies’ Sophie Richards (left) and Rhea Marwaha await a serve at No. 1 doubles. (Click for more from High School Sports Scene.)