PORTAGE — Sisters Marisa and Kayla Nafso were ecstatic after pulling out a tough three-setter for the No. 4 doubles title Friday at Portage Central High School.

The last match off the courts, they had no clue that their team, Bloomfield Hills Academy of the Sacred Heart, won the team title at the MHSAA Lower Peninsula Division 4 tennis championship.

They were stunned to learn that their semifinal win actually had been team title clincher.

“Oh, we won?” Marisa, a junior, said, grabbing her sister in a big hug.

“Wow. I really wanted to win individually, but the team makes it 20 times better,” Kayla, a freshman, exclaimed with a huge grin.

North Muskegon and Portland tied for third with 18 points each, Grand Rapids West Catholic was fifth with 17 and Jackson Lumen Christi sixth with 16.

Marisa Nafso won a state title at No. 2 doubles in 2019, and her sister was thrilled to be her partner this year.

“I was really lucky because she won states when she was a freshman,” Kayla Nafso said.

“Because of her experience, I was more comfortable. It was great that I got to win as a freshman.”

The sisters said the final was the match that scared them the most.

The top seeds at their flight, they defeated Grand Rapids NorthPointe Christian’s Delanie Minnema and Caroline Rudolph, the third seeds, 7-6(3), 2-6, 6-1.

“We were watching them play at the other site,” Nafso said. “Creds to the team we played for playing two three-set matches back to back.”

The team win was the Gazelles’ third Finals title in a row, but the first under coach Chris Shaya. 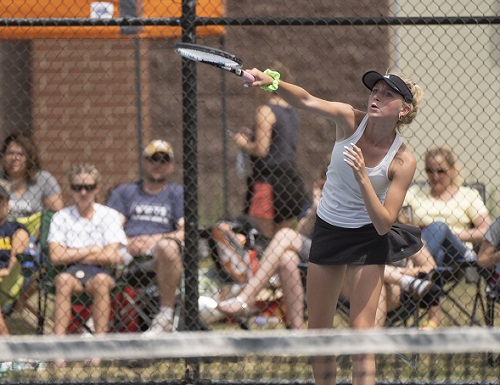 Neither the coach nor the players knew for sure they clinched the title until all matches were finished.

“I figured we won but I was going to wait for the team so we all could find out together,” Shaya said.

“None of us looked. I knew Traverse City was very strong in singles, and I knew we were strong in doubles. In singles, they competed extremely well. It was tough for us to overcome, and they deserve those wins.”

As a coach, Shaya said, “First of all, you want their experience to be fun. You want to teach them some life lessons about hard work and how that pays off, and sometimes it doesn’t pay off.”

At No. 1 singles, top-seeded Moorea McNalley finished the season undefeated after entering the tournament with a 28-0 record.

She lost just seven games over her four tournament matches.

McNalley also won the No. 1 singles title two years ago. (The 2020 season was canceled due to COVID-19).

As the top seed, she said she felt a bit of pressure coming into the tournament, “especially the further matches. They are all very good players.”

Bobrowski, a senior who plans to play tennis at Ave Maria University in Florida, said the two played earlier in the regular season.

“We went into a third set tiebreak then,” she said. “(Friday, McNalley) was definitely on her game and I made a few unforced errors, but it was a lot of fun.”

“My goal was to win but I got kind of nervous looking at the draw because I had never played the No. 2 seed,” the top seed said.

“All the other seeds I had played and had good scores against them, so I was really confident going in. I was preparing myself for playing the No. 2 seed — a lot.”

Lewis, who plans to play tennis at Hope College, said the afternoon wind was a factor in the match.

“That threw me off a little bit,” she said. “So much of it was just mental toughness. (Burg) was a really, really good player and could get the ball back with a lot of pace.

“It was just working against that and trying to find that little spot where I could move her around. The wind complicated all that.”

The other St. Francis singles champ was Jillian Sodini, the top seed at No. 3, who defeated Portland’s Adriana Krieger, 6-2, 6-1.

“I knew I had to keep my eye on the prize and stay calm with it and play my game,” said Sodini, who ended her senior season undefeated. 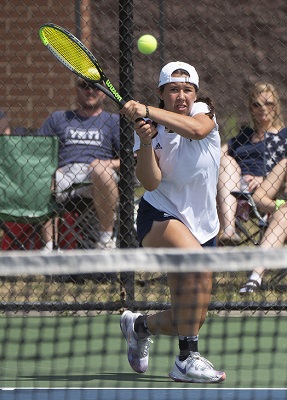 “(Second place as a team) is awesome. We have six underclassmen this year and six seniors. You’ve just got to bring it at states. We’ve been pretty rowdy all day.”

“Rowdy” is the perfect word for one of the loudest and most supportive teams at the tournament.

First-year coach Dane Fosgard thought for sure this would be the year St. Francis won the team title after finishing runner-up three of the last five seasons.

“Just when you have a team you think is good enough to win States, it’s not good enough,” he said.

“We have good players coming up. This year’s going to be tough to beat.”

He gave a nod to his three senior singles players, all co-captains, for being leaders on the team.

“Six seniors and three of them went out as finalists and two state champs,” he said. “Those three seniors, Lilly, Alexi and Jillian, have worked so hard all four years of their high school careers, both on the court and off the court.

“Having those three on the same team is something special. They’re all No. 1 singles-caliber players.”

Seeded third at No. 4 singles, Olivia Eaker of Jackson Lumen Christi was the lowest seed to win a title.

Both Eaker and Graham were exhausted after their match, the next to last off the courts.

Just a freshman, “I don’t even know,” Eaker said, catching her breath, about winning the final. “I’m honored and very grateful for this.

“I feel amazing, excited. It was definitely tough. We both worked really hard for it. We gave it all we had.”

Goszkowicz, a senior, was one of the most exuberant winners, commenting, “My goal was to make it to the second day.”

PHOTOS: (Top) Sacred Heart’s Marisa Nafso returns a volley during her and sister Kayla’s championship match win at No. 1 doubles Friday. (Middle) Clarkston Everest Collegiate's Moorea McNalley follows through on a return during her No. 1 singles championship match. (Below) Lilly Bobrowski scored big for Traverse City St. Francis also advancing to the No. 1 singles final. (Click for more from High School Sports Scene.)