GRAND BLANC – The unthinkable almost happened in one regard, then it did happen in another at the Lower Peninsula Division 3 Girls Tennis Final on Saturday.

The No. 1 singles standout for the Hornets, who also happens to be one of the top junior players in the country, Daavettila entered Saturday’s championship match against Sasha Hartje of Birmingham Detroit Country Day having not dropped a game in any of her matches this season.

But that streak was in jeopardy during the fourth game of the second set, when Daavettila struggled with her serve and fell behind 30-40 to Hartje.

Following a second serve, Daavettila then hit a forehand that hit the top of the net solidly and went straight up into the air.

The ball stayed in the air and then … dropped softly on Hartje’s side.

Game back to deuce.

“I was really lucky,” Daavettila said. “I’m sorry to Sasha, but I was happy.”

Daavettila ended up staving off another game point, won that game to go up 4-0 and then wasn’t challenged the last two to beat Hartje, 6-0, 6-0, and win her second straight No. 1 singles title and extend her streak of games won to 245.

Given her dominance and national acclaim on the junior circuit, Daavettila sometimes gets asked why she bothers at all to play in high school.

But seeing teammates wearing shirts with her name on it cheering her every move, and the fact she gets well-wishes from classmates while walking the halls at school, make it an easy answer for her.

“The girls, I love them and I do it for the school,” said Daavettila, who also announced that she recently committed to play in college at University of North Carolina. “It’s great and supporting. Getting ready, that is how it is going to be in college. The USTA, it’s single so it’s a lot of individual. It’s nice to be on a team.”

Next up for Daavettila is a busy summer, which includes competing at tournaments each weekend, most notably a U.S. Open qualifier and a tournament in California.

As for the unthinkable that did happen, it was that Bloomfield Hills Cranbrook Kingswood won its fifth straight team title despite not having a top seed at any of the eight flights. 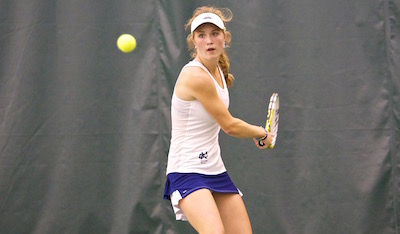 But Cranbrook was No. 1 where it mattered most, the final team standings, using its superior depth to win it all again with a tournament-best 32 points.

“This was a team effort,” Cranbrook head coach Jeff Etterbeek said. “Everybody peaked at the right time. All our girls played their best tennis of the year. I was very pleased with our whole team.”

Grand Rapids Christian was second with 28 points, and Detroit Country Day was third with 27.

Cranbrook Kingswood entered Saturday’s final day having advanced to the semifinals in all eight flights on Friday to take a one-point lead over Grand Rapids Christian, and the Cranes ended up making the finals at No. 2 singles, No. 3 singles, No. 4 singles, No. 2 doubles, No. 3 doubles and No. 4 doubles.

“We felt that coming into this (Country Day) had the strongest singles lineup, Grand Rapids Christian probably had the strongest doubles lineup and we were somewhere in between both,” Etterbeek said. “Fortunately for us it worked out that way.”

Country Day did dominate the singles flights, as Haley Mullins at No. 2 singles, Sadina Fadel at No. 3 singles and Sarah Carroll at No. 4 singles all ended up winning championships to go along with Hartje’s runner-up finish at No. 1 singles.

Grand Rapids Christian was victorious in two doubles flights, with the team of Hannah Slenk and McKenzie Moorhead at No. 1 doubles and the team of Natalie DeBoer and Kate Zwiers at No. 3 doubles winning titles.

Because of stormy weather in the area, all of the tournament’s action on Saturday was moved indoors to Genesys Athletic Club in Grand Blanc.