HOLLY – The first four championship matches Saturday at the Lower Peninsula Division 2 Girls Tennis Finals ended with a Bloomfield Hills Marian victory – and all within about 5 minutes of one another.

The four flight champions had more than their individual triumphs to celebrate, as they had also put an exclamation point on Marian’s first team MHSAA title since 2013. The Mustangs finished with 32 points, nine ahead of East Grand Rapids and Grand Rapids Forest Hills Northern, who tied for second with 23. Birmingham Seaholm was fourth with 22, and Okemos rounded out the top five with 21.

“It’s a great feeling,” Marian coach Lincoln Wirgau said. “These girls, they work so hard, and the season is so short from March to right now. They put in so much time and effort into a sport that’s not covered enough. They’re out here in 90-degree heat right now, playing two out of three sets, two matches, three matches a day; it’s wonderful to see their work pay off.”

Marian had the team title clinched before the finals started, but none of the players knew that. They certainly played as though there was a lot more still at stake, as four of the team’s five finalists walked away victorious.

Landis and Patterson were joined by the No. 2 doubles team of Melanie Roma and Shannon Flynn, the No. 4 doubles team of Christina Serra and Sophie Groves, and No. 4 singles player Sophie Balardo as champions in their flights.

“That’s a great rush,” Wirgau said. “A lot of them are seniors, and a lot of them have been working for this since their freshman year, so it’s great for those girls. For those seniors to go off winning their last match, and to do it next, next, next, next – that was something special right there.

Landis and Patterson were first, finishing off a 6-4, 6-4 win against rivals Caity Buechner and Meaghan Flynn of Seaholm.

“We still wanted to fight for the individual state championship,” Patterson said. “We didn’t want to just think, ‘OK, the team has it, we can just do whatever.’ We wanted it for ourselves, too. And the team did, too.”

“Over half of our team is seniors,” Balardo said. “So we all wanted to go out with a lot of will power and do this.”

While Marian wrapped up its title early, the No. 1 singles final went the distance, just as the first two matches between Okemos’ Alisa Sabotic and Mason’s Olivia Hanover have this season. And just like the first matches did, this one ended with Sabotic coming out victorious.

Sabotic, a sophomore, rallied for a 4-6, 6-2, 6-4 victory, capping her first year of high school tennis with an MHSAA title. 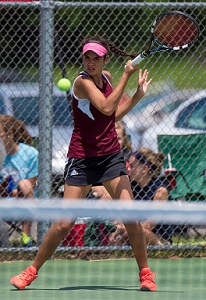 Sabotic responded well to the first-set loss, dominating the second set and jumping out to a 3-0 lead in the third. But Hanover didn’t relent, tying the match at 3-3, and earning a break of Sabotic’s serve after falling behind 5-3. Sabotic was able to finish the match off, however, with a break of her own.

“I was like hyperventilating for a second,” Sabotic said with a laugh. “I kind of told myself, ‘It’s all or nothing. Just play your game, go for the ball, and whatever happens, it’s meant to be.’”

Sabotic’s teammate, Monika Francsics, gave Okemos a sweep of the top two flights, as she defeated Marian’s Breann Lunghamer 6-3, 6-2 for the No. 2 singles title.

At No. 3 doubles, Forest Hills Northern’s team of Salonee Marwaha and Claire Tatman fought off a tough opponent and the home crowd with a 6-4, 7-6 (5) win against Holly’s Megan Lesperance and Nicole Johnson.