NEGAUNEE — Negaunee girls tennis coach Kyle Saari knows that come tournament time, it takes that extra bit of effort to put a team over the top.

Negaunee and Escanaba came into Thursday's MHSAA Division 1 Upper Peninsula Finals as virtual equals. Both went undefeated during the season and played to a 4-4 draw against each other. But it was the Miners who dug deep and found that next level, enabling them to repeat as U.P. champions.

"U.P.'s are always a difficult day. Pretty much every year, you need your girls or boys to do something they haven't done during the season in order to be successful today," Saari said. "When you win by one, that's exactly what it came down to for us today."

The match that put the Miners over the top was No. 3 doubles, where Alexis and Skylar Taavola overcame Escanaba's Katie Ross and Karly Mayville 7-5, 6-4.

"They lost a heartbreaker at the conference meet the week before, and I told them there was something bigger out there for them. They believed it, and were able to get themselves a title, and that pushed us over for a team title," Saari said.

Negaunee played Escanaba in a dual Sept. 21, but Alexis and Skylar were moved to No. 2 doubles for that meet, so Thursday was their first look at Escanaba's No. 3 doubles flight.

"It was kind of hard to get used to them, having never played them before," said Skylar. "We won the first set, and thought we could do it again," added Alexis. "It was just trying to keep calm and play smart. It was close, but it's not always fun to win a blowout. This was fun."

"Katy is a great player, and Angie has a ton of respect for her, but at the same time, Angie realizes that if she plays her game, she can be as good as anybody," Saari said. "She's a real level-headed player."

Hicks looked strong early on with a powerful serve that generated a handful of aces. Her net front ability was also evident, as Hicks frequently made Ring pay for soft lobs near the net.

"Katy definitely finishes them when you set them up at the service line," Ring said. "I wasn't on early on, but I just started making the game set to my pace instead of hers. I had to continue being consistent."

Ring's twin sister Allison also picked up a victory at No. 2 singles, as she defeated Escanaba's Hannah Beversluis 6-3, 6-2. The title was her first, while Angela won a title at No. 3 her sophomore year and at No. 2 her junior year.

"Today was the first time I've gone to a three-set match," Angela said. "Allison and I have never both won before."

Saari said he's enjoyed having the sisters as part of his singles lineup the last few seasons, and praised their quiet leadership.

"They don't say a lot on the court; they're pretty quiet, stone-faced through the entire match," he said. "It can be tough to get a read on them, but usually when you look at their score cards, they're in the lead, so you kind of just let them be."

The runner-up Eskymos put six flights in the finals, including all four doubles flights.

The unbeaten No. 1 doubles duo of Emily LaFave and Kayla VanPortfliet never seemed threatened in their final match as they defeated Negaunee's Lauren Anderson and Nicole Violetta 6-0, 6-3.

"It's bittersweet," said LaFave. "I'm so glad we won and went undefeated, and winning is so much better, but I'm sad that it's over."

"We never expected this, never," said VanPortfliet. "Kingsford and Negaunee were both great opponents in different ways, and if you get frustrated with them the first time, you have to come back and play them again. It just gets harder each time."

Taylor Gauthier also completed an undefeated run this season, capping it off with a U.P. title at No. 3 singles. Gauthier defeated Negaunee's Megan Syrjala 6-4, 6-4, ending a long a day for her. 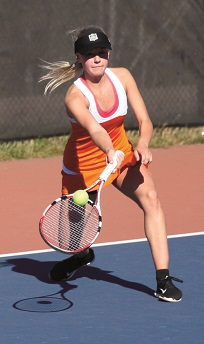 "I was pretty confident going in, but I was starting to get a little tired, so I was worried," Gauthier said. "It does feel great as a sophomore to get through unbeaten, and the fact that I pulled through being so tired, it feels great."

Escanaba coach Dennis Lueneberg praised the play of his No. 1 doubles flight from start to finish.

"In the summer, we didn't know if it would work because Kayla was a singles player," he said. "But we needed something to establish depth. Putting them together, they're friends, and you can see the chemistry click. It's not easy, but I don't think they've even lost a set. They're there every day working at it.

"I kept telling all the girls to keep working at it," Lueneberg added. "You don't want to have regrets. Maybe some do today, but I thought they played their hearts out. You can only do so much. They'll reflect on it, and learn."

Escanaba also won at No. 4 doubles. Menominee won the No. 2 doubles and No. 4 singles flights to take third. Gladstone's lone point came at No. 1 singles, when Paige Schwartz played in a semifinal match against Angela Ring. Ring won that match 6-3, 6-0.