The girls tennis team was the two-time reigning champion at the Upper Peninsula Division 1 Finals, and on Thursday, the Miners added another title.

Negaunee won four of the eight championship matches to take the overall victory with 16 points. Miners Lexi Peterson and Maci Aho won at No. 3 and No. 4 singles, respectively, while Negaunee took the No. 3 and No. 4 doubles title matches as well.

“There were some question marks coming into this year,” Negaunee coach Kyle Saari said. “We lost two good singles players with the Ring sisters. So we knew we had to replace a No. 1 and No. 2 and get some depth throughout the lineup.

“The thing about all these girls is that they all listen. Anything I tell them, they take it to heart. They attack it with 100 percent effort. They really bought it all year long that they were going to do their best on the last day, and it’s nice that they were rewarded for it.

“The success on both our girls and boys team is that you need solid athletes,” he added. “That’s the key. We are able to get good athletes and good kids as a whole.

“You let them do the work and guide them where you can in certain spots, and it becomes contagious. You get a group of leaders that can help develop the next group, and that’s something that we’ve been fortunate to have the last few years.”

In girls tennis, before this string of three straight titles, Negaunee had shared the title with Kingsford in 2012. Before that, the Miners hadn’t won a U.P. team championship since 1987 in Class C-D.

This fall, Peterson finished her season undefeated, while Aho got some revenge in the finale by defeating Escanaba’s Megan Marenger.

“This feels so great,” Peterson said. “I went undefeated, and to go from JV doubles to varsity and win is awesome. I’m really happy with my year, and I can’t wait to play again.”

“It’s my first year on varsity and I think I did well all around,” Aho said. “The girl I just played (Marenger) beat me during the season, and it was nice to pull it together and get her today and beat her.”

While Saari gave credit to his team for the Miners’ success, Peterson and Aho gave it to their coach.

“If Coach tells us we can fly, we’d be able to fly,” Peterson said. “We practice hard and have fun. We like being close together and make each other better.”

Kingsford and Menominee tied for second place with 10 points each. Katy Hicks won the Flivvers’ only title, taking the No. 1 singles championship, and coach Meagan Harrington was proud of how her cousin played.

“Katy did a great job today,” she said. “She is a really strong player, and she just came out and played her game. She just did great. I’m super proud of her as a senior for her winning GNC (Great Northern Conference) and U.P. this year. It’s great for her to go out that way.” 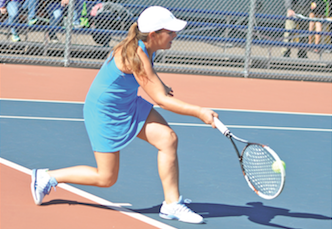 For Hicks, a U.P. title was a great way to wrap up her career with the Flivvers as she hopes to continue her career at the next level.

“I’m so happy,” she said. “My serves were really good today. It’s really exciting to end it this way. I came in hopeful, and it feels good to win in front of my family.”

The Maroons’ two titles came at Nos. 1 and 2 doubles with both finals victories coming over Kingsford. That wasn’t a surprise as Menominee coach Nickie Mathieu said that was her team’s strength all season.

“All three of them had a chance to win, and they are all very strong,” she said. “We were peaking at the right time. We started out slow, but I told the girls that it is time to peak at the end. They did what I asked.”

Escanaba and Gladstone tied for fourth with six points apiece. Escanaba’s lone win came at No. 2 singles as Taylor Gauthier defeated Marquette’s Elysa Olivier in two sets in the final.

“Taylor has had a good year,” Escanaba coach Denny Lueneburg said. “She has only lost twice this year, and she finished strong. She struggled a little bit earlier in the year, but she got through it and I think that helps. She was a lot calmer in the finals.”

“I thought I had a good chance to win today because I played Marquette before,” Gauthier said. “I get to a lot of balls that are hit short, so I think that helped me out a lot today.”

Gladstone’s best performance came from Andie Balenger, who lost in the No. 3 final to Peterson.

“Andie did well,” Braves coach Halley Reichel said. “She’s a freshman, so we’re happy that she made it that far. I think today she had some nerves she didn’t normally display, and it might’ve just been because she was in the championship. I’m excited to see her continue to get better, though.”

Marquette finished sixth with five points, and despite the lower team finish, coach Derek Sandstrom was content with how his team played.

“Elysa made it to the final today and that was the only girl that she lost to all year,” he said. “She’s had a really nice season in terms of consistency. She’s battled some freshman jitters, but most of the time, she’s been really consistent.

“I thought that Bethany (Wright) at No. 3 singles did well, and she made it to the semis. She had a tough draw last year, so I was happy to see her have some success today. No. 1 (Hannah Swajanen) and No. 4 (Lexi Anderson) singles also got a win for us, so that was nice as well.”