KINGSFORD — Sending six players into a championship round never hurts a tennis team.

Winning all six flights is even better.

They were followed by Marquette with 13, Escanaba eight, Menominee six, Gladstone four and Kingsford with three.

“You always want to play your best in the U.P. Finals and putting six in the finals puts you into a pretty good position,” said Negaunee coach Kyle Saari. “Winning all six matches is a by-product of having some depth. We were pushed in some matches. It was good to see the girls respond under pressure.”

The Miners swept doubles, with two flights going to a third set. Skylar and Lexi Taavila turned back Marquette’s Rachel Ely and Carly Sandstrom 7-5, 3-6, 6-1 in No. 2 doubles and Faith Toutant-Jillian Skewis outlasted Marquette’s Sydney Kivi-Campbell Kallio 6-2, 4-6, 6-4 at No. 4.

“Even though we lost the second set in each match, the girls showed some mental toughness by coming through,” said Saari. “They treated it like there was no pressure.”

Premo and Lorenzoni led 5-4 in the second set before Nelson and Kontio rallied for the win.

“Megan Syrjala is in a unique situation in that she’s part of four U.P. championship teams,” said Saari. “Even though Megan didn’t get to the finals today, she’s a big part of our program. We have a group of seven close-knit seniors. This is a group that will be missed.”

Syrjala reached the semifinals where she dropped a 7-5, 6-2 decision to Escanaba senior Taylor Gauthier.

“Taylor played very good today,” said Syrjala, who will enroll at Northern Michigan University next fall. “She hit a lot of short shots and made me run to the ball. It’s mentally draining to play somebody who’s that consistent.”
Wednesday’s championship also enabled the Miners to complete their second straight perfect season. 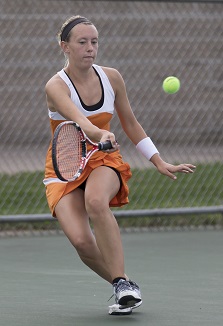 “To go undefeated two years in a row shows the depth of our team,” said Syrjala. “It just means so much to be part of four U.P. championship teams. A lot of it is mental toughness. Coach Saari does such a good job teaching us about mental toughness and none of this would be possible without God. I often find myself turning to Him (for guidance).”

Gauthier went on to clinch her third U.P. title with a 6-2, 6-0 triumph over Marquette senior Hannah Swajanen in No. 1 singles.

“I thought I played pretty well today, and the semifinal match was the best I ever played,” said Gauthier. “I especially felt good about how I played in the second set against Megan and felt pretty confident going into the finals. I split with Hannah in the regular season and knew she had a real good shot. I was really surprised by the margin of victory because she beat me pretty good the last time. I was nervous coming in here. It feels great to be a U.P. champion three years in a row.”

In No. 2 singles, Marquette sophomore Elyse Olivier captured her first U.P. title in a 6-3, 6-0 win over Escanaba senior Megan Marenger.

Olivier cruised to a 4-0 lead in the first set. Marenger then made things interesting by taking the next three points.

“(Marenger) is a good player,” said Olivier, who went undefeated this year. “She doesn’t give up, and I think that helped her against Negaunee (in a 6-4, 3-6, 7-5 victory over Jesse Sager). I kind of lost focus, then our coach (Derek Sandstrom) talked to me and helped settle me down.

"Our whole team is very supportive and my dad is my offseason coach. My older brother Alec (two-time U.P. champ) has also helped me out. I couldn’t have done this without them.”