NEGAUNEE – The last 12 months have been a roller coaster ride for the Negaunee girls tennis team.

Last fall, the Miners' dynasty in the Upper Peninsula came to an end at the hands of Marquette after collecting five straight Division 1 titles. Then, like every other tennis team in the state, Negaunee wondered if it would even get a chance at reclaiming its championship thanks to the uncertainty of the COVID-19 pandemic.

However, on Monday, everything fell into place and the Miners climbed back on top of the U.P. with another D1 championship. Negaunee won the Final with 21 points and took five of the eight flight championship matches, leading to a very pleased head coach Kyle Saari.

"I think we're most happy for the girls above anything else," Saari said. "It was a group that went through last year, and they were hungry. But I think it became a learning experience for many of them, and it's a close-knit senior group that I think also made sure to kind of take the juniors underneath their wing too.

"This group, they overcame a lot in spite of the COVID situation, and then they've had a lot thrown at them throughout the course of the year too. You're going to get everybody's best shot. As the year goes on, the more you win, the bigger the target gets. It was nice that they were able to respond on the last day." 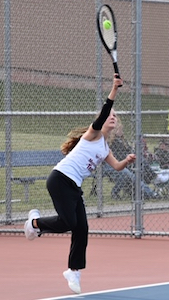 Lexi Mason (No. 3) and Annika Tervo (No. 4) gave the Miners two singles wins, and Negaunee also took three of the four doubles finals. Saari praised Mason, who finished off an impressive undefeated season, along with his No. 1 doubles team.

"Lexi ended up finishing the season off 19-0, and it's a really quiet 19-0," Saari said. "And it shouldn't be because she truly just lets her game kind of talk for her. She doesn't say much; she's quiet. So I'm tremendously proud of her and the effort she put forth.

“The other unique one is Morgan Carlson and Katelyn Lammi at one doubles. They went through all three of their years undefeated as a doubles team. They're good friends, and they're both good athletes. For them to end their careers 19-0 this year too, it's a unique mark to hit."

Menominee finished second with 14 points at what was supposed to be a seven-team meet, but Escanaba didn't compete. Jenna Nolde (No. 1 singles)  and Josie Hofer (No. 2) provided the Maroons' two individual championships.

"I'm proud of my girls," Menominee head coach Nikki Mathieu said. "My one and two singles, they busted their butts this year and they did awesome. I'm proud of them. They're great."

Westwood, which moved up a division after notching four straight Division 2 titles, was third with 10 points. Its lone championship came at No. 4 doubles.

Marquette (eight points), Gladstone (one) and Kingsford rounded out the standings.

PHOTOS: Negaunee’s Lexi Mason returns a volley during the No. 3 singles championship match Monday. (Middle) Menominee’s Josie Hofer serves during her title-clinching win at No. 2 singles. (Photos by Ryan Stieg.)