KALAMAZOO — A year ago, Charlie Kuchman and Sofia Manzo could not crack Birmingham Seaholm’s varsity lineup.

On Saturday, the duo’s three-set win at No. 4 doubles clinched the MHSAA Lower Peninsula Division 2 tennis team title for Seaholm, its first since 2015.

The Maples finished with 34 points, followed by Bloomfield Hills Marian with 27 and East Grand Rapids with 26.

“To win all four doubles says a lot,” Seaholm coach Casey Cullen said. “Five flight championships. Even where we lost, we fought hard.”

For the third-year coach, who played high school tennis at Seaholm, the title is extra special.

“In high school, I never won a team championship,” he said, adding, “I played at Western Michigan (University) so this is my backyard. It was meant to be.”

He said the team knew it had a chance at the title.

“They knew they had a good team; we knew we were something special,” he said. “The rankings would come out and they are No. 1 and they’re like, ‘Man, now we have a target on our back.’

“But they handled that really well. They continued to get better every day, and this is the result.”

Although Seaholm won five flights, the Maples did not have a player in the No. 1 singles final.

Teske’s first lead of the match was at 5-4 in the second set.

“I just had a moment of realization and I looked around with all my family and friends supporting me,” the top-seeded junior said. “I just thought whatever happens, happens.

“I know they’ll support me and love me no matter what if I win or lose.”

Weiss, the second seed, was coming off another tough three-setter in the semifinal, with a hard-fought 1-6, 6-2, 7-6 (3) win over Holly’s third-seeded Taylor Barrett.

Weiss qualified for the Finals but her Royal Oak team did not, leading her to figure she would not be seeded at all, let alone second. 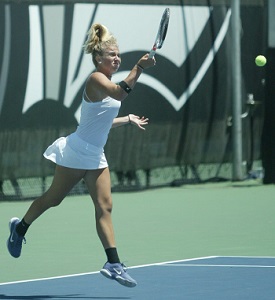 “We’re in a little lower flight in our region,” she said. “Our team works really hard and really good, but we just happen to be at a lower flight, and I didn’t think I’d be seeded at all.

“To be in the first singles seeds is an accomplishment in itself.”

Top-seeded Nicole Johnson of Holly ended her senior year with a 6-4, 6-4, win at No. 2 singles over Seaholm freshman Sofia Gryzenia, the second seed.

“This was my biggest goal for a long time,” said Johnson, who lost in the semifinals last year at the same flight.

“Being a senior didn’t matter. I have experience but she’s a very, very good player. I couldn’t have done it without (my team’s) support cheering me on.”

Gryzenia lost to Johnson earlier in the season.

“I think it makes me a little more nervous because I already think sometimes that I’m going to lose,” the freshman said.

“I think I just needed to keep more balls in against her because she has a really good backhand, so I tried to hit it to her forehand.”

At No. 3 singles, a pair of sophomores went against each other with second-seeded Halley Elliott of East Grand Rapids defeating fifth-seeded Marlo Hudson of Marian, 7-6 (5), 6-1.

“They both played such a great match,” Elliott said. “I wasn’t expecting an easy match, but we both gave it our all.”

Although Elliott defeated Hudson earlier in the season, “definitely going into the tournament, I had a little more confidence, but when I saw her play Seaholm, she played so well, I definitely had to adjust my plan a little bit,” Elliott said.

At No. 4 singles, another pair of sophomores faced each other with a very animated Greta Albertie, also of Seaholm, defeating top seed Yana Semerly of Okemos, 6-1, 6-1.

“Last year, I lost in quarterfinals to my best friend (Marian’s Gigi Kalabat),” Albertie said.  “I realized that you have to cheer for yourself. You are out on the court alone. You really have to support yourself, and that just really pushed me to win.”

Albertie not only had the crowd with her (“I’ve had like eight different teams cheering for me. I make friends with everyone,” she added) but the second seed was a dynamo on the court with fist pumps toward the crowd.

“Every single time I won a point, I screamed, ‘Yeah’ like that,” she said. “This was states, and I kinda just really stepped that up.”

While Albertie cheered for herself, she said her mother will not allow her to cheer for her twin sister — who plays No. 4 doubles for Marian.

“Me and my sister are close at home, but I just wanted to try something new and be different,” Emma Albertie said of choosing the all-girls school.

As for the cheering, “My mom does not let me cheer for my sister,” Greta Albertie said. “I can’t be down there. It’s that serious. Whenever I cheer for the other team, my sister will start losing really bad.

“I got like grounded because I did that. It was terrible.”

Kuchman and Manzo were stunned to learn they had the team title-winning match.

“This whole team depends on each other, and it’s going to fall to somebody, and we really wanted to make the lineup this year and we made it,” Kuchman said. “We’re really happy. It was worth it. All our hard work paid off.”

Kuchman, a sophomore, said their mindset heading into the third set was “it’s just like have fun because, honestly, nothing’s worth it if you can’t have fun. It’s the whole reason why I do tennis.

“I was trying to play to win before and it wasn’t working, but when I didn’t worry about it and tried to have fun, it was better,” Manzo said

The pair trailed 0-3 in the third set before turning things around.

“It was kind of hard,” said Manzo, a junior. “They were playing really well, and we were trying to figure out what to do differently because it’s hard when you’re in the finals and you’re down 0-3.

“I just looked at Charlie and said, ‘We have to get this.’

“We worked so hard for it. I think it’s more in your head, and our heads were in the right place.”

Cullen did not know at the time that his team had clinched the title but was not too surprised that Kuchman and Manzo did it.

“To win in their first year in the lineup says a lot about how hard they worked,” he said. “Obviously, it’s a team effort.

“They’ve been playing really well lately. They beat Midland Dow, which was undefeated, in the last week. So they were playing well at the right time.

“I was probably hardest on them because they had the most to learn being in the lineup. They totally took it and ran with it. It’s just awesome to see.”