A five-sport athlete, Ackerman also plays libero for the volleyball team during the fall, basketball and then softball and runs track in the spring. She was 13-0 on the tennis court this season, following a 13-0 junior year as a No. 2 singles champion and a 10-1 sophomore campaign where her only loss came in the U.P. Finals also at No. 2. She finished her four-year varsity career 42-7 playing no lower than No. 2, and did so while Munising played all of its matches on the road as it doesn’t have home courts. Her school, in Class D with just more than 200 students, plays tennis in the Great Northern Conference with the U.P.’s biggest schools, and she won the No. 1 singles league title as well. The Mustangs won two U.P. Finals team titles during her career, in 2015 and shared with Ishpeming Westwood in 2016.

Ackerman was followed in the singles lineup by twin sister Kelsea, and they’ve pushed each other to be better both in sports and in the classroom – the pair both have grade-point averages near 3.9. Marissa has an opportunity to play basketball at the college level but isn’t sure if she wants to continue in that sport or tennis. She’s also unsure what she’ll study after high school, although the medical field appears to be calling: her sister wants to be a nurse, her brother is studying physical therapy, her mom is a dietician at the local hospital and her dad is a nurse and director of the intensive care unit at the hospital in Marquette. Ackerman is interning at the hospital currently and considering becoming a physical therapist or athletic trainer.

Coach Rod Gendron said: “Marissa is one of the most competitive players I have coached. She plays to win and is all business on the court. Marissa knows when to play offensively, but understands how to use her extraordinary defense skills. To win a point against Marissa, you will need to hit several great shots, but that ball will keep coming back over and over. She literally wears opponents out mentally and physically. I admire how she can take a player’s strength away during a match. She forces players to over-hit, because they think they have to hit better and harder shots to win each point, which plays into her strategy. Marissa is athletic and agile on the court. She is a dual-sport athlete in the fall playing volleyball too. Plus, she starts on the basketball team, and runs track and plays softball in the spring.”

Performance Point: “During the finals, I knew it was going to be a hard match because last year the number one girl that played for us (Frankie Mattson) beat the girl I played (Iron River West Iron County’s Katarina Serbentas) for the finals, and she was pretty good so I was nervous about that,” Ackerman said. “I had a bye the first round and I had to get over playing against Ishpeming (in the semifinal), and I started off really slow and really nervous. Me losing that (second) set and going into a third set, it really showed me you have to work to get what you need to get done and that anybody can beat you if you’re having an off day. After I beat (Ishpeming) I was telling myself, ‘You need to step up your game and really get focused.’”

5-sport scholar: “You really have to be on your game whether it’s sports or school. On the buses a lot of us would be studying with each other or helping each other with homework. Definitely, homework is first and sports are second. We’d always have school and then practice, and then usually after practice my sister and me go home and study. We have a really busy day, but I really don’t like not doing anything, sitting around, and it keeps me active and always having something to do.” 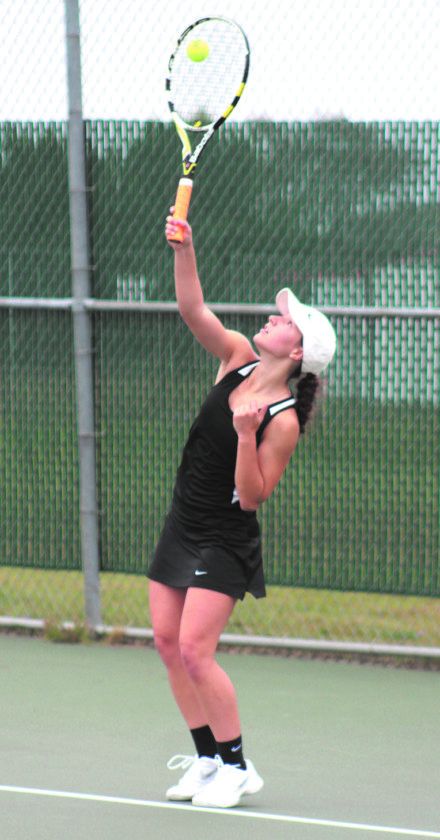 Sisterly assistance: “We get really competitive. I’m really defensive (in tennis) and she is very offensive, so she has a lot of winner shots on me. But there’s a lot of shots where she thinks she has a winner and somehow I get it back. She’s a great challenge to play with. We started tennis with my grandma (Munising assistant Claudia VanLandschoot) when we were at least 3 or 5, and it just stuck. Having somebody always there with you – and we always want to get better at whatever we’re doing whether it’s basketball, tennis, any sport that we play – we always compete to get better. And by pushing each other, we know we’re going to get better.”

Net gains: “I definitely see myself as very confident in volleyball and tennis, more so in tennis because it’s an individual sport. But for volleyball I play back row libero, so I have a huge part in our team and how we execute our plays. One bad pass could lead to not setting up our executions right. That same focus I have during tennis is always with me during volleyball, during matches.”

Good and bad of good-bye: “It’s really heart-breaking to see all the years of tennis just go by. It’s crazy how fast the whole season goes, and I’m really happy about the outcome and my team. But (having only volleyball left this fall) makes it easier on my body. I was super tired and exhausted and sore, and now I’m just sore in my legs from volleyball. … I’m happy I have more recovery time in my body, but at the same time I’m super sad tennis is over.”

PHOTOS: (Top) Munising's Marissa Ackerman returns a volley during a match against Gwinn this season. (Middle) Ackerman connects during her run to the No. 1 singles title at the Great Northern Conference tournament. (Photos by the Marquette Mining Journal.)