HOLLAND – Refuse to lose would be the perfect theme for this year’s Lower Peninsula Division 2 Finals as time after time players came from behind to claim victory.

East Grand Rapids players were involved in many of the comeback wins, and that proved critical in the Pioneers winning their first Finals championship since claiming the Division 3 title in 2009.

East Grand Rapids knew it would take a total team effort to defeat its longtime local rival, as Northern has won nine MHSAA championships since 2002.

“We know that Northern is always good,” said East Grand Rapids coach Mickey Mikesell. “We’ve known them for a long time. I know their coach and kids very well.

“This title feels real good for my girls. Since we’ve moved up to Division 2 we’ve had some tough luck with injuries and other things, so to get one feels great.”

Strong play in singles fueled East’s drive to the title. East Grand Rapids singles players won three of the four flights including with a pair of come-from-behind wins.

At No. 1 singles, sophomore Sloane Teske battled back from dropping the first set to defeat Mason senior Olivia Hanover 3-6, 6-1, 6-3. Teske knew the road to victory would be a difficult one, as she lost to Hanover in last year’s semifinals.

“I just shrugged off losing that first set and moved on,” Teske said. “(Hanover) played a great match, and she made me work real hard to beat here. I just stayed confident and wanted it more.”

“I’m so proud of our team and what we’ve done this year,” Teske said. “Everyone worked real hard for this.”

At No. 2 singles, top-seeded East Grand Rapids junior Hannah Stuursma played to form with a 6-0, 6-0 win against Kaitlyn Fox of Forest Hills Central. For Stuursma, her comeback involved battling back from injury. Stuursma battled back from a pair of foot surgeries during her sophomore season to win her first title this spring

“Coming off a foot injury, I was not very confident last year,” Stuursma said. “I was scared of hurting my foot again. This year my confidence level was so much higher. I’m really excited and real proud of how I played. I was pretty nervous, but I kept my confidence up.”

Stuursma’s title was the first of the day for the Pioneers.

“I’m so proud of our team this year,” Stuursma said. “Everyone really stepped up. We won so many big matches here, and I’m so proud of our team.”
Coming from behind was also the story for East Grand Rapids junior Audrey Olson at No. 3 singles. After dropping the first set 2-6 to Sema Colak of Okemos, Olson won the second set 6-2. In the third, Olson found herself trailing four games to one before rallying one more time to claim a 6-4 win and the title.

“This feels real great,” Olson said. “I started out down 2-6, and then I was down 1-4 in the third set. I had great support from my coaches and my teammates, and that made the difference. They told me to dig down deep, and I did.”

“It’s a real great feeling,” Zhang said. “I wanted to win it most for the team. To win another title my senior year is indescribable.”

Zhang was not the only member of her family to win a championship, as her younger sister, freshman Abby Zhang, was part of Northern’s No. 2 doubles team that claimed a title. Abby Zhang teamed with senior Salonee Marwaha to hold off the East Grand Rapids duo of Annie Meye and Alivia Vencelj 7-5, 6-3.

Being able to win with her younger sister made Felicia Zhang’s title even sweeter. 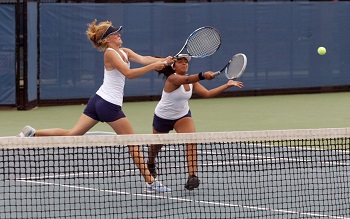 “She is a freshman, and this was our only chance to play with each other,” Felicia Zhang said. “It feels great.”

That feeling was shared by the younger Zhang.

“It feels great to win a state title my first time here,” Abby Zhang said. “It was also great to help send Salonee out with a state title in her last high school match.”

The doubles title was the second straight for Marwaha, who was part of Northern’s winning No. 3 doubles team last year. Like last season, Marwaha was paired up with a freshman.

Northern won three of the four doubles flights, and no pair of players displayed a determination to win as strong as Northern’s No. 1 team of Maansi Dalmia and Claire Tatman. Just getting to the finals was an exercise in determination as Dalmia and Tatman outlasted Birmingham Seaholm’s Layla Bellissimo and Emily Hirsch in a semifinals match that lasted more than three hours. In a match that saw two tiebreakers, Dalmia and Tatman came away with a 6-7 (7), 7-5, 7-3 (3) victory.

The semifinal win sent Dalmia and Tatman into the finals, where they went up against top-seeded Yana Beeker and Kristin McLintock of Traverse City Central. The Northern duo had more than enough energy remaining, as they claimed a 6-4, 6-4 win.

“It’s the best feeling in the world,” Tatman said.

“I’m at a loss for words,” Dalmia added.

The title was a repeat for Tatman who teamed up with Marwaha to win No. 3 doubles last season.

“The semifinal match was super close,” Dalmia said. “It was over three hours and had two tie breakers. We knew we had to dig deep down to pull it off. We just took it one point at a time. I don’t feel that tired now, but I know later I will feel it.”

Refusing to lose was key to the semifinal and final wins for the duo.

“You just have to power through it,” Tatman said. “We practiced hard all season, and we knew in the end that we could do it if we kept powering through.”

Coming from behind was also the theme of the No. 3 doubles match. Nele Geiger and Sydney McLean of Forest Hills Northern rallied for a 4-6, 6-4, 7-5 win against Lily Trinch and Brooke Forte of Birmingham Seaholm.