MASON – It is pretty rare for the No. 4 doubles tennis match to draw a large crowd – but that’s exactly what happened on Saturday at Mason High at the close of the Lower Peninsula Division 1 Finals.

And now the underclassman duo of Kamryn Dumas and Megan Blake of Holland West Ottawa have an entirely new band of “sisters” and fans in the Pioneers of Ann Arbor.

Dumas and Blake battled down to the bitter end and closely defeated the team of Grace Bickersteth/Ellie Alberts of Bloomfield Hills, 7-6, 3-6, 6-4, to win their first individual state championship.

“I think it’s so fun that even though we’re on different teams we can still come together and cheer for each other,” Blake said about the Pioneer team swarming the No. 4 doubles court afterwards. 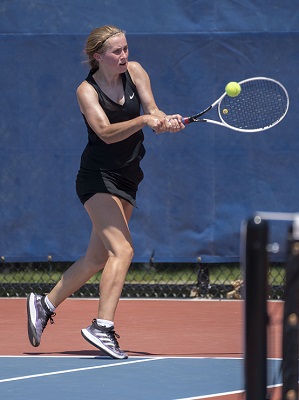 If Bloomfield Hills had won that last match, the Black Hawks would have earned the team championship outright.

“Our attitude was good today,” Blake added. “We just worked together, we came together between points to talk with each other and pull each other up.”

Dumas said representing their school and city – heck, their region too – was important.

“It’s kind of crazy out here,” she said about the fans’ reaction. “I think people don’t respect the west side (of the state) for tennis. The east side is like the dominant for sure, so it was nice to prove ourselves in that way – to have everyone believe in us, and that really strengthened us in the matches.”

Crowning team co-champions certainly seemed like the right ending to a season that wasn’t even certain to happen, after COVID-19 cancelled all 2020 spring sports. Both Pioneer and Bloomfield Hills have top-notch squads that also tied, 4-4, during the regular season in a head-to-head dual.

Pioneer totally dominated the singles flights this weekend, and Bloomfield Hills was powerful in doubles. Pioneer swept the singles championships with significant wins by Reese Miller (No. 1), Elsie Van Wieren (No. 2), Mia Goldstein (No. 3) and Bridgette Kelly (No. 4). All four came in as number one seeds, and all four went undefeated against Division 1 competition the entire season.

“I’ve been coaching for 30 years and I’ve had some of the finest players in the state, boys and girls. And I’ve never had a singles lineup like this, and who went through the season undefeated, and undefeated in such ways that you can’t imagine – so few games lost in the season,” said Pioneer coach Tom Pullen.  “Some of them lost fewer than 10 games the entire season. It’s just really astounding.”

Between those four players, during the final matches only Saturday, their game scores totaled 48-8.  Those wins gave the Pioneers an advantage of 30 team points to 27 over Bloomfield Hills, which soon after won the Nos. 1-3 doubles matches for the team championship tie.

“We had to battle today, and I couldn’t be happier (with the co-champs result),” said Bloomfield Hills coach Chris Dobson. “This was an epic performance by the girls. I think we were considered No. 2 all through the season, respectfully, to Pioneer. We had a decisive tie with them before (during the regular season) and frankly we felt co-No. 1 all through the season, so we feel this is a more appropriate (final result) and not as surprising as many others might feel.

“A championship is a championship; there’s no asterisk by it. Pioneer has a powerhouse lineup at singles like I’ve never seen. So, for what we had to do and how we had to battle, to share it with a phenomenal team, there certainly is no shame in that whatsoever.”

Hannah Tomina and Noa Goldstein won No. 1 doubles as the second seed at their flight, while Reagen Tomina and Carly Bernard at No. 2, and Eryn Stern and Natalie Raab at No. 3, entered as top seeds on the way to winning those championships. And Bickersteth and Alberts brought the team four points by reaching the No. 4 championship match, just as key with every point contributing to the eventual shared team title. 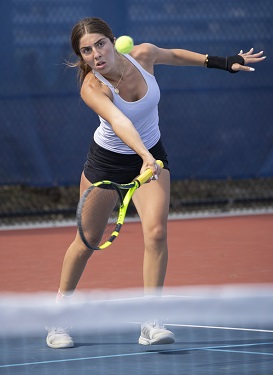 Mia Goldstein, a junior, is the Pioneers’ captain and looking forward to the future since none of the starting singles players graduate this year.

“I’m super proud of the girls this weekend,” she said as all the doubles matches were still underway. “I know we came in with pretty high expectations, being the No. 1 seeds all the way around. And I know my girls are all fighters, so I knew that even if we were having an off day, we could compete our hearts out.

“I think it’s pretty crazy that we swept singles. I don’t know if it’s ever happened before, but I’m just really proud of everyone and the team spirit we had today.”

Miller, a sophomore, expressed one regret that was out of her control last spring. She didn’t get to play on the team with her older sister, Karina, who graduated in 2020 and now plays tennis at Michigan.

“Having watched my sister play all through high school, I felt pretty confident knowing what to do out here,” she said. “I was pretty confident in everyone coming in, since we’re the No. 1 seeds, we were all undefeated except two losses I had to a really great player (Detroit Country Day’s Julia Fliegner) in another Division (3). That confidence helped all of us, and we all felt that ‘we got this, we know we can do it.’ But I knew we’d still have some tough matches. Everyone (at states) is good.

“My finals opponent (Zoe Angell, Midland Dow) is really good, and our matches this season have been much closer than the final scores indicated. But I was excited. I’ve never played in states before because of last year getting canceled.”