KALAMAZOO — For the second year in a row, the top two teams battled for the MHSAA Lower Peninsula Division I girls tennis championship. But this time, Ann Arbor Pioneer did not have to share the title.

Pioneer, which led by a point after Thursday’s matches through the quarterfinals, held on for the win with 33 points at Kalamazoo College’s Stowe Stadium on Friday.

Bloomfield Hills finished second with 32, Troy was third with 22, Midland Dow fourth with 15 and Novi fifth with 14.

In a match of flights, Pioneer swept the singles and Bloomfield Hills swept the doubles.

“To sweep the doubles, I don’t know the last time it’s been done in Division 1 – but it’s an incredible task,” Black Hawks coach Chris Dobson said.

“We came here hoping to win the tournament outright, and it just didn’t happen. Honestly, I couldn’t be happier the way the girls played.”

She and sophomore Ella Vogel lost to Bloomfield Hills seniors Eryn Stern and Grace Bickersteth, 6-3, 6-0, at No. 3 doubles.

“Aditi Ganesan is the story of the tournament for me,” Pullen said.

Ganesan explained: “I just got over being sick and I hadn’t touched a tennis ball in over a week. We were afraid I was going to pass out in the first round (Thursday).”

Pullen said he hoped she would get at least through the first round for the two points, but “she got all the way to the finals.

“If she hadn’t, then we lose. That was really a gutsy performance.”

Vogel said three days before the tournament, she was waiting to see which alternate would be her partner.

“Then two days ago, they said Aditi can play, so I was really happy,” Vogel noted. “She’s done so well, and I’m so proud of her.”

Stern and Bickersteth started the season with different partners but jelled once they were paired. 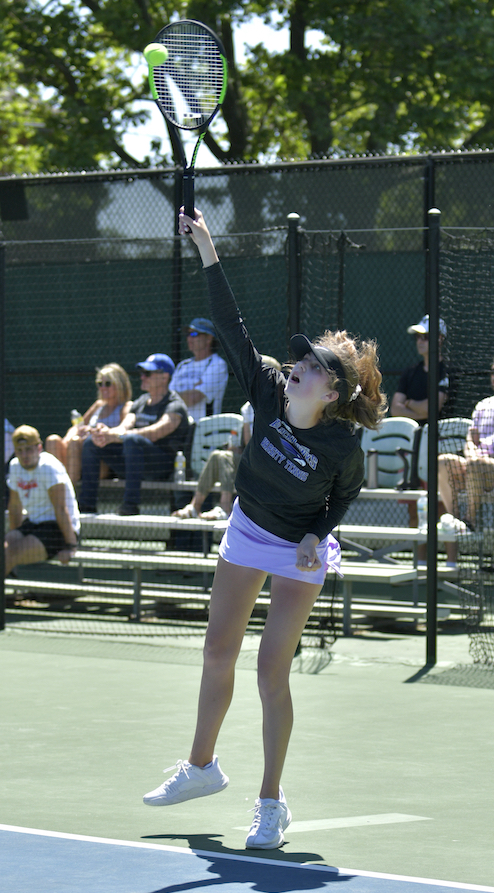 “I’m good at the baseline and she’s amazing at the net, so that works really well,” Stern said. “We’re seniors, so it’s a great way to go out.”

Bickersteth said after losing in the Finals last year, “It felt good to come out and play my game and prove myself this year. We were undefeated this whole season.”

Pullen said these nail-biting tournaments are not necessarily his favorite.

“This is my 62nd time to the state (boys and girls) so I’ve been through a lot of stress and a lot of exciting situations, and this one was so rewarding,” he said.

“I’m proud of these girls.”

“My first two matches (Thursday) I was pretty nervous for both of them,” said Miller, who has already committed to play tennis at University of Michigan, where her sister Karina just finished her sophomore season. “I had a lot of expectations for myself, definitely more than last year.”

Rochester Adams did not qualify as a team, but Fu’s teammates showed up in full force to cheer her on.

“They made a bunch of posters, so it was really welcoming and fun,” she said.

Playing in her first MHSAA Tournament, Fu said, “When I first came here, I just hoped I would play well.

“I think high school tennis is nice to have a coach with you and you have a team with you. It’s a lot of fun.”

“Last year was the highlight of the year, being a state champ, so I knew that feeling,” Van Wieren said, adding this year was even sweeter. “Coming out this year, there’s more pressure but it’s such a great atmosphere.”

“She’s a great player,” Leiti said. “She hits hard. She got all the shots. Her footwork is phenomenal.

This year, “I like to think that keeping my cool helps. I try not to let the fluctuating emotions get to me too much. I tried to keep my feet moving.”

Midland coach Garrett Turner said although Leiti lost, by making it to the finals she earned that one special point that put Midland Dow all by itself in fourth place after tying for fourth last year.

“It’s fun to be able to have someone here through the long haul and have the team stay the whole time to cheer for her and see what it’s like to play in the finals,” Turner said.

“This is a pretty special year because we came in as the eighth-ranked team. We outperformed significantly from where we were slated to be.”

“Every game was pretty close,” Goldstein said. “With her game style, she doesn’t miss a lot and she hits the ball with a lot of spin, not a lot of pace, so I had to generate all the power myself. I think I was exerting a lot of energy.”

Shaya said since it was her last competitive match ever, “I said to myself I was just going to play every point like my life depended on it. I wanted to give it every single thing I had.”

A pair of sophomores toughed out a grueling match at No. 4 singles, with Bridgette Kelly defeating Julia Yousif, also of Bloomfield Hills, 6-4, 2-6, 6-3. 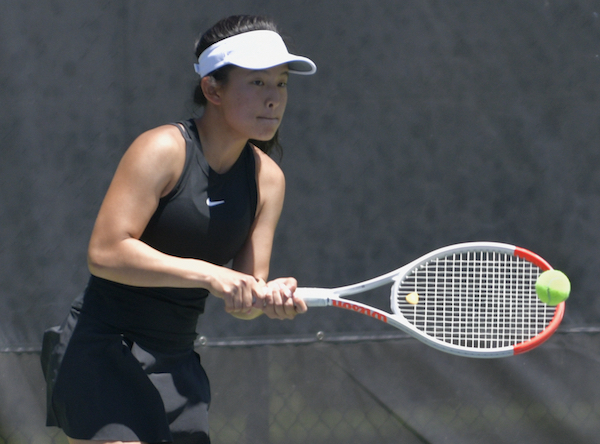 “It’s really great,” Kelly said. “I was pretty confident going into the third set. I knew what I had to do: make balls and play my tennis.”

Yousif said she just kept believing in herself and fought to the end.

“I just tried to pump myself up and keep the energy,” she said. “She was playing better (in the third set) so more credit to her.”

At No. 1 doubles, Bloomfield Hills senior Danielle Herb said losing was not an option for her and fellow senior Carly Bernard.

Their key to winning is “our communication,” Herb said. “I was a singles player (last year) going on to dubs. It was a big transition. We stayed positive and we fought.”

The exuberant Bernard added, “We turned it on at the right time. My feet feel better now.

”We just love each other. And I’m crazy in the head and she knows how to calm me down.”

“Winning twice in a row is pretty awesome,” Goldstein said. “It’s really great winning as a senior. I really wanted this this year.”

Raab said her specialty is at the net.

“I love playing net,” she said. “I love to crush the ball. I’m the person who likes to attack people — not personally,” she quickly added, laughing.

“Noa has an amazing ground-stroke game, and her serves set me up, We always have fun and have good energy.”

For Pettengill, celebrating her first individual title, “It was definitely overwhelming, but it’s so nice to be here with the rest of the team.”

“She’s the ground-stroker, and I’m the volleyer,” she said. “She always hits her targets, and I hit mine. It just works perfectly.

“We’re so pumped up the whole time. Last year, I lost in finals. And this is my senior year, so it’s huge for me.”

PHOTOS (Top) Ann Arbor Pioneer’s Bridgette Kelly sends back a shot at No. 3 singles Friday at Kalamazoo College. (Middle) Bloomfield Hills' Colleen Pettengill returns a volley during a No. 4 doubles match. (Below) Troy's Sophie Chong keeps a volley going during her No. 2 doubles match. (Click for more from High School Sports Scene.)