“They all said they wanted to work hard, put in the effort,” Bandrowski said.

The results have been impressive. The Gladiators swept all eight flights in the Lake Michigan Conference championships, the MHSAA Division 4 Regional and enter next weekend’s Lower Peninsula Finals ranked No. 1 in their division in the state coaches’ poll. St. Francis, which finished second in Division 4 last season, did not lose a set in Regional play.

“We’ve been pushing them, and they’ve responded,” Bandrowski said.

Bandrowski is in his first season as the head coach. He previously coached in the middle school program, and later as an assistant to varsity coach Jeff Hughes. Bandrowski is also the head coach of the boys program, which has finished third in Division 4 the last two falls.

“He really has the tennis programs rolling, and he’s doing it the right way – from the middle school on up,” said Tom Hardy, the school’s athletic director.

Statewide, Hardy said, the trend is just the opposite. He said the number of Division 4 schools dropping tennis because of low numbers is “amazing.”

“The ones that are succeeding are because of the coach,” he said.

Hardy said when he coached boys tennis nearly 10 years ago “we were trying to pull kids out of the hallways to have 12 to have a team.”

But it runs deeper than the high school level.

“We have around 900 kids in our entire school system,” Bandrowski said, “and 240 are playing tennis at some level. That’s almost 25 percent. That’s pretty exciting. If you catch them early, develop that bug (for tennis), then you can build a long term program.”

“We had 300 kids from our school there during (parts of) the day watching and cheering,” Bandrowski said. “I’m a huge advocate for making it fun. We had free hot dogs, chips, water. It was like a carnival. Kids notice that kind of environment. They think, ‘Man, this is like football. This is a lot of fun.’ If you can make it interesting, exciting and fun, and let them cheer, all of a sudden it’s an in-thing to do.”

Of course, it helps to put a good team on the courts to keep spectators interested.

“A lot of people told my dad afterwards they were surprised tennis was so intense and fun to watch,” said Amanda Bandrowski, the Gladiators’ No. 1 singles player. “My dad was probably saying to himself, ‘Told you so.’”

Amanda Bandrowski is the reigning Division 4 champion at No. 1 singles. She’s 30-2 this spring.

“Amanda is a real dedicated tennis player,” Paul Bandrowski said. “She loves playing the game, teaching the game. Tennis is her life.”

“I don’t do too much else,” she said with a laugh.

Defending her title will not be easy as the No. 1 singles flight is loaded. The field includes Kalamazoo Hackett’s Kate Ketels, who handed Bandrowski one of her two losses this spring, and last year’s runner-up Jeanne Nash of Bloomfield Hills Academy of the Sacred Heart. 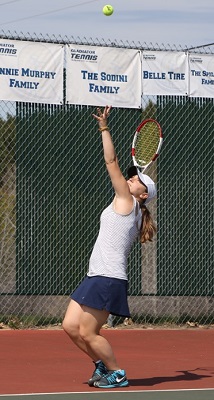 The doubles lineup has provided a nice balance. Carlee McCardel, an all-state skier, and Jenna Tomczak are 31-3 at No. 1 doubles. McCardel reached the career 100-win mark in the Regional, joining teammates Amanda Bandrowski and Wilson in the century club. Bethany Richey-Margaret Sutherland (24-3), Nicole Ehardt-Camille Madion (29-4) and Dee Ehardt-Maddie Muzljakovich (16-9) add to the team’s strength. First-year players Dee Ehardt and Muzljakovich have come on strong, winning their last 11 matches, Paul Bandrowski said. Dee and Nicole Ehardt were on the school’s Class C Semifinal volleyball squad in the fall. Bandrowski has nine volleyball players competing in tennis.

“You take a girl that’s a great volleyball player and they learn overheads quickly, they learn how to serve quickly,” Bandrowski said. “They have that hand-eye coordination. They know how to bounce, how to move. I’m always looking for that next athlete.”

As a team, St. Francis is 11-0-1 against some of the top Division 4 squads in the state. The Gladiators tied Hackett 4-4 and edged last year’s champion, Bloomfield Hills Academy of the Sacred Heart, 5-3. Those three teams will likely battle it out for the crown.

“It will be tough, but we definitely have shot at winning the state championship,” Amanda Bandrowski said.

“Hackett has a great team, so does Sacred Heart,” he said. “It’s going to be a battle.

“Our attitude right now is this: We can win if we play our best tennis and put all of our energy into it (leading up to the finals). We’re going there (Kalamazoo College) to try and win. If we don’t, at least we’ll know we left it all on the court.”

It’s been quite a first season for Bandrowski, but he’s quick to praise Hughes, whose last three teams had consecutive top-three finishes at the MHSAA Finals.

“Jeff built a great program,” Bandrowski said. “He’s a great guy with a great personality. He helped these girls enjoy tennis. I definitely go on the back of the people who have come before me – Annie Murphy (previous boys coach) and Jeff. Building a successful program doesn’t happen overnight.”

Hardy said Bandrowski has been the perfect successor to Hughes. And with the feeder programs flourishing, Hardy expects the success to continue. More importantly, though, he appreciates the way it is being achieved.

“We get more compliments (about the tennis program),” he said. “People (that are involved) are enthusiastic about it. It’s a fun, safe environment for kids so they (parents and kids) are going to be drawn to it.”

The tennis team is looking to put an exclamation point on what’s been an incredible sports year at St. Francis, especially for the girls. The cross country and co-op downhill ski teams won MHSAA titles. The basketball team reached the Class C Final, the volleyball team the Semifinals. The track & field team just won its fifth consecutive Regional while softball is 23-9 and co-op soccer 7-6-2.

The boys are doing well, too. The football team went 12-1 and reached the Division 6 Semifinals, the co-op ski team placed second in Division 2, the tennis team took third in Division 4, the basketball team won a District, the track & field team just captured a Regional, and the golf and baseball teams won conference crowns Monday.

The success has been so prevalent that this year’s yearbook theme is “The Year of SF.”

“All of our sports teams have done incredibly well, so much better than anybody would have expected,” Amanda Bandrowski said. “It’s really exciting to be part of it.”

What excites Hardy is that it’s been shared by so many.

“So out of the 340 kids at the high school we have nearly 320 participating in at least one sport. That’s unreal.”

So is the success.