It was the fourth Lower Peninsula Division 4 title in five years for the Gazelles.

“We’ve been chasing Traverse City all season,” Sacred Heart coach Judy Hehs said. “We lost to them in a dual meet early.

“We had to elevate our game in order to compete with them.”

Hackett, which earned just one point at last year’s MHSAA Final, had winners at No. 1 singles (senior Kate Ketels), No. 2 singles (sophomore Natalie Moyer) and No. 4 doubles (juniors Kelsie Stewart and Maggie Wilson).

Getting so close to the title but losing was hard, St. Francis coach Paul Bandrowski said.

“One point, that is tough, but you can’t second guess,” he said. “We had a player that was injured and had to be replaced at 3 doubles.

“We had some three-setters that came down to the last seconds. We did really well. You can’t get much closer than that. We had at least one state champ in Rosie (Wilson).”

Although she played high school tennis as a freshman, Ketels instead played USTA tournaments the last two years.

Coming back to high school tennis, “It was definitely worth it,” said Ketels, who pulled out a tough 3-6, 6-2, 6-3 win over Kalamazoo Christian senior Lizzie Bauss for the No. 1 singles title.

“It was an awesome team. A lot of us are friends off the court, so we had a really good dynamic. It makes me more excited to go to Gonzaga (in the fall). Being on a team is a lot more fun; it’s a lot more rewarding.”

After dropping the first set, Ketels, the top seed, regrouped.

“Lizzie came out and played really well,” she said. “I was surprised to see that. I knew I had to play better if I wanted to win.

“My teammates really helped me a lot. Everyone was like ‘Come on Kate, you can do it.’ I don’t think I would have won if they weren’t there.

With their schools in the same conference, the two played each other five times this season with Ketels winning all five.

“Kate and I have grown up playing tennis in the same city all our lives, and we actually did not play each other until this year,” said Bauss, the second seed who will play tennis at Indiana Wesleyan in the fall.

“In the first set, I had a good set and she never really let down. She’s a tough player. I was getting a little tired and tried to keep going.”

“When you drop a girl the caliber of Kate Ketels at the top of your lineup, it moves everybody else down and that, in itself, is a pretty big deal,” he said.

“She came out with different strategies this time and caught me off guard (in the first set), but I got it back,” said Moyer, who played No. 1 singles last year, earning the team’s only championship meet point.

Playing on the court next to Ketels helped, she said.

“We like to motivate each other,” Moyer said. “We look at each other and like, ‘Let’s go.’ Then we’ll pump each other up.”

The Hackett players were easy to spot around the stadium with their bright pink hats, even though their school colors are green and white.

“Last year, we wondered what we could do about hats, what will set us apart from everyone and give us our own little thing,” Moyer said. “We said pink looks pretty good with green and white, and everyone knows us as the Pink Hats now.”

“(Natalie’s) a very strong player, but I think I had a pretty good first set today,” Bouma said. “I played pretty hard. It was a good match.”

She said the key to their team’s success is, “Everyone really encourages each other to do their best, and we have some great coaches that put in a ton of time. Our team has a really positive attitude.”

Although Sacred Heart’s Elizabeth Etterbeek was the sixth seed at No. 2, she lost to Bouma in the semifinals, giving her team an unexpected point.

At No. 4, Sacred Heart’s Victoria Shahnazany was seeded fourth and lost to St. Francis senior Rosie Wilson, 7-5, 6-3, in the final, earning another unexpected point.

Shahnazany said she has played Wilson, the third seed, before and knew what to expect.

“It’s been fun playing Rosie throughout the season,” the sophomore said. “She’s great competition, and I’m glad I had the chance to play her at states.

“I think I could have played better today, but I tried my best on the court and that’s what matters.”

Wilson said they have had some tough matches against each other.

“I knew this would be tough because we played each other twice already,” Wilson said. “I won both, but they were very close. I just knew it was going to be tough, but I had to keep going.” 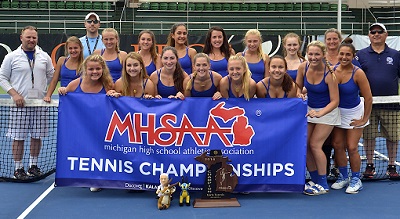 “I couldn’t find my rhythm at first, and it’s something most tennis players struggle with,” Fuchs said. “After a while I started seeing how she worked. After that, it was good.”

Bandrowski recovered from a medical timeout in the third set to win her semifinal match.

In the semifinal, “My dad (who is the coach) gave me a pep talk and just told me to forget the last two sets and put it all out there,” to defeat Hackett sophomore Maggie Ketels, 6-4, 5-7, 6-1.

In the final, “I don’t think I played as well, but she was better, I think,” Bandrowski said. “She made a lot more balls.”

“When you come to a venue like this, we (Sacred Heart) needed Jackson Lumen Christi to win that one doubles match,” Hehs said. “That was a swing point.”

“In the third set, “We just ran with our momentum, and it just took us.”

Although this is their first year as doubles partners, “We work together, we always talk, we always stay up and we always communicate,” Reynolds said.

Both Gazelles played singles last year and had a bit of a hard time adjusting to doubles.

Hildebrand said the two take different styles to their matches.
“She’s really good at the net and I’m better back,” she said. “That really worked out well for us this year and helped us today.”

Flannery started the season on the junior varsity but stepped up when junior Camille Madion was injured.

Paul Bandrowski said: “AJ Flannery is a new player that started this year, played just a few matches. She got all the way to the finals, which was terrific.

”Camille was wonderful, She cheered the entire time, she gave 100 percent of her encouragement to the team and we really wanted to win it for her, too.”

“We kept a positive energy the whole time,” Wilson said. “I don’t think we were pumped up enough for it (in the first set). I don’t think we had the right mindset, energy to really grind it out.

In the second set, “We talked to each other, talked to our coach Lizzie (Oosterbaan) and got really pumped up. We got a positive mindset and just grinded it out. (Winning the title) is even better than we thought.”

Stewart said their friendship extends off the court.

PHOTOS: (Top) Kalamazoo Hackett's Katie Ketels returns a shot during her run to the No. 1 singles championship at Kalamazoo College. (Middle) Bloomfield Hills Academy of the Sacred Heart repeated as LP Division 4 champion. (Click to see more from HighSchoolSportsScene.com.)