HOLLAND – The Bloomfield Hills Academy of the Sacred Heart girls tennis team utilized a familiar formula as it turned in another title-winning effort at the MHSAA Lower Peninsula Division 4 Final in Holland this weekend.

Following the same blueprint it used in winning the title in 2013, Sacred Heart won its third in the past four years. The Gazelles swept all four doubles flights and also won the title at No. 4 singles.

“We stress that every point matters,” Sacred Heart coach Judy Hehs said. “The points at first singles count just as much as the points at four doubles. Two years ago we won it the same way. We won all the doubles matches and also won at No. 4 singles. That has worked out well for us.”

Senior Teresa Walawender won the lone individual title for Sacred Heart. Seeded second at No. 4 singles, she defeated Anne Bandrowski of Traverse City St. Francis 6-4, 6-3, to win the title. It was her first individual title, while the team title was the third during her career.

Walawender also provided the Gazelles with leadership this year as one of the team’s captains.

“I’m a captain this year, and it’s even more special,” Walawender said. “This year I had to provide leadership for the team. We are a real close team, and we all support each other.”

While Academy of the Sacred Heart had won two of the previous three LP Division 4 titles, this year’s was no sure thing as the team suffered heavy graduation losses from a squad that placed sixth last season.

“We have six first-year players in the starting lineup,” Hehs said. “We have four freshmen and two transfer juniors. It took us a while to figure things out. It’s been a journey.”

The journey also had a number of obstacles. One hit the doubles lineup when Meghan Carroll suffered an injury at No. 4 at the end of the regular season. Sacred Heart responded by moving senior Sarah Panone into the lineup at No. 4 doubles with Stella Betrus. The combination clicked as Betrus and Panone won the Division 4 title at No. 4 doubles with a 6-2, 6-2 win against Ann Arbor Gabriel Richard.

“We only started playing together at the end of the season,” Betrus said. “My partner (Carroll) hurt her foot and Sarah stepped in for her. It ended up working out great.”

“I think we meshed real well,” Panone said. “I’ve played one doubles and three singles. I play wherever I’m needed. This feels great.”

At No. 3 doubles, the Sacred Heart team of Tate Lehmann and Kathryn Monahan made their No. 1 seed hold up as they defeated Kalamazoo Christian 6-3, 6-2 in the final. 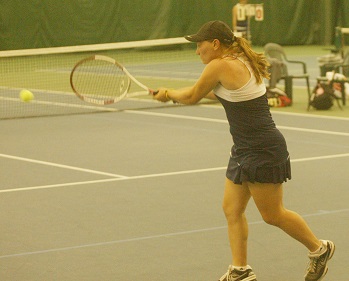 “I thought we played our best tennis at this tournament,” said Lehmann, a junior. “I think we meshed real well as a team. We have the same type of personality, and it worked out well.”

For Monahan, a freshman, it was her first MHSAA Finals experience.

“It was pretty cool,” Monahan said. “Hopefully we can do it again next year.”

Academy of the Sacred Heart made it a clean sweep as it won the title at both No. 1 and No. 2 doubles. At No. 1 doubles, Selina Fuchs and Abby Hildebrand defeated Ludington in two sets.

At No. 2, Sara Gerard and Kendall Gassman took the title with a three-set win against Ludington.

At No. 1 singles, Traverse City St. Francis junior Amanda Bandrowski broke through after a pair of final four appearances in her first two trips to the Finals. Bandrowski, who came in seeded third, defeated top-seeded Jeanne Nash of Sacred Heart 6-4, 6-4 in the title match at No. 1 singles.

“The past two years I lost in the semifinals,” Bandrowski said. “To win the title this time is great.”

Bandrowski had to be versatile to adapt to changing conditions as she twice had matches start outdoors but move indoors due to rain.

“I think I play better indoors anyway,” Bandrowski said. “I just had to be patient and wait for my opportunities. I stayed patient and made her miss. All of my matches were tough so I just had to stay focused and patient.”

Kalamazoo Christian junior Audrey Bouma was another player who had to stay patient and focused. Bouma needed three sets to hold off Bailey Chouinard of Traverse City St. Francis at No. 2 singles. Bouma was up 4-1 and 5-2 in the second set before Chouinard battled back to force a third.

“I think I started to let up at the end of the second set,” Bouma said. “In the third set I got my focus back. I started to focus on playing myself and hitting the ball and not focus on my opponent. My swing started to get faster and I didn’t let up.”

“My freshman year I won the title in a match that was very similar,” Bouma said. “I won the first set but then lost the second one before coming back to win it in the third set.”

“It was a real close match and I thought it was going to go to a third set,” Friedman said.

For Friedman, who has been playing tennis for seven years, it was her first trip to the MHSAA Finals.

PHOTOS: (Top) Teresa Walawender of Bloomfield Hills Academy of the Sacred Heart returns a shot during Saturday's LP Division 4 Final at No. 4 singles. (Middle) Traverse City St. Francis' Amanda Bandrowski plays for the championship at No. 1 singles; she won in two sets. (Click to see more from HighSchoolSportsScene.com).