KALAMAZOO — By the end of play Friday, Bloomfield Hills Academy of the Sacred Heart had already repeated as the Lower Peninsula Division 4 team champion, but don't ask any of the girls how that felt.

The coaches did not mention it until Saturday at Kalamazoo College’s Stowe Stadium.

“We didn’t find out until just now,” No. 1 doubles champ Annie Keating said after her Saturday final. “We assumed, but no one really knew. We just went out and played our best.”

Sacred Heart, with the top seeds in every doubles flight, swept those four. But the match of the tournament was the No. 1 singles final.

The barnburner was the last match on the court, with the crowd inside the Markin Racquet Center sending deafening cheers after each point, especially during the third set.

“We played during the regular season, and she beat me both times,” McNalley said. “Today, I just tried to get everything back and not get mad.

“Last time, I was getting upset at myself, so I was trying not to do that this time and just keep playing.”

Playing in her first MHSAA tournament, “I had no clue if it was going to be good or bad,” she said. “It was good, definitely.

“Since it’s my last match of the season, I was giving it my all.”

With the doubles semifinals played on Friday because of the projected rain the next day, Sacred Heart’s four semis points clinched the title. They ended with 31 points, eight more than runner-up Monroe St. Mary Catholic Central.

“We knew (Friday) we couldn’t catch Sacred Heart but the kids have been motivated all year, so there was no problem getting them motivated to play,” St. Mary coach Wayne Asher said.

“Grosse Ile was right there with us, and there were a couple other schools not too far away also.”

Grosse Ile, which moved from Division 3 this year, finished third with 21 points, North Muskegon (17) was fourth and Everest (16) fifth.

Sacred Heart’s sixth title in eight seasons is bittersweet for coach Judy Hehs, who is leaving the school at the end of the year.

“In their hearts they decided in March they were going to win a state championship,” Hehs said. “We had several kids make sacrifices about where they played, with whom they played, in order to get here.

“They, as a team, made that decision to work to that goal.”

Each doubles team had at least one past Finals champ in the pairing to mentor the younger players, Hehs said.

Keating, a junior, said losing their coach gave she and her teammates motivation.

“She’s the best coach we’ve ever had,” she said. “We really wanted to win this one for her. That was our motivation.” 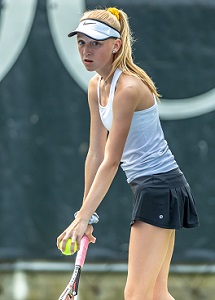 Beatty won the title at No. 3 singles last year but wanted to play doubles with Keating, her cousin.

“The biggest adjustment was mostly working with a partner and it was nice having my cousin, which was amazing,” Beatty said.

Playing with her cousin has advantages.

“We can communicate with each other without having to talk,” Beatty said. “We just look at each other, and we know.”

It was the second No. 2 doubles title for Crosnier.

“It feels good, but it’s also nerve-wracking because there are high expectations,” she said. “We really wanted the title.”

Nafso was happy for the mentoring.

“I have a lot of nerves so she calms me down a lot,” Nafso said of her partner. “When we’re on the court, we really like to laugh and smile and be friends with our opponents.

“We’ve been spending every single day together trying to prepare for states.”

The friendliness extended to the final.

“I was surprised at No. 2 doubles,” Hehs said. “They spent more time at the net at the end of the match, where we wanted to congratulate them.

“They were enjoying the company of their opponents, discovering where they were going to college and stuff like that.”

Junior Kate Myers and senior Serena Seneker won the title at No. 3 doubles, and senior Catherine Blumberg and junior Hannah Kakos won at No. 4.

“I played (Gladstone) at Regional, and then hearing about her big upset I was like she must have improved a lot in the last couple weeks,” Schutt said. “I was really nervous.

“I was just hitting it deep, keeping at it, not letting her in.”

Gladstone said she ended her senior season “just playing my heart out.

“It’s my last year, and I just wanted to give it my all and just battle. My coach said, ‘Imagine, believe, achieve’ and I just used that.”

The senior said she had a mental adjustment after Regionals.

“I was a very timid player and I would just try to get the ball back, and now I was more on the offensive and just hit my shots,” she said.

After losing in the final at No. 3 last year, “I learned to stay steady and always be consistent and don’t try to hit a hard shot and always just stay steady because that’s how you win points,” Kennedy said.

“I learned not to get in my own head. Last year, I would always get mad at myself and get down, but this year I learned just to get the ball in and do my thing and play my game.”

Despite being tucked back on Court 4 at the Markin Center, the farthest from the bleachers, Sheets said she had no problem hearing the crowd.

“I think I have a pretty good mental game, but (the crowd) just helps you think about what the reward is if you get through it,” she said.

It was especially rewarding for the senior Saturday.

“In past years, I never made it past the quarterfinals,” she said.

“My mental game has improved. I’m a very relaxed player and never get mad at myself, so I think that’s definitely my strongest thing.”

PHOTOS: (Top) Bloomfield Hills Academy of the Sacred Heart’s Isabelle Burg lines up to return a volley during a Friday match at No. 2 singles. (Middle) Clarkston Everest Collegiate’s Moorea McNalley prepares to serve on the way to winning the No. 1 singles title this weekend. (Click for more from HighSchoolSportsScene.com.)