KINGSFORD — The West Iron County girls couldn’t have had a better ending to their tennis season Thursday as they earned their first Upper Peninsula Division 2 championship since 2006.

West Iron scored 13 points, followed by Munising with 12, Iron Mountain 11, Ishpeming nine, Gwinn five, and Norway and Ironwood with one apiece. The Wykons had finished runners-up the last three seasons.

Junior Kali Applin secured the title by taking a 6-4, 2-6, 6-2 decision from Iron Mountain senior Arianna Morel at No. 2 singles on a chilly and windy day.

“It was a good match,” said Applin. “Coach (Joe Serbentas) told me we could share the title or be selfish and win it for ourselves. This is a big accomplishment for our team, and it feels great to win it for myself and the team. Dropping the second set was kind of a letdown, but I just tried to stay calm and play one point at a time.”

West Iron senior Tori Bociek became a four-time U.P. champion as she teamed with junior Madison Berutti in a 6-2, 6-1 victory over Iron Mountain sophomore Aziza Burgoon and junior Bella Brown in No. 1 doubles.

“It feels great to be a four-time U.P. champion,” said Bociek, who will be attending classes at Northern Michigan University next fall. “I was confident coming in, knowing we had beaten every team here pretty easily during the regular season. The season went real well. We improved a lot.”

Berutti kept an eye at the net while Bociek was hitting her shots.

“I was playing mostly at the net and let Tori hit the ball,” Berutti said. “Although, I hit some lobs over the net.

“The wind and cold didn’t bother us. We practiced in that every day. There was no need for us to adjust.”

“I just wanted to make sure to get most of my shots in,” said Dahl. “I tried to angle my shots and leave the court open which gave me a few more options. The wind affected some of my serves. Otherwise, it wasn’t much of a factor.

“This is my first year playing singles. It was kind of a big adjustment. It was hard to get used to singles at first, but now I enjoy singles more.” 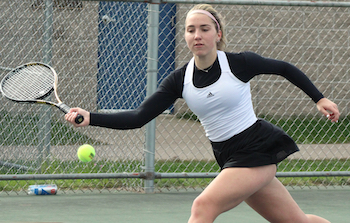 “I was definitely surprised by the margin of victory,” said Mongrain, who plans to attend Northeast Wisconsin Technical College in Green Bay to major in dental hygiene. “We battled all season and had really close scores. I just tried to play one point at a time.

“The weather seemed to change every five minutes, typical of U.P. weather. I hit the ball long all the time. For that reason I prefer to hit into the wind. I couldn’t think of a better ending. I played great players this year. There were different rules because of the virus (Covid-19), but everybody was real good about it.”

Although disappointed in the outcome, Mazurek was gracious in defeat.

“I just had my head down, although I’m happy with the season we had,” she said. “I’m glad I made it to the championship match. She came out on fire. She was really good. I’m glad we at least got to play. Covid-19 affected everybody.”

Serbentas said the title was a long time coming.

“We had real good senior leaders,” he added. “Olivia has been a great asset to our program, somebody the girls look up to. Even though she didn’t win a championship today, Olivia was a great leader. Our No. 1 doubles were outstanding all season and Aurora made the transition from doubles to singles beautifully. The girls truly deserve to win it. This was a hard year with Covid-19.”

“The girls did a great job,” said first-year Mountaineers’ coach Marcus Celello. “We have a lot of sophomores and I was happy to have the senior leadership. It was nice to see Claire come through and get a U.P. title. I didn’t play tennis in high school so this was a big learning experience for me. We can’t overlook how helpful our seniors were in my first year.”

“We had some girls who did very well,” said Gwinn coach Darcia Mattson. “This is the first time we’ve had one of our girls in the finals. Hopefully, we can build on this, and I really think we will. Having new courts in Gwinn and an assistant coach really helps.”