Dynasty and dominance too often are used to describe long-term success in sports. And assigning them to shorter-term accomplishments often takes away from teams that might be deserving of such high praise.

But when it comes to Ishpeming Westwood tennis, there aren’t a lot of words to better explain the Patriots’ hold on Upper Peninsula Division 2 over the last 11 years.

The Patriots have won 10 Finals championships during that time, all but one outright. At this season’s MHSAA tournament, Westwood claimed six flight titles and finished runner-up at the other two. And this run was kicked off by another memorable accomplishment a week earlier – the taking back of the Mid-Peninsula Conference title after three straight years finishing runner-up to UPD1 power Negaunee.

The MHSAA/Applebee’s “Team of the Month” for September accomplished all of this under a first-year coach, but hardly a first-year contributor to the program. Sarah Massie was part of four Division 2 titles as a player from 2009-12, then spent summers home from college giving clinics and private lessons to players who now fill her lineup. She watched the success from afar while getting her teaching and coaching start at Kingsford, then returned to her alma mater this fall to take over for mentor Chris Jackson, who remained her assistant and had coached the Patriots to nine of their 14 Finals titles.

“It’s pretty much a continuing of what I already knew and what I knew worked,” Massie said. “I will try different things. But as far as the program in general, I was there as Chris was building it. Whether I was playing in the program or helping out with the program, I was there for the whole process – and that definitely helped.”

A lot goes into Westwood’s annual success. But it’s fair to say it starts with attitude and perspective, which leads to incredible participation.

The program had 37 athletes this fall – which would be 20 percent of the girls in the high school if compared to its 2018-19 enrollment.

“We encourage the girls to come out, but we also have the attitude of tennis is fun,” Massie said. “It's a lifelong sport. It's great to learn it in high school so you can play it forever. The girls that want to get better and want to invest that time, that's what these coaches are here for and we encourage that and we help bring them to their next level. 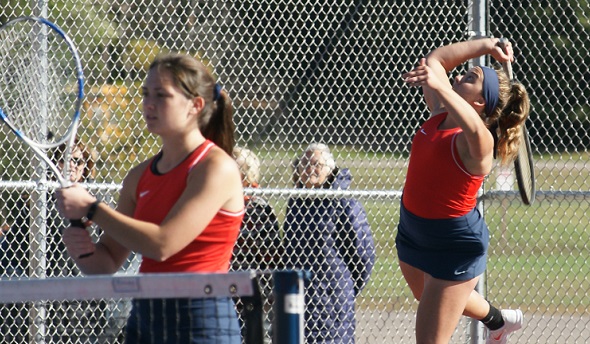 A league title generally ranks a bit lower than something won state or peninsula-wide. But in this case, claiming the MPC title had to come close in significance: Negaunee went on to finish runner-up in UP Division 1 this fall after winning that championship five straight seasons.

Westwood had split with the Miners in a pair of duals leading up to the league tournament Sept. 26.

“The best part of MPCs was when the day started, we knew we could win and we knew Negaunee could win. So there wasn’t the pressure of ‘we are supposed to win this,’ and also not the downfall of ‘Negaunee should win this.’ We came into the day (saying) we have no idea what’s going to happen, but we know we can win. So let’s just play our best, worry about the things we can control, and see what happens.”

After winning that first match against Negaunee this fall 5-3, the Patriots fell in the rematch by the same score. The two teams played in the championship match at every flight at the league tournament, with Westwood coming out on top 6-2.

That served as a preview of the UPD2 Final a week later, where the Patriots also won six flights and finished runner-up at the other two.

At both the league and Finals tournaments, Madi Koski (No. 1), Tessa Leece (2), Jillian Koski (3) and Jenna Wealton (4) swept singles championships. No. 3 doubles Avery Mariuzza and Emily Nelson also won at both the league and Finals events, while No. 4 Claire Gilles and Natalie Prophet was a Finals champ and No. 2 Elle Miller and Meghan Johnson won at the MPCs. Top doubles pair Katelyn Antilla and Karlie Patron finished runner-up at both tournaments.

No flight finished undefeated this fall, but none suffered more than four losses. Leece was 16-1 and Wealton 18-1 and avenged her only defeat, while Madi and Jillian Koski both finished 16-3. Miller and Johnson at No. 2 doubles finished 17-2, their only losses both to the pair from West Iron County. As a team, Westwood’s only other defeat came to Marquette, the eventual Division 1 champion.

This had been the dream for Massie, who once she decided to go into education knew that returning to Westwood would be her ultimate goal. As an athlete for the Patriots she won No. 2 and No. 4 singles titles and finished runner-up twice at No. 1. Now she’s 1-for-1 leading the program to the top team accomplishment – and with that league title an added bonus on which to build in the future.

“It seems every year we end up with a good group of girls who are fun to coach,” Massie said. “We had five seniors in the varsity lineup, and they were all great kids and fun to be around, and hard workers.” 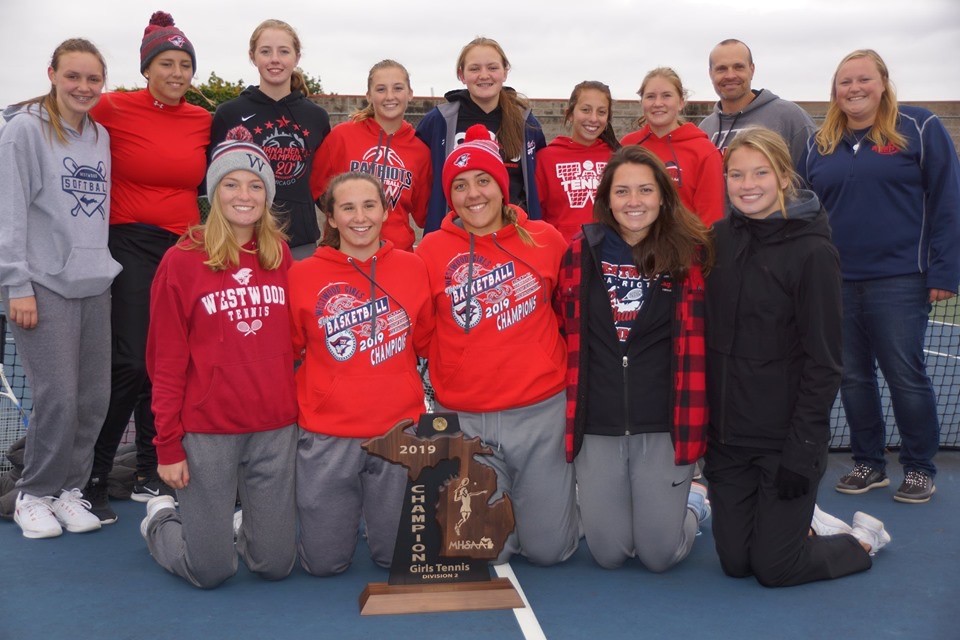 PHOTOS: (Top) Westwood’s Tessa Leece returns a volley during a No. 2 singles match this season. (Middle) Katelyn Anttila and Karlie Patron serve during a No. 1 doubles match. (Below) The Patriots celebrate their latest Upper Peninsula Division 2 championship. (Photos courtesy of the Westwood girls tennis program.)