ISHPEMING – The Westwood girls tennis team has built a dynasty in the Upper Peninsula, and on Wednesday, it added another title to its trophy case.

It wasn’t easy though. After sharing the title with Munising last season, the Patriots had to hold off Iron River West Iron County at the end and edged the Wykons by one point at 17-16 for the Division 2 championship. Westwood has won eight of the last nine U.P. titles in its division.

“This was just a successful year,” Westwood head coach Chris Jackson said. “Heading into this year, we had to replace nine girls and we weren’t sure where we would be. I think most people thought this was going to be a rebuilding year, but we had some girls step up big for us.”

Munising took third at the meet with 10 points followed by Iron Mountain (8) and Ishpeming (5).

Westwood was led by its doubles teams as it won three of the four final matches including a three-set thriller by the tandem of Karlie Kargela and Karlie Patron at No. 1 (7-5, 4-6, 6-4). The Patriots also had two-set wins at both No. 3 with Hailey Mattila and Katelyn Anttila and No. 4 with Ellie Miller and Kaylee Larmour, while West Iron’s Emily Nelson and Avery Bosiek took the No. 2 match.

For West Iron County, it was a disappointing day as the Wykons were in six of the final eight matches but only picked up two victories. West Iron was in a similar situation last season and head coach Joe Serbentas said his team was determined to make up for that this year. However, it just wasn’t meant to be.

“We were disappointed last year, so the girls worked really hard to get back here and they wanted it badly,” Serbentas said. “I thought we really put ourselves in a good spot with seeds today to come out and win.”

On the singles side of the court, it was Munising’s time to shine. The Mustangs won the Nos. 1 and 2 matches thanks to strong performances by the Ackerman sisters, Marissa and Kelsea. Marissa won the No. 1 match over West Iron’s Katarina Serbentas, and Kelsea defeated Iron Mountain’s Jordan Stoner in the No. 2 competition. Marissa hasn’t lost a match in three years. 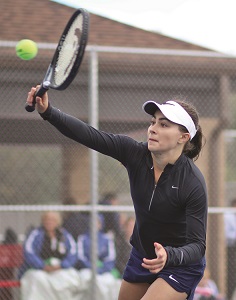 “Our singles have been the strength of our lineup all year,” Munising head coach Rod Gendron said. “Unfortunately, we didn’t have enough depth today with doubles to win the title, but I’m very proud of how the girls competed. They’ve had some tough matches and on days like this, people are playing their best, so it’s not easy to win.”

Gendron also praised both Ackerman girls and explained how even though they may be related, their styles are completely different on the court.

“They both have a lot of experience and they both have been U.P. champs, so they know what it takes,” he said. “They do not give up no matter what the score is. They keep fighting and they make you earn everything. Marissa is a little more competitive, while Kelsea has nicer strokes. Marissa will do anything to win like throwing lobs or ugly shots while Kelsea is a more classic style player with good strokes and a strong serve. That’s the big difference between the two.”

“Tessa hasn’t gotten a lot of publicity this year, and that’s hard as a No. 4 because everyone wants to talk about the No. 1s,” Jackson said. “I don’t know if I’ve ever seen anybody as composed as Tessa. No matter what the scenario, she maintains her composure, competes at a high level and learns from her mistakes.”

Ishpeming’s lone appearance in the finals was at No. 3 doubles where Audrey Stetson and MaKenzie VanBuren fell to Mattila and Anttila. Even though it wasn’t the day they were hoping for, Hematites head coach Erl Langness saw some positives in his team’s performance.

“We won the spots where we had seeds,” he said. “Madison Pruett had an excellent match against the girl from Munising (Marissa Ackerman) and our No. 1 doubles also had a good day. They lost to West Iron in three sets. It was a pretty good day. We would’ve like to do better, but we did okay. I think we’ve made a lot of progress since the beginning of the year.”

In the end though, the day belonged to Westwood. And even though the outcome came down to the wire, Jackson liked it that things turned out that way.

“Close matches like these make the tournament fun,” he said. “It came down to how the finals went, and that’s how it should be.”

PHOTOS: (Top) Munising's Marissa Ackerman returns a volley during a No. 1 singles match Wednesday at the U.P. Division 2 Finals. (Middle) Westwood's Karlie Kargela returns a shot at No. 1 doubles. (Photos by Rachel Oakley.)