Between 1982 and 1987, Sue Latter-Addison was considered among the top 10 women runners for the 1,500 meters/Mile according to Track and Field News.

In 1986, she became only the eighth female in U.S. history to break 4:30 in the mile with a time of 4:23:93 at the Nikaia meet in Nice, France. Over the years, she ran with and against some of the greatest of all-time, including Mary Decker-Slaney. As a junior at Michigan State in 1977, she earned All-American honors in the outdoor 800 meters.

As a coach, she was named NCAA Division III Midwest Region Women’s Cross Country Coach of the Year in 1999, in her third season at Wheaton College. Her previous coaching stops included stints at Brown University, Colorado, Florida State, and most recently at Hope College. Running professionally for Reebok and Nike, she competed around the world.

“We were fortunate to come along when we did,” said Latter-Addison, recalling some of the track trailblazers and a time when participating in high school sports was not a possibility for girls. “If we had been born a couple of years before, we wouldn’t have had the opportunities that we did.”

Sue Latter was a 16-year old junior at Clarkston High School in January 1973 when the 6th U.S. Circuit Court of Appeals upheld a 1972 ruling that allowed girls to compete in varsity, non-contact sports with boys in Michigan. Since her high school didn’t have a girls track team, she joined the boys team.

“(Running with the boys) had advantages and disadvantages,” she said a few years later to the Lansing State Journal while running for MSU. “It did make me work harder, and my teammates were always encouraging me.”

The arrival of the first MHSAA Girls Track and Field championships in 1973, won by Marquette in the Upper Peninsula and by Lincoln Park in the Lower Peninsula, was the culmination of many things. 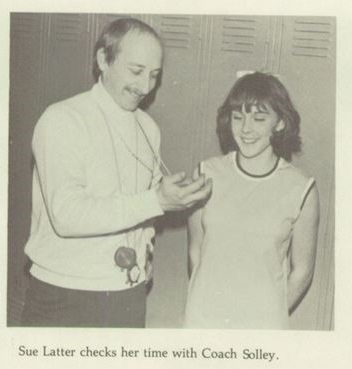 The nation’s view of the female in society was rapidly changing. In many cases, the battle for the chance to compete against others was led by parents who believed in the educational value of athletics, and saw that opportunity denied because of gender. Thanks to their efforts, walls that prevented girls from enjoying opportunities that once were exclusively reserved for males began to crumble. Among those barriers were rules that prevented girls from competing athletically. Title IX, along with other lesser known lawsuits, meant rapid expansion of sports in Michigan and across the United States.

A survey of MHSAA member schools during the 1969-70 school year found 59 districts offered track for girls. A year later, 69 schools offered the sport. In April of 1972, the MHSAA announced plans to expand girls state tournaments to five sports – Tennis, Swimming, Gymnastics, Golf, and Track – during the 1972-73 school year. One year previous, gymnastics was the only one offered, beside skiing regionals that allowed teams containing males and females.

With the announcement, the number of girls prep track programs shot up to 150. However, Clarkston wasn’t amongst them.

“I liked competing and enjoyed running and realized I was pretty fast,” recalled Latter-Addison. “Obviously there wasn’t much to choose from. I liked individual sports, where you’re responsible for yourself and your own success. Coach, (Errol) Solley gave me a chance.”

“She had a lot of talent,” said Solley, now a resident of Florida who returns to Michigan for the summers. “She wanted to run. We didn’t have a girls team at the time. It was a time when things were changing and changing fast.”

A few other girls had joined Latter on the team, but by the 1973 track season’s end, she was the only female still working out with the boys. Solley entered her in the girls regional state meet at Madison Heights, where she won the 880 and 440-yard dashes. With the wins, Latter advanced to the state meet, hosted at East Lansing High School.

She was one of 366 entrants from 119 schools at the Lower Peninsula meet, open to all schools regardless of enrollment classification in that first year. In the Upper Peninsula, 29 teams competed at Iron Mountain for U.P. honors.  In 1974, the L.P. girls event was split into two, one for Class A and B schools and a second for Class C and D schools. In 1975, events were run for each of the state’s enrollment classifications. In the U.P., the event was segmented into Class A-B, Class C and Class D beginning in 1974.

And, like many others, Latter was the only qualifier present to represent her high school. According to the State Journal, Latter’s clocked time of 57.1 seconds set a national schoolgirl record in the 440-yard dash that year. She also won the 880 run with a time of 2:17.7.

Solley proudly relayed word to the Clarkston News that the University of Michigan girls coach had said he “hadn’t seen anything like her comeback from 880 to the 440 within an hour.”

“She opened up a lot of eyes,” recalled the coach more than 40 years later. “When you have a girl win two state championships, that will happen.”

Running second in the 880 was Sue Parks of Ypsilanti High School, who finished at 2:18.3. Park’s father Bob was head coach of Eastern Michigan University’s men’s track and field and cross country teams for 34 years. Like others, he had fought hard for his daughter’s right to run, and the 1971-72 school year found her practicing with the track team at Ypsilanti.

Anita Lee of Detroit Cass Tech was the day’s other double winner. In 1970 as a 12-year-old, Lee’s name landed in “Faces in the Crowd,” still a feature of every issue of Sports Illustrated, for setting “her seventh world age-group record with a long jump of 18'6¼" at the U.S. Youth Games in New York.”  According to the magazine, she already held the 10-, 11- and 12-year-old girls world records in both the long and high jumps.

A sophomore in 1973, Lee won both the long and high jump in the MHSAA’s open meet. A year later at the Class A-B track championships, she won the long jump, the 80-yard hurdles, then ran the opening leg of the 880 relay, also won by Cass Tech. As a senior in 1975, Lee grabbed the top medals in both the long jump and high jump at the Class A championships. Like Latter, she would compete at Michigan State after graduation. There, she would post jump records that would last for years.

“When you have success, it is addicting,” said Latter-Addison.

Unfortunately, Latter’s success didn’t translate into a girls track team. Clarkston still didn’t sponsor a girls squad in 1974, her senior year. So she and some other female classmates accepted their only option and ran with the boys squad. Now running the 100 and 220, Latter was Oakland County champ in both events at the first county meet, held at West Bloomfield High School. Ready to return to statewide competition, suddenly a roadblock appeared.

“A question of Sue’s eligibility arose last weekend as she and three other Clarkston High School girls prepared to run in the regional meet” at Madison Heights Madison, stated the Clarkston News that May.

“Because Clarkston did not field enough girls for a girls track team, the co-eds had practiced with the boys’ team and ran practice in their meets. They … ran afoul of a new athletic rule which says that a boy or girl must elect which team they will enter competition with.”

As explained by a school official, “if a girl decides to play with the boys’ tennis team, for instance, she cannot play with the girls team.” 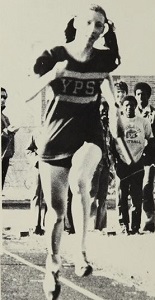 Since there was not a girls team at Clarkston, officials were unable to present a clear ruling on eligibility, and it was initially decided that the girls would not be allowed to run in the qualifying regional.

“I was very emotional,” said Latter-Addison, recalling the incident.

Clarkston school officials had said they had no intent of violating state rules. Unable to get a clear cut decision, ultimately Latter and her three female teammates, Vadna Seyler, Judy Henderson and Nancy McAlevy, were allowed to compete. Latter was the only Clarkston girl to qualify for a trip to the state finals, but at the conclusion of the meet, it remained uncertain if there had been a violation.

Similar occurrences happened around the state, and confusion reigned. Ultimately, it was decided that the rule needed to be re-examined. The performances were accepted and Latter was cleared to run at the state meet, held in Grand Rapids in 1974.

There, she finished second in both the 100 and 220 to Josephine Hobbs of Detroit Central. Hobbs would win both events again in 1975 and 1976, and then run for Delaware State.

All were pioneers, shattering pre-conceived notions about girls and athletics. While it may seem a clichéd phrase, those early participants truly paved the way for today’s female athletes.

For Sue Parks, the freedom to run competitively led to a fabulous college cross country career at Eastern Michigan University, as well as a bachelor’s degree in 1980 and a master’s degree in 1988.

During her college days in Ypsilanti, she served as head girls track coach at Ann Arbor Gabriel Richard High School in 1982 and head girls cross country coach at Ann Arbor Huron from 1979 to 1983. That was followed by a coaching career that included years at the University of Michigan, Michigan State, the University of Arizona, and Ball State before returning in 2006 to EMU.

There, she still heads the women’s track and field and cross country coaching staff.

“Look how far it’s come,” stated Latter-Addison, remembering the challenges and opportunities that came from the chance to compete.

Her daughters with husband Ron Addison, an All-American runner at the University of Tennessee, earned MHSAA state championships while at Grand Haven High School. Both Becca and Laura Addison later ran for the University of Michigan.

“I wasn’t awarded an athletic scholarship at Michigan State until my junior year,’ Latter-Addison said. “They simply didn’t exist for girls. Back then, you had to be happy with a free pair of shoes. Today, the opportunities are there.”

PHOTOS: (Top) East Lansing's Betsy Leverich takes the baton from Cathy Mueller (right) during the first MHSAA Girls Track & Field Finals in 1973, as captured by the Lansing State Journal. (Middle top) Clarkston's Sue Latter stands for a photo with coach Errol Solley. (Middle below) Detroit Cass Tech's Anita Lee was among the earliest Michigan high school female track stars. (Below) Sue Parks also was an early star and the daughter of a collegiate coach who went on to compete at the next level. (Photos provided by Ron Pesch.)