A year after finishing runner-up, the Trojans nabbed a team championship with 56½ points. Lansing Catholic was second with 41, and Shepherd took third with 33.

It was a prolific final performance by senior Megan Rosales that sparked the victory, as she played a role in four wins for the Trojans. Rosales, who won the 400 meters in 2015, was runner-up in the 300 hurdles and part of the winning 800 relay last season, made her last meet count with a season-best time of 57.02 seconds to win the 400, and a first-place run of 45.05 in the 300 hurdles. She joined teammates Delaney Stersic, Sierra Hernandez and Chelsea Short as the fastest 800 relay squad (1:44.11) and she anchored the 1,600 relay to a repeat title in 3:57.80. Short, Stersic and Hernandez ran the first three legs.

“Today was definitely one to remember,” Rosales said. “We took the saying ‘going out with a bang’ to a whole new level. None of this would be possible without all of (these girls). I'm so proud of you all and everything that you girls have accomplished. This is what we've all worked for. It all paid off in the end. No better way to end my high school running career.”

The Trojans enjoyed all-state efforts by Kiarah Horn, who was third in the pole vault with a height of 11 feet, and Anne Wong, who tied for eighth in the same event at 10 feet. Chelsea Short registered a sixth-place time of 26.24 in the 200. 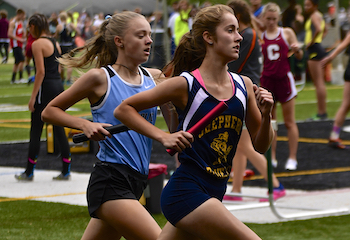 Shepherd may have had to settle for third place overall, but the program delivered a third MHSAA title in four seasons in the 3,200 relay. This time, however, the team clocked a Division 3 meet record time of 9:18.06. It was the quartet of Rachel Mathers, Katelyn Hutchinson, Kylie Hutchinson and Amber Gall that now boasts the best of all time, dethroning Benzie Central’s 2011 performance of 9:22.71. Gall also won the 800 in 2:14.81.

Lansing Catholic junior Olivia Theis was the best of the bunch in the 3,200, which featured two sets of sisters among the all-state top-eight performers. Freshman Jaden Theis was third for Lansing Catholic in 10:34.73, while Hart sophomore Adelyn Ackley was runner-up (10:34.47) and junior Alayna Ackley placed eighth in 11:07.30.

Olivia Theis completed the distance double with a championship in the 1,600, winning by more than five seconds with a personal-record of 4:50.10. Adelyn Ackley recorded a second-place time of 4:55.53, while Jaden Theis was third in 4:55.81, setting the stage for some exciting races to come.

PHOTOS: (Top) Adrian Madison's Megan Rosales pulls away from the field during the 400 in helping her team to the overall championship. (Middle) Shepherd, right, and Lansing Catholic also put up strong performances at Saturday's Division 3 Finals. (Click to see more from HighSchoolSportsScene.com.)