By John Leerar
Special to Second Half

“Things weren’t going the way I thought they had to go the first half of the day,” Schafer said. “I thought we were going to have to score in the upper 40’s to win. And even with a perfect second half of the meet, that wasn’t going to happen. It was going to be an OK day.”

When asked where she thought her team would finish at that point in time, Schafer responded, “Third or fourth.”

However, the lower-than-anticipated point total turned out to be enough, as the Warriors won the meet and their first MHSAA Finals title with 34 points. Lansing Waverly was second with 31.

Chippewa Hills did not win a single event, but scored points consistently enough to build a lead.

“We scored in six events today, which is the most we’ve ever scored in since I’ve been coaching,” Schafer said. “All of the girls came through at the end and ran consistently across the board today. We faltered a little bit, and were disappointed here and there, but when it came down to the last race, they got it done and did what they needed to do.” 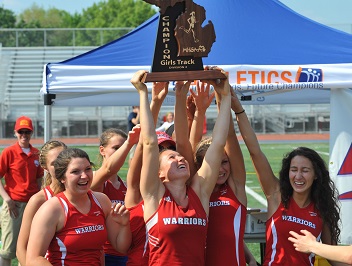 The race Schafer was referring to was the 1,600 relay, the last event of the afternoon. The Warriors came into that race 10 points ahead of Waverly, the top seed for that event. Chippewa Hills had to place in the top eight to secure the championship and did so, finishing sixth in a time of 4:03.87.

Senior Megan O’Neil was a major contributor for Chippewa Hills, scoring 16 points by herself with second-place finishes in the 800 and 1,600 runs.

“It hasn’t sunk in yet that (the 1,600) was Megan O’Neil’s last race,” Schafer said. “But she’s going to go on to bigger things. I’m sure she’s very happy her high school career ended like this.”

Schafer also made sure to give credit to her entire team. “This championship still took our entire team. We had 10 girls here today who all helped us win,” she added.

The LP Division 2 1,600-meter record fell at Houseman Field. Junior Karrigan Smith of St. Johns edged out the previous record of 4:51.67 in that event, running a 4:51.53 while beating the rest of the field by more than two seconds.

“It’s such a great feeling,” Smith said. “This is the first state championship in my school’s history for the girls, so it’s a really important moment for me as well as my team. I’m just so thankful to be here.

“My goal during the race was to stay behind the lead girl and kick it in the last 200 meters. I’m just happy that I could execute today, and it’s a great feeling. I had no idea I was even close to the record until my teammates informed me.”

Spring Lake also made its presence known. The sister duo of Allie and Gabriella LeRoux took first and second, respectively, in the pole vault. Allie, a senior, finished with 11 feet, 8 inches, while her freshman sister Gabriella vaulted 11-5. Junior Carlyn Arteaga won the 800, finishing in 2:16.09.

“I’m happy with my performance today,” Arteaga said. “I’m glad everything worked out. My best time before this was 2:17, so this is a PR (personal record) for me. I qualified for the 400 as well as this race, but I decided to just concentrate on the 800. I wanted to go all in on this race and it paid off. I just started running the 800 as my main event this year, so I’m very happy about how it turned out.”

“I’m still in shock about today. I’m so excited about my performance,” she said. “I was especially satisfied with my discus throw, which was a personal record by about six feet.”

Other field winners include Charley Andrews of Battle Creek Harper Creek in the high jump and Gabriella Collins of Mount Morris in the long jump. Race winners include Alison Rich of Haslett in the 100 hurdles, Josie Yesmunt of DeWitt in the 100 and 200 dashes, Zoe Eby of Carleton Airport in the 400, Hannah Coverdill of Marine City in the 300 hurdles and Kaela Theut of East Grand Rapids in the 3,200 run.