GRAND RAPIDS – Fowler girls track coach Jill Feldpausch might have felt like she won the lottery Saturday afternoon, even though she said she “didn’t have a winning ticket.”

The lack of a “winning ticket” that Feldpausch referred to was her team failing to have an individual champion at the MHSAA Lower Peninsula Division 4 Finals at Houseman Field. A bevy of solid performances, including three relay titles, led Fowler to first place with 56 points. Concord was second with 44, and New Lothrop was third with 38.

“We don’t have a winning ticket. We have two awesome seniors who really stepped up,” Feldpausch said. “We just do what we train for. We keep coming and working hard, and it seems like every meet they kept setting personal records one right after another.”

It was the seventh state championship for the Fowler girls program and third with Feldpausch as coach. Last year, Fowler was runner-up to Harbor Springs.

“After finishing second last year and third the year before that, our team was ready to finish it and ready to get first,” said Madison Koenigsknecht, one of those two “amazing seniors.”

Julie Thelen, the other “amazing senior,” said, “We got closer and closer every year, and this year it was like the big bang – the perfect finish – and it was just awesome. It was amazing since we all worked so hard all season.”

“I think everybody working together in the relays really put us over the edge,” Madison Koenigsknecht said.

That third winning relay was a collection of the classes as senior Madison Koenigsknecht, junior Ashley VanElls, sophomore Kian Becker and freshman Morgan Goerge won in 9:38.0.

“In the individual events, everybody picking up points here and there really made a difference,” Madison Koenigsknecht said.

In the field events, Fowler sophomore Ciera Weber was fifth in the pole vault as she cleared 6-0 to break the school record. Freshman Alyssa Vandegriff was fifth in the high jump at 5-0.5, and Horak was sixth in the long jump (15-11.5). 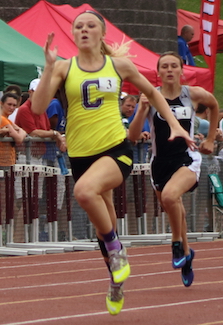 It was truly a team championship.

“Everybody stepped up, and I’m so proud of them,” she said. “It was all about the team aspect, and our 12 girls here all contributed.”

Concord, which finished second after placing third a year ago, was led by senior Lindsey Lehman, who repeated as champion in the 200 and also won the 100 after finishing second a year ago. She appeared a bit surprised at her victory in the 100 as she was seeded fourth coming into the meet.

“I was shocked that I won the 100,” said Lehman, whose winning time was 12.30 seconds, breaking the Division 4 meet record. “The girl who got third beat me at Regionals, and she’s a really good runner. She’s only a sophomore.”

After winning the 100, Lehman was able to set her sights on repeating as champion in the 200 in what would be the final individual event of her high school career. She won it in 25.70.

“I got out of the blocks really well, and that was one of my better races,” she said. “I just always feel good in that race.

“I wanted to prove that how much work you put in during the offseason can determine the outcome.”

Concord had another individual title. Sophomore Samantha Saenz won the 1,600 in 5 minutes, 10.89 seconds.

New Lothrop, which finished third, had a championship in the 400 relay. Skye Nancarrow, Alex Bedrosian, Sydney Pope and Caitlyn Bruff won in 50.83. Pope and Bruff are freshmen.

Another meet record was broken in the 100 hurdles, where Mary Leighton of Mendon won in 14.53. Sophomore Baleigh Irelan of Reading added a victory in the 300 hurdles in 46.25.

In the field events, Sydnie Avery of Saugatuck won the pole vault at 10-3, and Akwia Tilton of Birmingham Roeper took the long jump at 17-6.

PHOTOS: (Top) Fowler's Julie Thelen (middle) works for valuable points in finishing third in the 800. (Middle) Concord's Lindsey Lehman breaks away for one of her two sprint championships. (Photos by Angie Graham/RunMichigan.com.)